Sick of homophobia at the barbershop, she responded by buying a pair of scissors. 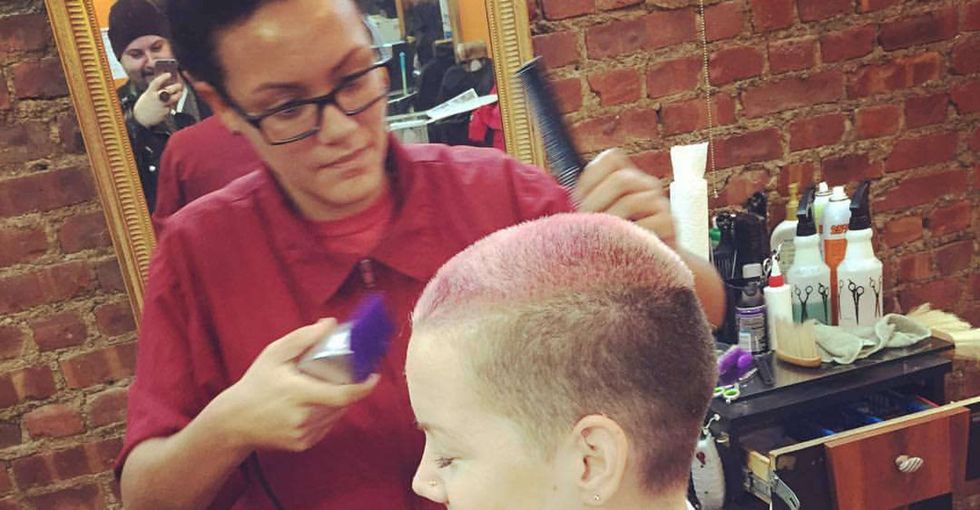 Dez Marshall first cut her hair short in high school.  It was a look she loved for herself, and one she had to fight for when she decided to try out a new barbershop in college.

"I was trying to explain to them that I just want something really low, wanted a nice shape-up, and the barber was like, ‘Oh, you want the lesbian haircut?'" Marshall said.

It wasn't the first time she felt uncomfortable in a barber's chair, and it wouldn't be the last.

"Being a woman, being queer, there’s a lot of weird questions that different barbers would ask me that just felt really invasive."

Marshall graduated and moved to New York City, where she found a job as an organizer — mentoring queer youth of color and advocating for their safety and access to public spaces. As she got to know her colleagues, she was struck by how many of them had similar stories: encounters with well-meaning but clueless stylists who were confused when their requests didn't match the stylist's own expectations about how they should want to look. Prurient questions about their dating lives. Dirty looks from other customers.

Marshall decided to take matters into her own hands — and bought herself a pair of clippers.

Marshall began cutting hair in 2013 with the goal of offering her queer, trans, and gender-nonconforming customers a stylish, no-drama trim.

Marshall at barber school in 2013. Photo by Dez Marshall/Instagram.

She currently works at The Gamesman — an established barbershop on Court Street in downtown Brooklyn — where her predominately young, LGBTQ clients mix comfortably with a large contingent of old-timers.

Marshall, initially nervous that friction might develop with the shop's older clientele, attributes her success at integrating to her former boss, Frank Shami, who passed away in August.

"Frank was very old-school, but Frank also lived by this code of: You respect people and people respect you," Marshall said.

Marshall quickly established herself at The Gamesman, with Shami as mentor, talking up her skills and frequently complimenting her clients' cuts. Though she sometimes argues politics with the other customers in the shop, Marshall says her fellow barbers and most of the regulars have embraced her presence there — and more importantly, have made room for her clients to be themselves and chat openly about their lives without judgment.

"It always makes everything easier when you don’t have to fight or prove to someone that you belong in the space," she said. "Frank just welcomed everybody. That made my job a lot easier."

With Shami's death, Marshall plans to move from The Gamesman to Colleen's House of Beauty, a few blocks away.

"It’s hard for me to remember my pre-Dez haircut time," said Emmett Findley, one of Marshall's long-time clients.

Growing up in Michigan, Findley, who identifies as trans, often struggled to reconcile his gender identity with his outward appearance, which he felt "didn't match up." He found Marshall through a Facebook networking group for LGBTQ New Yorkers after moving to Brooklyn eight years ago, and he credits her for finally giving him the haircut that he "wanted but didn’t even know that I wanted."

"The more masculine a haircut for me, the more masculine I can present, which is what I’m going for," Findley said. "It can help me feel safe in spaces where, historically, I haven’t felt so safe."

Working with a barber who understands that, he said, helps him feel confident in his presentation and experience. Since finding Marshall, getting his hair cut, which was something he only used to do when necessary, has become a source of enjoyment for the Brooklynite.

“Now I go really regularly. It’s a form of my own personal self-care. I go every two weeks without fail. I put it in my budget."

Though Marshall will "cut anybody that wants to sit in her chair" — she sees a number of straight, cis clients as well — creating a nonjudgmental space for her LGBTQ customers to let their guard down is a critical part of her work.

"It’s really nice to enter a community space where you feel seen and your voice matters," Findley said.

Marshall said she takes special care to ask new clients for their preferred gender pronouns, how they want their hair to look, and about what sort of experiences they've had with past barbers or stylists to ensure she doesn't repeat mistakes. Conversations with customers are often "surface level" at first, but her goal as those relationships develop and deepen for the 20 to 40 minutes they're in her chair is to make her clients feel safe discussing everything from their relationships to struggles with their gender identity to medical treatments.

That sense of openness and intimacy, she said, can be hard for her LGBTQ clients to find — not just in barbershops and salons, but in too many spaces, public and private.

"[As] you start seeing these people on a weekly basis or a monthly basis for a year or more, you become part of each others' lives in different ways," Marshall said. "And no one should have to censor their lives because others might feel uncomfortable."

Making room for those conversations and helping her clients achieve looks that boost their confidence, Marshall said, is why she sees cutting hair as an extension of her advocacy for her community — one that allows her to make a real difference in people's lives.

Marshall with a client. Photo by Dez Marshall/Facebook.

"As an organizer, you can be working for years and never achieve a win on the issues that you’re organizing around. With cutting hair, I achieve a win after every single client."

For her customers, the appeal is even more obvious.

"I get complimented all the time on my hair, and I’m glad to have that on record," Findley said.