She started doing track and field at age 60. Now, at 84, she's a competitive pole vaulter. 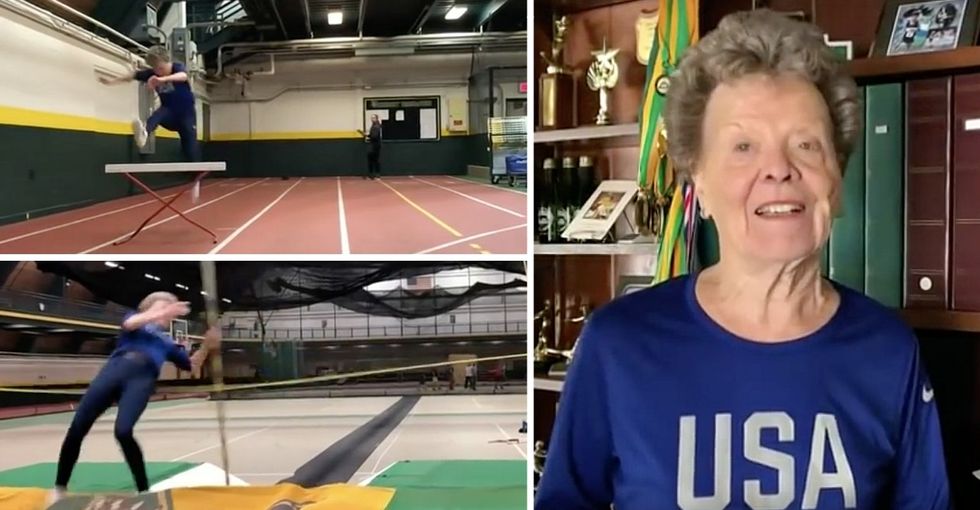 There's a new Flo on the field, and she's proving that age really is just a number.

While many of us hope to make it to our eighties in relatively good health, Flo Filion Meiler is setting a new bar for aging well. The 84-year-old from Shelbourne, Vermont is currently at the World Masters Athletics Championship Indoor in Poland, where she is competing in track and field events including the 60-meter hurdles, 800-meter run, 4 x 200m relay, triple jump, long jump, pentathlon, and pole vault.

She's guaranteed a win in the pole vault since—perhaps unsurprisingly—she's the only competitor in her age group. Four years ago she set a world record for women's pole vault at age 80.  Talk about #AgingGoals.

The petite athlete has always been physically active, playing competitive tennis with her husband and water skiing. But she didn't start doing track and field events until a friend suggested she try the long jump at the Vermont Senior Games. Twenty-four years ago. When she was 60.

Pole vaulting, as a reminder, involves running full speed with a long, fiberglass pole in your hands, sticking it in the ground, and then using said pole to fling yourself over a bar hoisted above the ground. “You really have to work at that,” Meiler told the Associated Press. “You have to have the upper core and you have to have timing, and I just love it because it’s challenging.”

Meiler turns 85 in June, which will push her into a new age category in track and field competitions.

The senior wonder shows no signs of slowing down, and she plans to just keep on setting records.

"I do train five days a week," she says. "And when I found out I was going to compete at the worlds, I’ve been training six days a week because I knew I would really get my body in shape.” Again, this woman is 84 years old.

Dr. Michael LaMantia, director of the University of Vermont Center on Aging, told the AP that Meiler’s athletic achievements are remarkable and should be celebrated. “She can serve as a role model for other seniors,” he said.

Ya think? She's already my role model, and I'm forty years younger than she is.

You go, Flo. Thanks for the reminder that age really is just a number.