Scientists tested a theory of human nature on toddlers. The results are delightful. 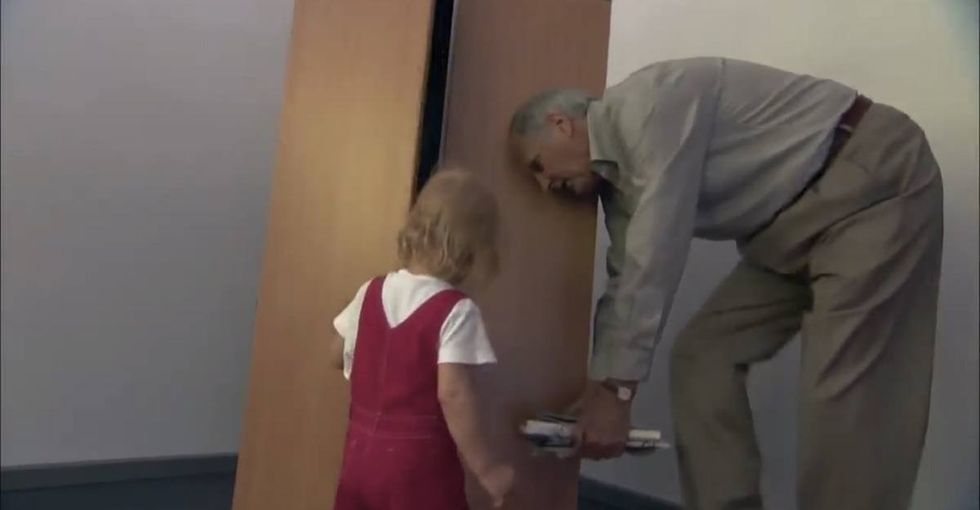 Since the 18th century, capitalism has been all about the assumption that we humans are fundamentally driven by self-interest.

This idea has become so pervasive that most people just accept it as true. Especially folks in power.

Sure, the thinking goes, we'd like to be nicer and more generous, but that's just not how we're built.

Well, Dr. Felix Warneken is here to prove that one of the biggest assumptions behind capitalism? Yeah. It's wrong. NBD.

Dr. Warneken, now a professor of psychology at Harvard University, developed experiments to suss out what humans — in their early toddler form — are really like.

And the experiments show that, without being asked, kids are moved to help those in need.

Warneken's research shows that we have innately altruistic tendencies. And not only do we want to help our fellow man — we derive joy from it.

The results, captured on video below, are pretty striking (and freaking cute):

Watch these adorable toddlers crush one of the major myths behind capitalism:

Eight months into the coronavirus pandemic and it feels like disinformation and denial have spread as quickly as the virus itself. Unfortunately, disinformation and denial during a pandemic is deadly. Literally. People who refuse to accept the reality we're living in, who go about daily life as if nothing unusual were happening, who won't wear a mask or keep their distance from people, are preventing communities from being able to keep the pandemic under control—with very real consequences.

An ER nurse in South Dakota shared her experience treating COVID patients—some of whom refuse to believe they have COVID—and it's really shocking. One might think that the virus would become real to people if they were directly affected by it, but apparently that's just not true for some. As Jodi Doering wrote on Twitter:

"I have a night off from the hospital. As I'm on my couch with my dog I can't help but think of the Covid patients the last few days. The ones that stick out are those who still don't believe the virus is real. The ones who scream at you for a magic medicine and that Joe Biden is going to ruin the USA. All while gasping for breath on 100% Vapotherm. They tell you there must be another reason they are sick. They call you names and ask why you have to wear all that 'stuff' because they don't have COViD because it's not real. Yes. This really happens. And I can't stop thinking about it. These people really think this isn't going to happen to them. And then they stop yelling at you when they get intubated. It's like a fucking horror movie that never ends. There's no credits that roll. You just go back and do it all over again."