Ruth Bader Ginsburg shared some serious hope for the future — both hers and ours. 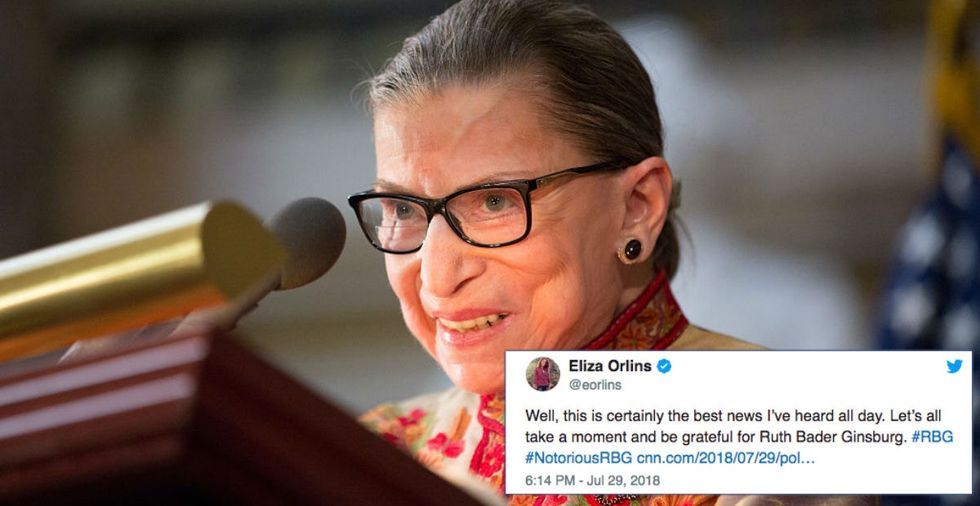 Ginsburg, 85, was attending a play on Sunday, July 29, about her former SCOTUS colleague Antonin Scalia when she was asked how much longer she expects to stay on the nation’s highest court.

She pointed to another former justice as a good barometer.

"I'm now 85," Ginsburg said. "My senior colleague, Justice John Paul Stevens, he stepped down when he was 90, so think I have about at least five more years."

In the last several years, Ginsburg has become a favorite justice amongst progressives, especially women.

It's fairly unusual for a sitting Supreme Court Justice to have developed such a cult following. But the RBG fandom is definitely at a fevered pitch. A new documentary, "RBG," explores how she’s become a pop-culture phenomenon despite being at an age when many people are well into their retirement.

Ginsburg is a beloved and outspoken member of the court, and her recent statement sent a wave of relief across social media and reassured her fans — and critics — that she isn’t planning to leave anytime soon.

She also offered some guiding words about the future.

When asked what keeps her "hopeful" about what's to come, Ginsburg didn’t mince words. Things are always in flux, particularly in politics:

What might seem overwhelming today could be old news tomorrow.

"My dear spouse would say that the true symbol of the United States is not the bald eagle — it is the pendulum," Ginsburg said. "And when it goes very far in one direction, you can count on its swinging back."

In the meantime, it’s good to know she’s sticking around to keep the pendulum a little more in check and to inspire others, assuring them that they can and do make a difference in the world.