Rosa Parks and the power of refusing to move. 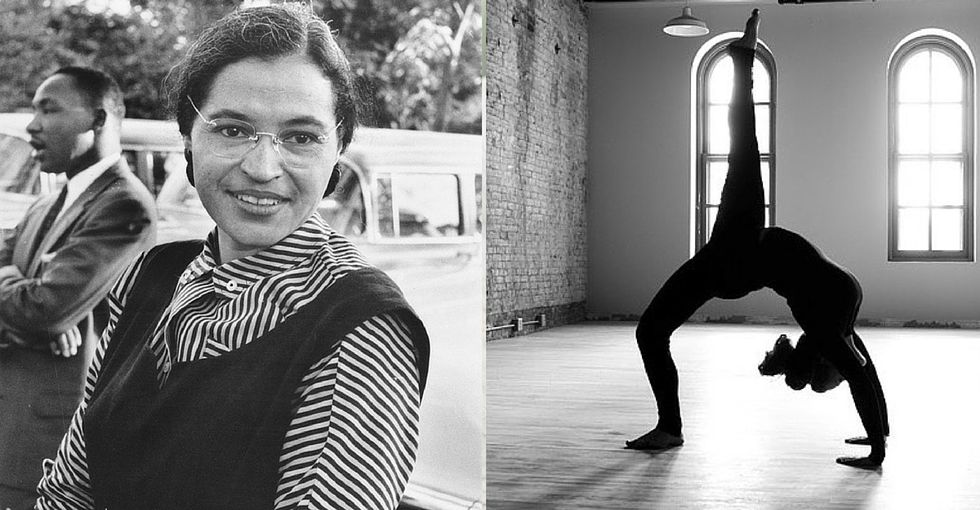 60 years ago, on Dec. 1, 1965, Rosa Parks refused to give up her seat to a white rider on a Montgomery bus and sat her way right into the history books. We all know the story.

Many of us have taken plenty of feel-good lessons from it about being brave and taking a stand. Most of the lessons focus on the huge impact of her seemingly small action. But there's also an important life lesson to be learned from the action itself.

Rosa Parks sparked a movement by refusing to move.

Sometimes, choosing to sit still is the most impactful action we can take. Sometimes what starts the movement that we so desperately need is actually our refusal to be moved.

It seems so counterintuitive. We've been taught that to change things, we must exert energy, we must fight inertia, and somehow force things to change with our movement — by tearing things down with brute force or, in some cases, running the other direction. So how can stillness actually spark radical change?

I once went to a yoga class where the mantra was "I am like the sun. I am big, I am bright, and I will not be moved."

It was based on the premise that all the other planets revolve around the sun, the center of our galaxy. I loved this idea and said it to myself every time I needed to feel grounded and resolute, confident that despite the chaos whirling around me, I did not have to move. I could stand peacefully and firm, like the immovable sun, in who I was and what I believed.

I held on to that mantra for quite awhile — until I discovered that the sun actually does move. It's just considerably harder to recognize and see the movement because of its relation to all the planets spinning around it. In other words, even when the sun looks like it isn't moving, it is.

Ready to get deep? Go with me here.

Rosa Parks was the sun that day.

In her refusal to move seats, she appeared to be still even though a huge, important shift really was taking place. As a result, she forced others to move around her. White bus patrons, police, supporters, society, and ultimately, the law.

It's clear to see how that lesson relates to activism and social change. Time and time again, from sit-ins at lunch counters and college campuses, to die-ins on the floor of city hall, we've seen how the act of being seemingly still and not moving from the scene of injustice can disrupt and ultimately transform unjust systems.

But what if we also applied that principle to our own lives?

We frantically move in the face of difficulty, disrespect, or opposition: We quit the job, we relocate, we lessen our demands, we adjust our appearances, expectations, or approach, we "fall back" to avoid the confrontation.

But if we're honest, oftentimes our actions are the same thing as moving to the back of the bus. We believe that if we are quiet, if we are accommodating, if we do what is asked of us, if we remove ourselves from the situation entirely, we will either win the respect of those who stand in our way or at the very least, we will make our lives easier.

Ultimately, we do this because we are afraid of the consequences of being ourselves, standing in our truth, and taking up the space that we deserve.

But what if we finally recognized that the cost of moving is actually greater to our identity and our souls than the cost of refusing to move — no matter how scary the immediate consequences may be?

What if the critical behavior change that will win us our freedom is finally breaking the pattern of adjusting, accommodating, and moving in the face of opposition?

What if we behaved like the sun? What if by "not moving" we were actually shifting not only our own perspective but everything around us?

Sounds good, right? But lessons like this are often easier said than done.

How do you know when refusing to move is the right action to take?

Well, here are some tips, straight from Rosa's playbook:

Refuse to move ... when you have a plan. Despite the children's storybook version of events ("Rosa Parks spontaneously decided that she was too tired to move out of her seat!"), we now know that her action that day was about as strategic as it gets. She was not the first to refuse her seat, but it had been decided that this was the moment for someone to try again — and that she was the right person to do it. The NAACP knew that Rosa's arrest would be the example that best allowed for a successful court case.

You should always think about the impact that standing firm and refusing to move could make and plan for how you will deal with the consequences, regardless of which way it turns out.

Refuse to move ... when you've done everything else and you're tired. There's a myth that Rosa Parks was tired after having worked a long day and that her physical fatigue is why she refused to stand. The truth is that she was indeed tired, but not the way most people think. From her 1992 autobiography "Rosa Parks, My Story":

"People always say that I didn't give up my seat because I was tired, but that isn't true. I was not tired physically, or no more tired than I usually was at the end of a working day. I was not old, although some people have an image of me as being old then. I was forty-two. No, the only tired I was, was tired of giving in."

Parks' response to the system of segregation did not begin on the bus that day. She had marched and protested many times before, but on that day, she knew that only a pure act of defiance would spur the change that needed to take place. The same could be true for you. If you have adjusted and changed and run and objected enough times, refusing to move might just be the ultimate act, not only of defiance, but of freedom.

Refuse to move ... when it is morally right. Sitting in her seat wasn't just a randomly selected act of protest. It was, above all, right. Rosa had principle on her side. And there is no better reason to refuse to move than when principles, values, and morals support your presence and your position.

Rosa Parks' action will, of course, be remembered forever as one of courage and will, an act that sparked a turning point in the American civil rights movement.

But it should also be an action that we turn to repeatedly as a reminder of the power of not giving in, of being still.

She showed us that great things can happen when we stay on the bus and refuse to be moved. You, me, and the sun, we rise each morning with the same possibility and power. And we, too, can change the world.