Remembering one of Alan Rickman's final roles — a student project. To help refugees.

Alan Rickman lent his voice to a viral video. 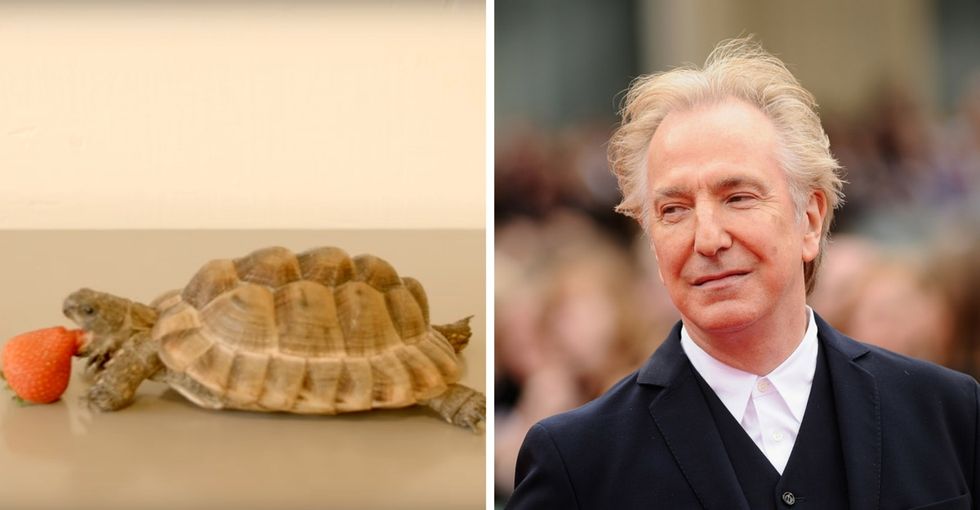 Last year, Alan Rickman teamed up with a tortoise for a very important role.

The goal was to create a viral video to raise money for refugees living in the U.K.

The 30-second video features a teeny-tiny tortoise eating a strawberry — that's it. While the miniature star of the screen chomps away, Rickman — who you may know from his roles as Severus Snape in the Harry Potter series and so much else — provides a voiceover explaining how this all works.

Here's Rickman at the premiere of "Harry Potter and The Deathly Hallows: Part 2" back in 2011. Photo by Ian Gavan/Getty Images.

So how does it work anyway? It's simple, really. You watch the video, and that's it.

The way it works is that the more views the video gets, the more advertising dollars its creator — OneClickGiving, a charity created by students at Oxford University — makes from YouTube. OneClickGiving then donates the ad revenue to Refugee Council and Save the Children. You are helping them raise that money — all just by watching a cute little video. Make sense?

These refugees were crossing through Hungary into Northern Europe. Photo by Christopher Furlong/Getty Images.

This morning, the world learned that Rickman had died at the age of 69. Many are honoring his memory.

There'll be no shortage of tributes circling around the Internet, with fans in mourning and reflection, remembering him for the big roles he played on the stage and screen during his lifetime.

But just one video lets you help the refugees in the process.