President Obama 'banned the box.' What it means and why you should care.

By 'banning the box,' he's setting a strong example the rest of the nation should follow. 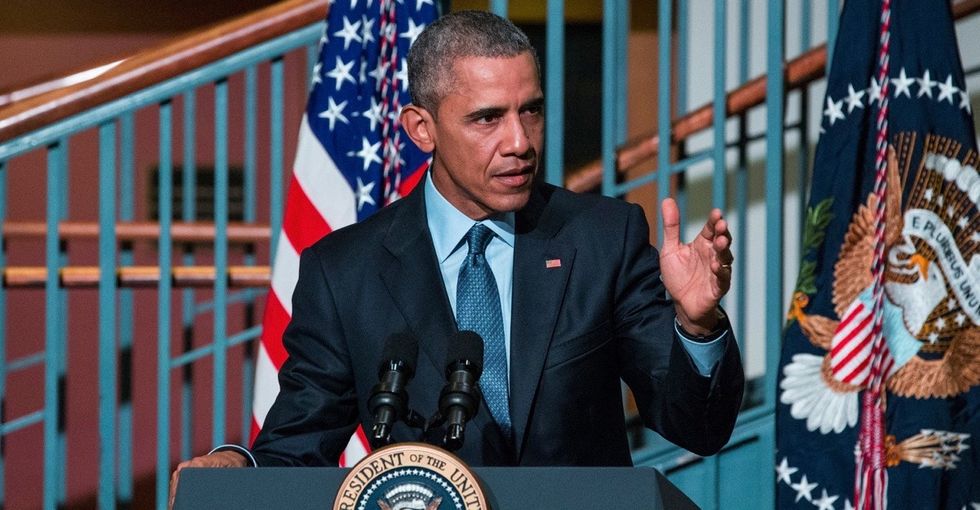 What does this mean? Well, you know how on job applications, there's sometimes a little box that asks whether or not you've been convicted of a crime? With the wave of a pen, Obama just ordered that box to be removed from applications for jobs within the federal government, saying, "We can't dismiss people out of hand simply because of a mistake they made in the past."

From today's address in Newark, N.J. GIF from The White House.

Why? Here's how MSNBC's Ari Melber explains it:

"While the rule was once seen as a common sense way for employers to screen for criminal backgrounds, it has been increasingly criticized as a hurdle that fosters employment discrimination against former inmates, regardless of the severity of their offense or how long ago it occurred."

The president's move follows a 2012 Equal Employment Opportunity Commission recommendation as to how arrests and convictions should be treated under Title VII of the Civil Rights Act of 1964.

Within the first year after their release from prison, 60% to 75% of individuals are unable to find work.

If the goal of prison — if there must be one — is to rehabilitate and reintegrate offenders back into society, "banning the box" helps accomplish that. If employers are able to quickly exclude anyone who has ever been convicted of a crime from the job pool, those with criminal records become significantly less likely (nearly 50%, according to one study) to receive an interview or job offer, and it becomes much tougher for ex-offenders to land employment.

Job-seekers attend a California job expo in 2008, when unemployment was on the rise. Photo by Justin Sullivan/Getty Images.

We spend $80 billion a year on incarceration.

When people are unable to find a job, they're more likely to find a source of income outside the law. And that puts us right back on square one, with these same individuals back in prison. No one wants that.

And even if this doesn't appeal to you on a humanitarian level, how about in terms of taking a look at how our tax dollars are spent? The truth is that it's really expensive to keep people locked up. We should be taking every step we can to ensure that people have every available opportunity to reintegrate into society upon release, and yes, that includes eliminating barriers that prevent applications from being seen.

A protester at a 2013 rally near the White House holds a sign urging the president to take action on criminal justice reform and end the War on Drugs. Photo by Alex Wong/Getty Images.

On Oct. 26, 2015, more than 130,000 signatures were delivered to the White House asking the president to issue an executive order banning the box. Photo by Larry French/Getty Images for ColorOfChange.org.

Banning the box is just part of the president's plan for criminal justice reform push.

The president is also calling on Congress to pass the Sentencing Reform and Corrections Act of 2015, which would address mandatory minimum sentences, the use of solitary confinement, and development of a system to assess the risk level of prisoners. The bill currently rests with the Senate Judiciary Committee.

In today's announcement, however, the president unveiled the creation of Department of Education adult re-entry education grants, new guidelines from the Department of Housing and Urban Development, increased training and education opportunities for people with criminal records, the creation of a "National Clean Slate Clearinghouse" for ex-offenders, and a number of other new reform initiatives.