Paul Ryan Likes AC/DC And Wants To Ruin Everything. Guess Which One He Talked About In His Speech

Seems Paul Ryan opted out of the use-facts-in-your-speech approach when he accepted the Republican nomination for Vice President. Maybe he just forgot about his own policy proposals, maybe he was just too amped up on AC/DC. Either way, here's a refresher on what Vice President Paul Ryan would actually do for our country. 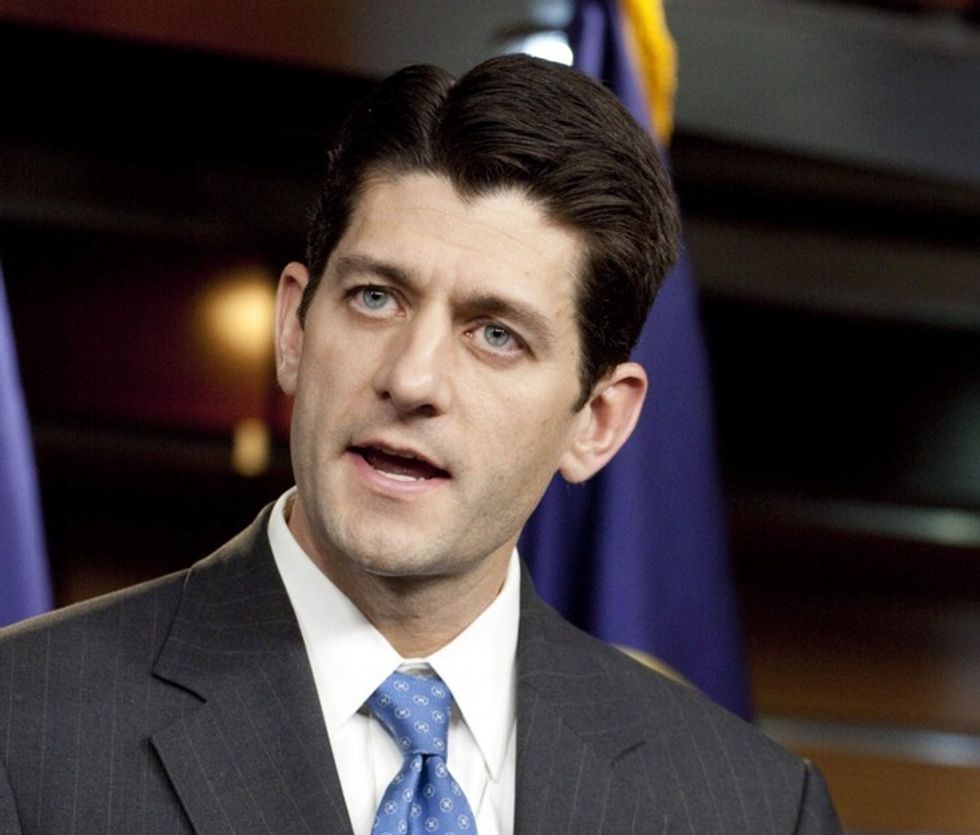 Want to be the change? Join an Elevate Giving Circle.

If you've ever donated to a cause but worried that your contribution wasn't really enough to drive real change, you're not alone. As one person, it can be tough to feel like you're making a real difference, especially if you don't have a lot to donate or if times are tough (aka there's a worldwide pandemic going on.)

That's why, for years, the idea of philanthropy felt a little bit like a rich person's thing: if you had millions, you could donate and make change. The rest of us were just tossing pennies into a cup without really doing much.

The thing is: it doesn't have to be like this. We can all make a difference, especially if we pool our money together.

Enter: Giving Circles. These are when groups of people with shared values come together to drive change. They do it by pooling their time and money together, then deciding as a circle where it should go. That way, they can cause a real targeted change in one place quickly in a very people-powered way by giving what they can, whether that's volunteer hours, money, or a mix of both. Best of all, Giving Circles are a social experience — you get to work together as a community to make sure you do the most good you can.

In other words, giving circles are a way to democratize philanthropy, making it more accessible regardless of your age, income, gender, or race.

That's why this year, The Elevate Prize, a nonprofit founded in 2019, is launching a new pop-up "Giving Circle" program so that problem solvers, budding philanthropists, and anyone that wants to do good can come together and drive real impact at a large scale. And you can do it all in just 90 minutes.

All you have to do is join one of the Elevate Giving Circles online. Learn about organizations doing good for the world, then pool your money together, and as a group, direct it where you think that donation could make the most difference.

But that's not all: every single donation made is matched by the Elevate Prize Foundation — basically guaranteeing that you double your impact for good. The theme for the first cycle is education, and Elevate Giving will match up to $75,000 in total donations for each cycle.


Ready to get involved? Elevate Giving experiences start June 26th, so sign up now for your spot to make a difference. There's no minimum fee to join either — so get involved no matter what you have to give. Now that's philanthropy for all.

From Your Site Articles
Related Articles Around the Web
philanthropy
popular

Soon-to-be ex-teacher goes off on parents who 'coddle and enable' kids. Internet applauds.

April Lavalle
via via Facebook/Julie Marburger

Teachers may be educating the future of America, but they are often underpaid, underappreciated, and overworked.

Julie Marburger, a sixth-grade teacher at Cedar Creek Intermediate School in Texas, went viral after she aired her frustrations with students, parents, and administrators on Facebook. The post was later deleted.

I left work early today after an incident with a parent left me unable emotionally to continue for the day. I have already made the decision to leave teaching at the end of this year, and today, I don't know if I will make it even that long. Parents have become far too disrespectful, and their children are even worse. Administration always seems to err on the side of keeping the parent happy, which leaves me with no way to do the job I was hired to do...teach kids.

I am including photos that I took in my classroom over the past two days. This is how my classroom regularly looks after my students spend all day there. Keep in mind that many of the items damaged or destroyed by my students are my personal possessions or I purchased myself, because I have NO classroom budget. I have finally had enough of the disregard for personal and school property and am drawing a line in the sand on a myriad of behaviors that I am through tolerating. Unfortunately, one parent today thought it was wrong of me to hold her son accountable for his behavior and decided to very rudely tell me so, in front of her son.

Marburger included these photos of her classroom in disarray, including torn up text books, broken bookshelves, and a piece of chewed-up gum stuck to a window.

Report cards come out later this week, and I have nearly half of my students failing due to multiple (8-10) missing assignments. Most of these students and their parents haven't seemed to care about this over the past three months, though weekly reports go out, emails have been sent and phone calls have been attempted.

But now I'm probably going to spend my entire week next week fielding calls and emails from irate parents, wanting to know why I failed their kid. My administrator will demand an explanation of why I let so many fail without giving them support, even though I've done practically everything short of doing the work for them. And behavior in my class will deteriorate even more. I am expecting this, because it is what has happened at the end of every other term thus far.

Marburger explained that it was her dream to be a teacher, but in just two short years, the job has beaten her down so much that she is ready to call it quits.

In the end, Marburger offered a little advice to parents:

People absolutely HAVE to stop coddling and enabling their children. It's a problem that's going to spread through our society like wildfire. It's not fair to society, and more importantly, is not fair to the children to teach them this is okay. It will not serve them towards a successful and happy life.

Many will say I shouldn't be posting such things on social media...that I should promote education and be positive. But I don't care anymore. Any passion for this work I once had has been wrung completely out of me. Maybe I can be the voice of reason. THIS HAS TO STOP.

Before it was deleted, Marburger's Facebook post was shared over 350,000 times, and garnered tons of support from fellow educators who sympathize with her position.

"This is exactly why my wife walked away from finishing her teaching degree. You'll have my respect if you take a stand and tell your administration that you aren't coming back tomorrow or ever again. Someone has to draw the line and start making the statement that spineless administrators are going to have to stop kissing entitled parents asses," wrote one person.

"I'm with you girl. You read my mind. I was in the exact same shoes yesterday. I left in tears too and most kids saw me. Many of them were sympathetic but some cheered and said they were happy i was leaving as I walked by crying. I, like you spend about 20 hours outside my contract time a week doing everything I can to be the best teacher possible and spend hundreds of dollars out of my own pocket every year to have the supplies I need to give these kids the best educational experience possible," posted another.

"I thought I could make it another 7 weeks," the posted continued. "But after yesterday I'm not sure. I'm taking today and tomorrow off to figure out my options. I'll keep you in my prayers. Please do the same for me!"

From Your Site Articles
Related Articles Around the Web
education
Get stories worth sharing delivered to your inbox
By signing up you agree to Upworthy's privacy policy.
Trending Stories
marijuana
Democracy

This handgun is an abomination, but the fact that people are defending it is even worse