Over two dozen scientists have proposed a wall on the U.S.-Mexico border that we should start building right now. 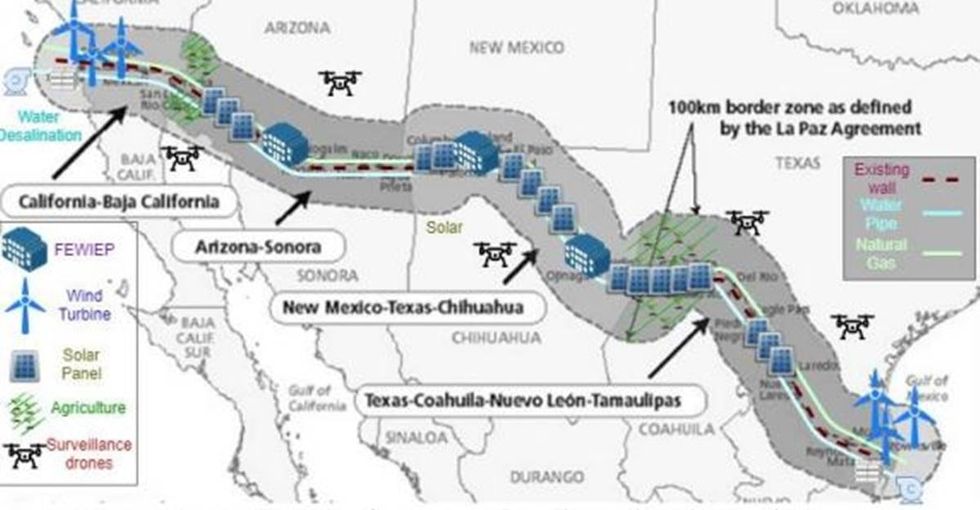 Donald Trump’s promise to build a wall across the U.S.-Mexico border is one of the most grandiose and unnecessary policies ever pursued in U.S. history for seven simple reasons:

1. The population of undocumented people living in the U.S. is at its lowest point in a decade.

4. Most unauthorized immigrants came here legally and overstay their visas.

5. Most drugs that enter the country don’t come across the southern border.

Facts be damned, Trump’s supporters are in love with the idea of walling ourselves off from our neighbor to the south.

So a consortium of 28 engineers from a dozen universities have come up with a genius idea that satisfies their fiendish desire for a wall while making a huge commitment to alternative energy.

The engineers devised a plan to create a 2,000-mile long industrial park on the border that would include desalination facilities, solar energy panels, wind turbines, and natural gas pipelines.

The park would require heavy security that can do double duty making sure that nobody crosses the border with a pocket full of weed.

According to a white paper released by the group, the border is an ideal location for generating alternative energy. “Given that most of the southern border lies in arid or semi-arid regions having high solar irradiation and wind, an energy park along the border is both feasible and desirable,” the paper reads.

The amount of solar energy production would be staggering.

The white paper estimates that a solar park along the entire border would produce the same amount of energy as the the hydropower production along the U.S.-Canada border and approximately the same amount that would be generated by a nuclear plant.

The eco-friendly wall would also create jobs and help foster cooperation between the two nations instead of division. It will also help bring together Americans of all political stripes for positive change.

“Democrats want a Green New Deal. Republicans want border security,” Luciano Castillo, a professor of energy and power at Purdue University who leads the group, told Scientific American. “Both parties could win. It could be a win–win for the U.S. and Mexico, too. This idea could spark a completely new conversation about the border. And we need that.”

The team has presented the plan to three U.S. representatives and one senator.

A viral video from a Little League game has people celebrating good sportsmanship.

Youth sports have gotten more intensely competitive, to the point where overeager parents and coaches have to regularly be reminded to take it down a notch. So when humanity takes precedence over team rivalries, it's extra heartwarming.

And considering how many "kids these days" laments we see coming from older generations, it's also heartening to see kids showing excellent character qualities when no one directly asked them to.

A viral video from a Little League baseball game is giving us a nice dose of both—good sportsmanship and basic human kindness from two players from opposing teams.

"I told him whatever it was, whatever was going on in his life, it was going to be OK."

Suicide is an emotionally fraught and complex topic to discuss. But one overlooked part of the issue that provides some hope is that even though suicidal crises are predominantly caused by chronic issues, they are usually short-lived.

An article in the journal Crisis, cited in a Harvard T.H. Chan School of Public Health news piece, states that the acute period of heightened risk for suicidal behavior is often only hours or minutes long. Around 87% of people deliberated for less than a day. Another article in the Journal of Clinical Psychiatry found that of people taken to the hospital after a suicide attempt, 48% considered the idea for fewer than 10 minutes.

What is vasculitis? Ashton Kutcher shed some light on the rare disease after his diagnosis.