Outraged responses to Mark Kirk's racist jab at Tammy Duckworth are pouring in. 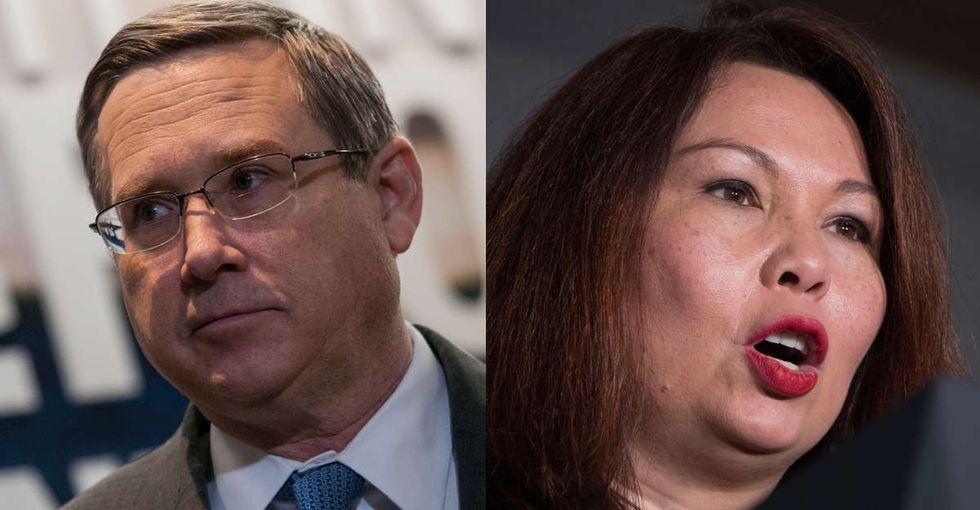 Duckworth, who was born in Thailand and lost both legs while serving in Iraq, was touting her qualifications in evaluating the need for future military action, citing her family's long history of service:

"My family has served this nation in uniform going back to the Revolution. I'm a daughter of the American Revolution. I've bled for this nation. But I still want to be there in the Senate when the drums of war sound because people are quick to sound the drums of war. And I want to be there to say, 'This is what it costs, this is what you're asking us to do, and if that's the case, I'll go.' Families like mine are the ones that bleed first. But let's make sure the American people understand what we are engaging in, and let's hold our allies accountable because we can't do it all."

To which Kirk responded:

"I had forgotten that your parents came all the way from Thailand to serve George Washington."

After the debate, Duckworth responded on Twitter with a family photo:

My mom is an immigrant and my dad and his family have served this nation in uniform since the Revolution #ILSEN https://t.co/ehEBHswFMs
— Tammy Duckworth (@Tammy Duckworth)1477619273.0

The rest of Twitter was ... not so gentle to Kirk.

I can see why @SenatorKirk got confused. After all "Duckworth" is an old and distinguished Thai family name.
— Lance Mannion (@Lance Mannion)1477660168.0

The comments elicited strong reactions from voters, many of whom were outraged and upset.

Senator Mark Kirk's derogatory comment to Tammy Duckworth makes me cry. I can't believe I live in a country where grown ups talk like that.
— Katie Benston (@Katie Benston)1477660969.0

Others noted the irony of Kirk having previously been caught of inflating his own military record, including making a false claim that he served in the Gulf War.

Some vowed to take their outrage with them the ballot box.

"Looking white" isn't a prerequisite for having a long, distinguished family history of military service.

Neither is being born in the United States. (Lots of foreigners — Frenchmen, Germans, and Poles in particular — served in the Revolutionary War, FWIW.)

Asian-American soldiers have fought in every major American war since the Civil War, and their representation in uniform is increasing.

Disagreeing over the proper role of the military shouldn't mean disagreeing on who looks like they have the right to join the conversation.

Kirk issued a statement shortly after the debate, affirming his respect for Duckworth's family's service but refusing to walk back his comments.

He tweeted an apology the next day:

The debate about how America should deploy its men and women in uniform is complex and critically important. That debate is not just for white people and hasn't been for decades. One's share of whiteness doesn't track with the amount one is allowed to contribute.

Duckworth with another multiracial American you might have heard of. Photo by Jim Watson/Getty Images.