Milwaukee staged a 'Day Without Latinos.' Here's what that looked like.

Calling for an end to deportation raids, Wisconsinites gathered for a 'Day Without Latinos.' 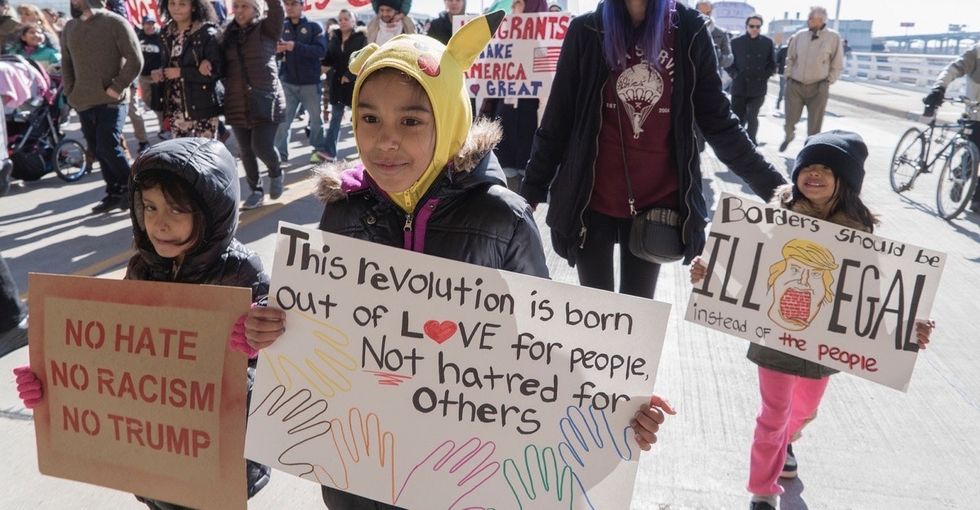 When Immigration and Customs Enforcement (ICE) agents detained and deported Guadalupe Garcia de Rayos in early February, it became clear that President Trump was taking a no-holds-barred approach to immigration.

On Monday, Feb. 13, thousands of Latinos, immigrants, and allies flooded the streets of Milwaukee, Wisconsin, in protest of Trump and Clarke.

Calling it a "Day Without Latinxs, Immigrants, and Refugees," civil and workers' rights group Voces de la Frontera organized a single-day strike. Immigrants, refugees, and Latino workers from around the state took the day off work and gathered for a march on the Milwaukee County Courthouse.

The goal of the strike is to use collective economic power — making their absence from the workforce felt — in a statement about how integral immigrants are to the fabric of America.

"We arrived here from more than 25 cities in Wisconsin to show Trump and his lapdog Sheriff Clarke that the people of Milwaukee, the people of Wisconsin, and this whole country reject the 287g program, which is part of this mass deportation plan," said Christine Neumann-Ortiz, Executive Director of Voces de la Frontera in a statement.

"Today, we organized a Day Without Latinxs, Immigrants, and Refugees to use our economic power — through work stoppages, small business closures and our consumer boycotts, to defend our families and communities."

There are more than 11 million undocumented immigrants in the U.S., and they actually help the economy, rather than hurt it.

A 2016 analysis by the Institute on Taxation and Economic Policy (ITEP) found that undocumented immigrants contribute roughly $11.6 billion a year in taxes.

During his campaign, President Trump tried to create the impression that undocumented immigrants are a drain on the country's resources. That's simply not an accurate portrayal of their contribution to America's economy.

Undocumented immigrants pay into systems, such as Social Security, though they'll never collect on it.

The reality is that a number of studies have found that undocumented immigrants are actually less prone to crime than citizens.

Ripping people away from their families and sending them back to countries where they haven't lived in years — decades even — isn't going to make America great.

Whether they're citizens or not, the people who live here, who work here, who love here — they're Americans. And that's what the strike and the #DayWithoutLatinos was all about. From an economic point of view, it's better to have a "Day Without Latinos" than a country without Latinos. They're a part of the American story, no matter how they came here or whether they have the right kind of identification. We need to stand up in support of our fellow Americans.

People are making their voices heard. On Feb. 13, it was in Milwaukee. Wherever it's needed next, let's commit to standing on the right side of history.

You can learn more about Voces de la Frontera's work at its website.