L.A. cares about its workers, raises the minimum wage to $15. It's the largest city to do it so far.

Joining Seattle and San Francisco, Los Angeles is the latest city to adopt a $15 minimum wage. 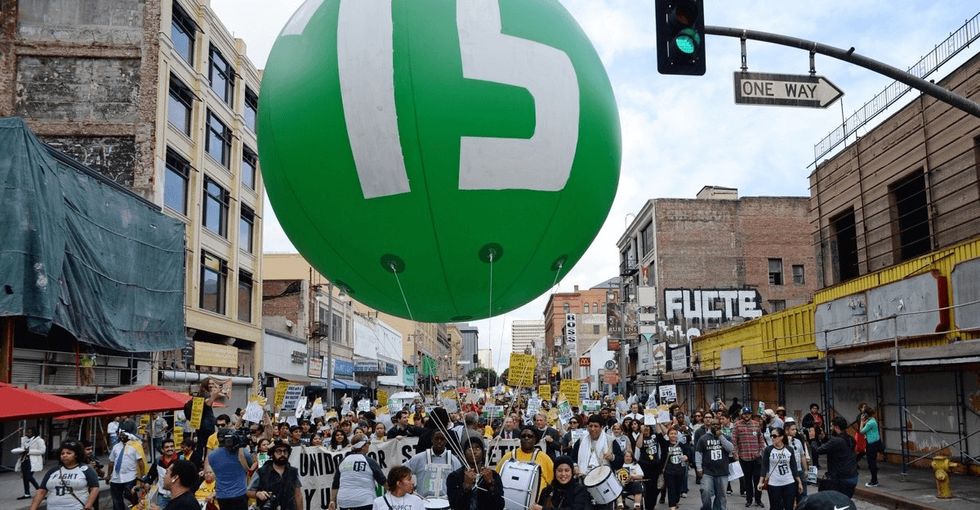 The Los Angeles City Council just passed bill that will raise the minimum wage to $15 an hour by the year 2020.

The council voted 14-1 in favor of raising the minimum wage. Los Angeles will become the largest city in the country with a $15 minimum wage, along with Seattle and San Francisco.

California's state minimum wage currently sits at $9 an hour and is set to increase to $10 an hour in January.

Protesters, workers, and activists have pushed for a $15 minimum wage in both Los Angeles and the rest of the country.

Last December, the city was home to a massive protest led by health care workers and fast-food employees, along with supporters. Last month, groups around the country came together to make the same demand on a much larger scale.

In recent years, a number of cities have taken steps to raise the local minimum wage

There are a lot of falsehoods going around about supposed negative effects a $15 minimum wage would have on the country, but they're nothing more than myths.

The Department of Labor has an excellent breakdown of some of the more common arguments against raising the minimum wage along with some great statistics to support an increase.

With other cities on the verge of taking action on their minimum wage rules, it's clear that the recent Fight for $15 protests are making a difference. Here's hoping this trend continues.

At some point, every pet owner has wondered what their animals were thinking. If you’ve ever stared into a dog or cat’s eyes, you’ve certainly seen a spectrum of emotions and thoughts reflected back to you: love, anger, trust, curiosity, playfulness and so on. Skeptics say attached animal owners are simply projecting human traits onto creatures that still exist purely on a primal level, free of the consciousness that supposedly makes human beings unique.

But a new law in Spain challenges that assumption with real weight behind it, labeling all animals, including wild ones, as sentient beings.

According to El Pais: “From now on, animals will be treated as “sentient beings,” and as such will have a different legal standing than an inanimate object. They will no longer be able to be seized, abandoned, mistreated or separated from one of their owners in the case of a divorce or separation, without having their wellbeing and protection taken into account.”

One dad who decided to go clubbing with his daughter is making our day while having the night out of his life.

Talia Schulhof (aka @taliasc) had to know she had all the makings of a viral-worthy TikTok when she posted:

“My dad wanted to go to a club so here’s how it went.”

If she didn’t know before, the now 10 million views are a sure indicator. People are loving this adorably wholesome video.