We asked 15 people why they're fighting for $15 and this is what they said.

Why do you think we need to raise the minimum wage? 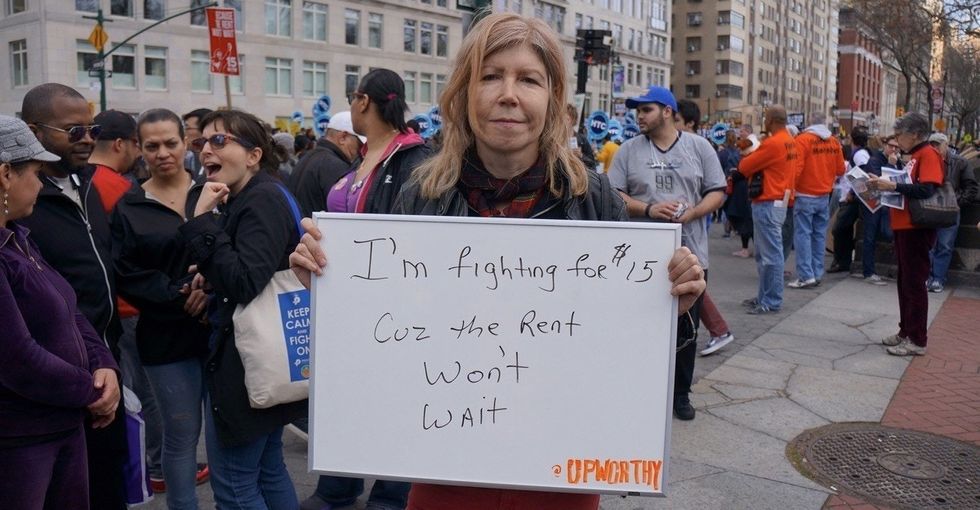 Around the country, people are marching to raise wages.

The federal minimum wage is just $7.25. Protesters are pushing to more than double it to $15 an hour.

A popular misconception is that minimum-wage employees are just college kids looking for extra spending money. But 89% of people who would benefit from an increased minimum wage are age 20 or older.

Upworthy asked people at the 2015 New York #FightFor15 protest why it's so important to them that we raise the minimum wage. Their responses remain true today.

Like this man, many others believe that people who work full-time shouldn't still end up in poverty.

It reads: "I'm fighting for $15 and a union because no one should work full-time and still live in poverty."

Another common concern was the rising cost of living. This woman puts it clearly:

Others, like this woman, want to help make the world a better place for future generations.

It reads: "My son just graduated from college. He and all the sons and daughters need a living wage. I hope this movement jump starts a new, vital labor movement."

And to this woman, it's about respect.

It reads: "I'm fighting for $15 to raise America and the economy. I believe we can win for us all. Workers just want to be respected. #FightFor15 #RaiseAmerica"

It reads: "We're home health aide workers and we're fighting for $15 because life is expensive."

And like this man says, paying a living wage is the humane thing to do.

This home care worker knows how rough it can be trying to support your family on low wages.

It says: "I'm a home care worker. I'm here to fight for a better salary because life is difficult at $10 an hour. I cannot pay all my expenses. I'm a single mom, and it's hard every single day. I think it's very good to be a union member cause I feel support in my life. Thanks."

A plumber chimed in, echoing the comments about supporting a family.

It reads: "I'm a union plumber. I'm here supporting workers for a fair wage of at least $15 per hour. We all have families to support."

And this group from Belgium doesn't think $15 is so much to ask.

It reads: "I'm from Belgium, and the American people deserve $15!"

For many, however, it's as simple as wanting to be able to take care of your family.

It's no surprise that workers everywhere are asking for a living wage. When you adjust for productivity, the minimum wage has actually decreased by 23% since 1968.

But these protests can't really change anything, right? Wrong.

If it weren't for these efforts in cities like Seattle and San Francisco, it's likely that things would have stayed how they always were. Both cities have recently boosted their minimum wages to $15 an hour — and on April 4, 2016, the governors of California and New York followed suit by raising their states' minimum wages to $15. Because people got out there and made their voices heard, two of the most populous states now sport two of the best worker wages in the country!

Who's to say we can't make this happen nationwide?