Joe Biden’s heartwarming eulogy of John McCain shows us politics at its best. 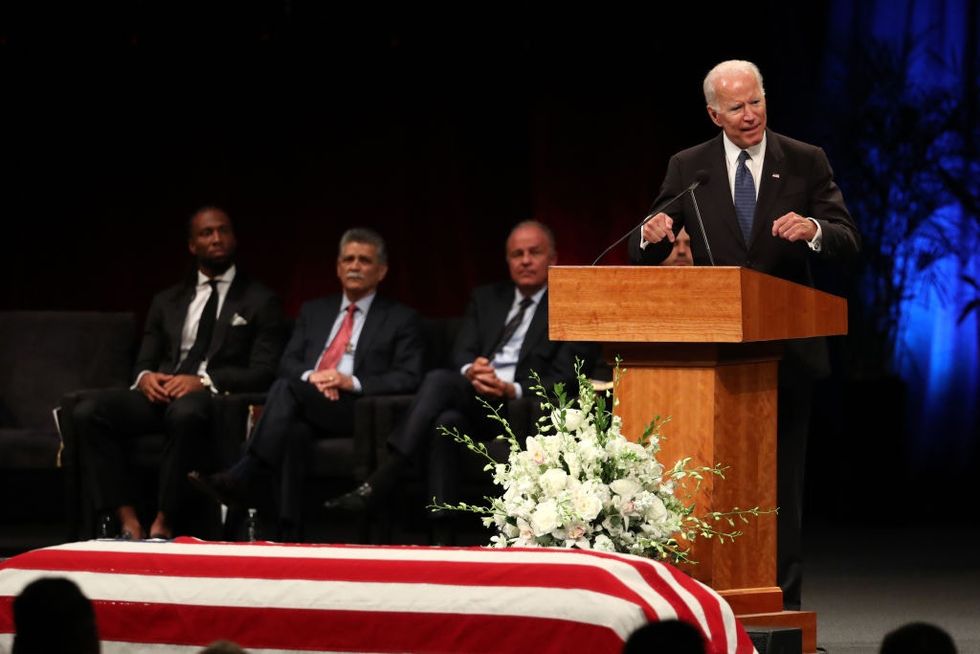 “My name’s Joe Biden. I’m a Democrat and I love John McCain.”

Today, the family of Sen. John McCain (R-AZ) held services in his honor in his home state of Arizona. It was part of a four day series of events that will reach its zenith on Saturday when former Presidents Barack Obama and George W. Bush eulogize the “maverick” who both challenged them in presidential elections.

But on Thursday, it was time for former Vice President (and senator) Joe Biden to honor the man he called his “brother” along with 20 other U.S. senators, family and friends in attendance.

You can watch the full service here.

“I pray you take some comfort knowing that because you shared John with all of us your whole life, the world now shares with you the ache of John’s death,” Biden said to McCain’s family.

Biden has known more than his own share of tragedy, surviving a deadly car crash before coming to the U.S. Senate and more recently losing his son Beau to cancer.

But his eulogy to McCain was focused less on tragedy and more on what makes America so special. And it was something he said was at the very heart of who McCain was as a person.

I was thinking this week about why John’s death hit the country so hard,” Biden said. “I think it’s because they knew that John believed so deeply and so passionately in the soul of America.”

Families fight. It’s normal. But for strong families it always comes back to love and respect. McCain and Biden were like family.

"I always thought of John as a brother," Biden said. "We had a hell of a lot of family fights. We go back a long way."

Critics of McCain say he had a bad temper, something he fully admitted himself. But for Biden, the ways they came together for the country and the world greatly outweighed their personal and political differences.

“All politics is personal. It's all about trust. I trusted John with my life and I would and I think he would trust me with his,” Biden said.

Biden’s message to the country: things have changed. That doesn’t mean they can’t get better.

“The last day John was on the Senate floor, what was he fighting to do?” Biden said, talking about McCain’s instantly famous decision to give a “thumbs down” to President Trump and the Republican Party’s attempt to repeal Obamacare.

“He was fighting to restore what you call ‘regular order,’” Biden said. “Just have to treat one another again, like we used to.”

“We both loved the Senate, proudest years of my life were being a United States senator,” he said. “We both lamented, watching it change.”

“John’s story is the American story, grounded in respect and decency, basic fairness, the intolerance in the abuse of power,” Biden added.

“To paraphrase Shakespeare, we shall not see his like again.”