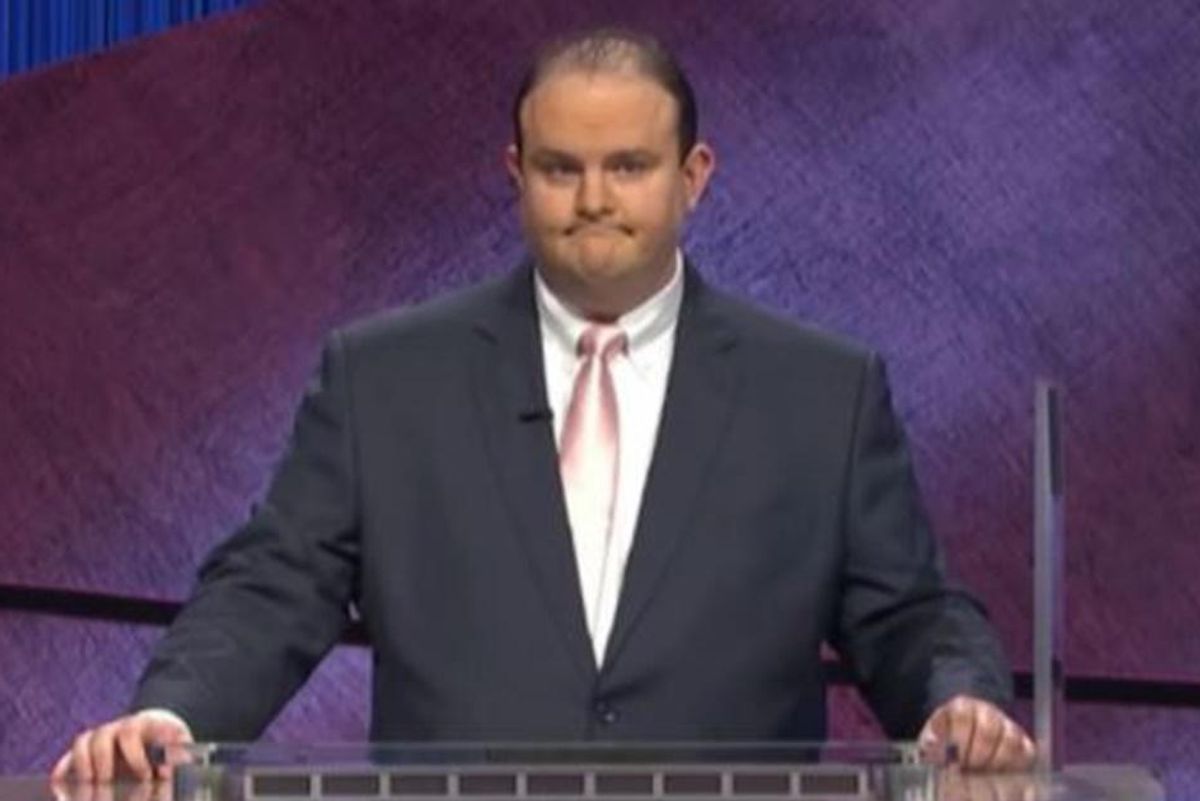 Kelly Donohue ended a three-game "Jeopardy!" winning streak Tuesday night, leaving him with an impressive $80,601 in cash. But his performances have set off a social media firestorm because of two instances that some claimed were racist signals.


The situation inspired an open letter addressing the issue signed by over 500 former "Jeopardy!" contestants.

Throughout Donoahue's brief run on the show, he signaled the number of games he won through hand gestures. After his first win last Friday, he held up one finger and after his Monday victory, he held up two. That was all fine and good. But it was after his third victory that things got complicated.

On Tuesday, he held up three fingers and it caused a lot of discussion on social media.

The three-finger symbol he made resembles the "okay" sign, a gesture that was officially designated as a hate symbol by the Anti-Defamation League in 2019. The gesture is similar to one used by the white supremacist group the Three Percenters and the Proud Boys.


But it's also how a lot of people make a number three with their hands.

The group of former contestants didn't see it as a clear-cut symbol for the number three. "He held his thumb and forefinger together with his other three fingers extended and palm facing inward, and he tapped his chest," the open letter says.

"This, whether intentional or not, resembled very closely a gesture that has been coopted by white power groups, alt right groups, and an anti-government group that calls itself the Three Percenters," the letter continued.

Donohue also courted controversy during his Monday performance by using the term "Gypsy" to refer to Roma people. "The use of this term doesn't necessarily indicate malice; until recently, it was widely used by English speakers," the letter reads. "Current diversity style guides, however, suggest that it not be used, and that Roma or Romani be used instead. Host Anderson Cooper noted this on-air."


The group of former contestants couldn't believe that both incidents made it on air because, in the past, "Jeopardy!" producers have edited or reshot moments from the show that could cause controversy.

Donohue's first response to allegations that this three symbol was a hate gesture was pretty clear.

"That's a 3. No more. No less," he wrote on Facebook. But his statement wasn't enough for the former contestants who urged him to provide an "an apology and a total disavowal of any connection to white supremacist doctrines is called for."

I'm truly horrified with what has been posted about me on social media. I absolutely, unequivocally condemn white supremacy and racism of any kind. People who know me personally know that I am not a racist, but for the public at large it bears repeating: I am not a racist and I reject and condemn white supremacy and all forms of bigotry for the evil they are.

I'm truly horrified with what has been posted about me on social media. I absolutely, unequivocally condemn white supremacy and racism of any kind. People who know me personally know that I am not a racist, but for the public at large it bears repeating: I am not a racist and I reject and condemn white supremacy and all forms of bigotry for the evil they are. It's shameful to me to think anyone would try to use the stage of Jeopardy! to advance or promote such a disgusting agenda. During the taping of my fourth episode, I was simply raising three fingers to mark my 3rd win. There was nothing more I was trying to indicate.

I deeply regret this terrible misunderstanding. I never meant to hurt a soul and I assure you I am no friend of racists or white supremacists.

I removed the previous post because the comments were more than I could bear. I stand by the statement itself and you can find it reported in other media. I did, however, understand the fair criticism that I did not include a forceful condemnation of white supremacy in my initial statement. I hope my feelings on that matter are clear now.

Donohue's story shows that there is so much tension around race in America that it's pretty easy for someone to accidentally find themselves in hot water. Most people probably aren't that well-versed in white supremacist hand gestures or slurs for Romani people, so it's pretty easy to assume that Donohue walked into the situation unknowingly.

While the former "Jeopardy!" contestants saw Donohue's performance as an opportunity to demand an apology from him, that may not have been the best way to handle things. In a situation where things are pretty nebulous, why not take the opportunity to educate the general public on racist slurs and hand gestures instead of making it personal? Their false accusation could have unfairly destroyed Donohue's life and the unjust impact their letter will have on him is still yet to be determined. Wouldn't it be nice if they responded to his thoughtful statement with a diplomatic statement of their own and show all of us how to have a meaningful dialogue?