It's how one woman coped with depression, and now it's a global movement of love. 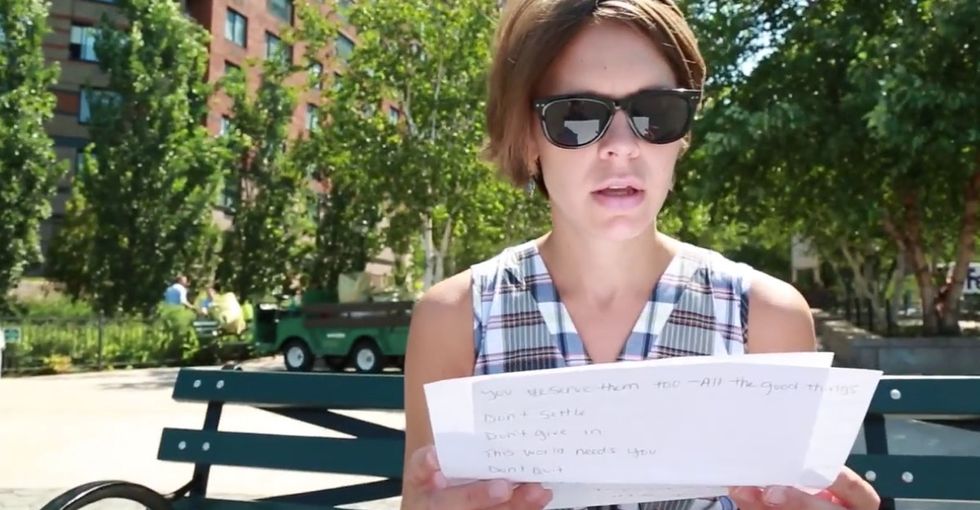 After moving to New York, Hannah found herself battling depression. While there are many ways to cope with depression, Hannah's approach was both novel and obvious: She started writing, but not in a blog. Instead, she penned individual letters to strangers in the city.

"It's been nearly five years. Nearly five years since a letter, just like this one, turned my world upside down. I moved to New York City right after college. I did not expect something like depression would meet me in those city streets. That's the thing about depression though. You don't get to tell it when it comes and goes. It's an illness. That depression came to meet me and to try to cope, I started writing letters to strangers in this city. I started leaving them across Manhattan. I filled them with stories, questions, hopes, all the words I could not give myself at the age of 22."

But what began as a coping mechanism for Hannah has blossomed into a powerful campaign, reaching people across New York.

Her letters were no longer just about her story. People receiving them felt connected and inspired to reach out to others. Their voices joined hers in a chorus of acceptance and love. Anonymous bonds were built. There's something comforting about knowing that a complete stranger cares enough about humanity to reach out to other unknowns.

"Those letters spiraled into something so much larger than me, so much bigger than a girl who was writing and leaving letters for strangers, just because her mother had once done the same for her. That is always the most beautiful part of the story though. When the story stops being all about you and it has the chance to become the story that belongs to so many others. I spent a year writing letters to anyone who emailed me."

Hannah blogged about her letter-writing experience, asking a simple question: "Do you need someone to write you a love letter today?"

The responses that question generated transformed Hannah's anonymous letter-writing project — meant as a means to cope with her own depression — into the thriving, global community that is More Love Letters.

More Love Letters is where people can contribute to bundles of letters sent out to those in need of encouragement and hope.

"Those hundreds of first letters laid the foundation for what is now a community of thousands of ordinary people writing to someone who needs encouragement. It's called More Love Letters. It's a place on the internet where you can read the stories of strangers and write to them. Your letter will be one in hundred to show up at their door at a time when they need a push, a nudge, a reminder to just keep going. Maybe that is you."

Living with depression can be really hard. Depression lies. Depression harms. Depression kills. Sometimes it's really helpful to just hear some small words of encouragement to keep you going through it all, even when things get really bad. Hannah's project is one small, crucial way of giving that.

"Maybe you need the reminder today. Keep fighting. You deserve good things for your life. It sounds too simple, but it is amazing the number of people who believe that for other people, but not themselves. You deserve them too. All the good things. Don't settle. Don't give in. This world needs you. Don't quit."