How growing up surrounded by my black girlfriends changed me. 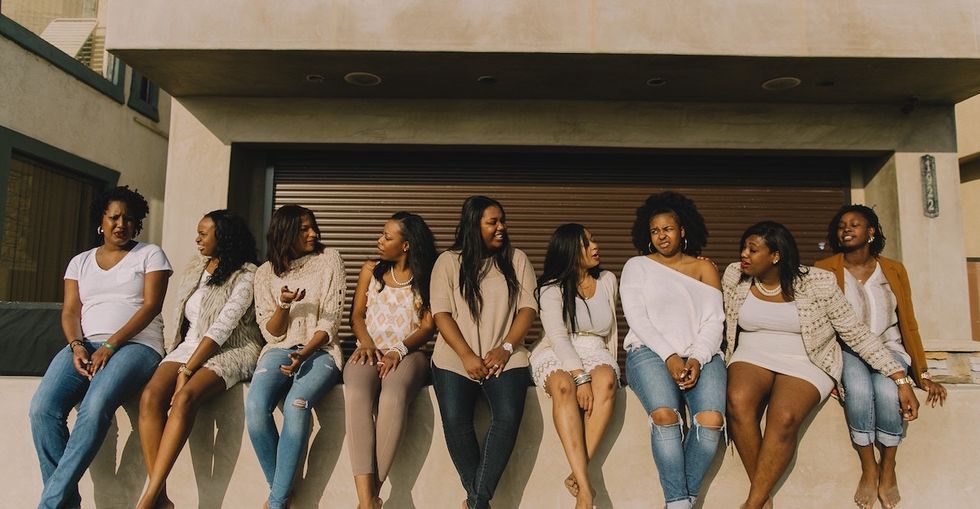 “When are we gonna start the discussions?” Nichelle asks impatiently as the rest of us stuff our faces with chocolate-filled crescent rolls and blue Sour Patch kids.

All bras are off for the night, and all hair is securely fastened in bonnets. Everyone is talking at once, and even though our bedtime isn’t until the sun begins to rise, each of us has already claimed her sleeping territory.

We are at a sleepover. We are grown-ass women.

Looking back, I never minded being the token black kid at an elementary school filled with mostly white and Chinese students.

At times, I think I even preferred it — it was just one more thing that made me feel special. This isn’t to say that I was exempt from typical 9-year-old token black girl frustrations (like not being able to wet my hair at slumber parties and feeling uncomfortable when my peers would ask me if I was related to MLK), but overall, I was fine. I thrived both socially and academically.

In 1996 or 1997, I started dancing on a praise team at a small black Pentecostal church, and I made a new group of friends.

This began sleepovers every summer and winter with the other dancers in the group, a tradition that we continue to this day. During the early years of our sleepover tradition, since we saw each other four or five times during any given week, our sleepovers always felt like a capstone of sorts, celebrating another successful few months of being friends, of dancing, of going to middle school, to high school, to college.

All photos by Kenzie Kate Photography, used with permission.

These days, we’re lucky if we even see each other every other month. Our sleepovers have shifted into something equally fun but more intentional, weighted with a more tangible significance: a time to celebrate weddings, babies, and career moves. A time to cry about failures, losses, and relationship mishaps.

"Discussions" are inevitable these days, too — lengthy and usually heated conversations about everything from relationships and dating to politics and corporate America. These discussions have become a highlight of our adult sleepovers, second only to quoting "Mean Girls" in its entirety.

All of this is to say: Having black friends is important, y’all.

This may seem like a given, but it’s something I didn’t realize until fairly recently during our last sleepover, when we were time-traveling and laughing about stories from our almost two decades of knowing each other.

Growing up with a solid group of black women as friends has empowered me in ways that I am still discovering. Here are a few.

I am afraid of being a stereotype. In non-black circles, I overcompensate often: I speak of my love of country music and swimming, I enunciate well and emphasize my i-n-g’s. I limit saying anything that could be interpreted as me using the (non-existent) race card. I fear being labeled an angry black woman.

But at our sleepovers, the subject matter is always candid and nothing is off limits. We make our disapproval for someone’s significant other known, we debate the perks and downfalls of going to a historically black college, we talk about black men dating white women, we talk about why we should move to Atlanta, we talk about why we should not move to Atlanta. We don’t have sidebar conversations. If two people are arguing, we are all there. If someone is crying, we are all there. And we know that no amount of yelling or arguing or ranting or tears could ever make anyone else in the room doubt our intelligence. We know that we are all smart.

2. It is important to have a space where you don’t feel like you are speaking for the entire African-American population.

On many past occasions, as a result of being the sole black perspective, I have failed black people. When given the mic, I have been quick to say the easiest thing, to make the people around me comfortable, to manipulate the truth, to not be the downer in the room. When I’m with my girls, I am only required to speak for myself. My opinion only belongs to me. There’s so much freedom that comes with that.

3. It is important to have a space where you don’t ever feel like you’re talking about race "too much." It is also important to be in a place where wearing a scarf to sleep is the norm and ain’t nobody wettin’ their hair.

On the playground, I remember the envy I felt watching all the little white girls put their hair up in ponytails to play soccer and then taking the ponytails back down and splashing some water in their hair to go back to class. It was magic. My hair had to stay in its four ponytails, hair balls hanging on ends, lest I receive a beating when I got home. My hair was not magic.

But on Saturdays, as we’d prepare to dance at church on Sunday morning, my mom ran a pressing comb through all of our heads, gelling down our kitchens, changing afro puffs into curly ponytails and loose edges into defined twists. Our hair was magic.

Even still, as adults, we revel in each other’s hairstyles: the bobs, the braids, the afros, the twists, the locks, the ongoing discovery of how our hair can shape shift into something else. Our hair is magic.

Growing up with black girlfriends meant growing up surrounded by mirrors: reflections that looked just like me and constantly showed me who I was and who I could be. They were mirrors that knew me for me and constantly reminded me that I was magic.

We don’t see each other four times a week like we used to, and our phone calls and text messages are sometimes far and few between, but we hold on tightly to our bi-annual sleepovers, because we know that we need each other to survive in this world.

Black women need each other in this world.