Her life was on the line, and she did the one thing that could save her: She ordered pizza. 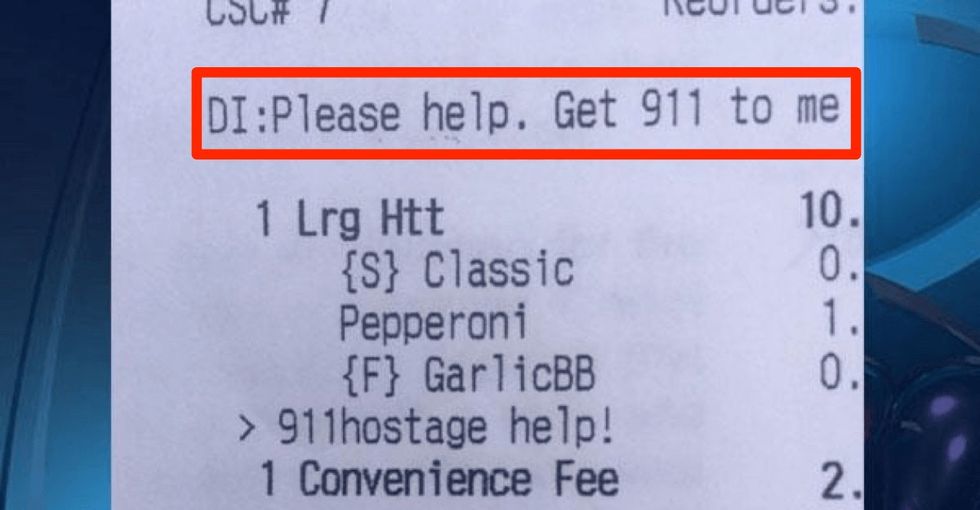 On average, nearly 20 people per minute are physically assaulted by an intimate partner.

Domestic violence affects an estimated4 million womeneach year. According to the National Coalition Against Domestic Violence, 1 in 3 women (and 1 in 4 men) have been the victim of physical violence at the hands of a current or former intimate partner.

While it might seem as simple as just leaving for those of us who aren't stuck in those kinds of relationships, it's nowhere near that easy for many abuse survivors.

This is why it's so important for 911 operators, police officers, and all of us, really, to be able to read between the lines in these types of situations.

One incredible story of a woman using 911 to help escape an abusive relationship happened in 2015.

Cheryl Treadway of Highlands County, Florida, escaped a hostage situation with the help of her cell phone and a local Pizza Hut.

Treadway and her children were being held at knifepoint by her boyfriend Ethan Nickerson. So she placed an order on her phone's Pizza Hut app — a small hand-tossed pizza with pepperoni. Oh yeah, it also came with a note telling store owners that she was being held hostage and asking them to please send help.

Upon receiving her order, the local Pizza Hut called the police, who arrived at her home and arrested the boyfriend.

Treadway's story brings to mind a chilling anti-domestic violence PSA that ran a few years back during the Super Bowl.

The PSA features a woman on the phone with police, but acting as though she's ordering a pizza.

And, while No More — the organization behind that Super Bowl PSA — isn't exactly everything it claims to be, the message in the PSA is no less valid.

The scenario in the PSA played out in real life and was shared on reddit by the 911 operator.

The National Domestic Violence Hotline has many resources for people stuck in an abusive relationship, including a safety planning tool.

The safety planning tool is really helpful for abuse survivors looking for a way out, and it includes details on the different types of plans, tips on how to leave an abusive relationship, and a guideline to some basic legal info.

What if the Pizza Hut manager didn't think to call 911 in Treadway's situation? What if the operator in the PSA didn't catch on to the caller's message? Luckily, they did. Still, it's important to know that not every warning sign will light up like a road flare. Sometimes, people are asking for help and we just might not be listening.

Thankfully, some out there are listening. And in doing so, they're saving lives.

The article was originally published in 2015, it has been updated.