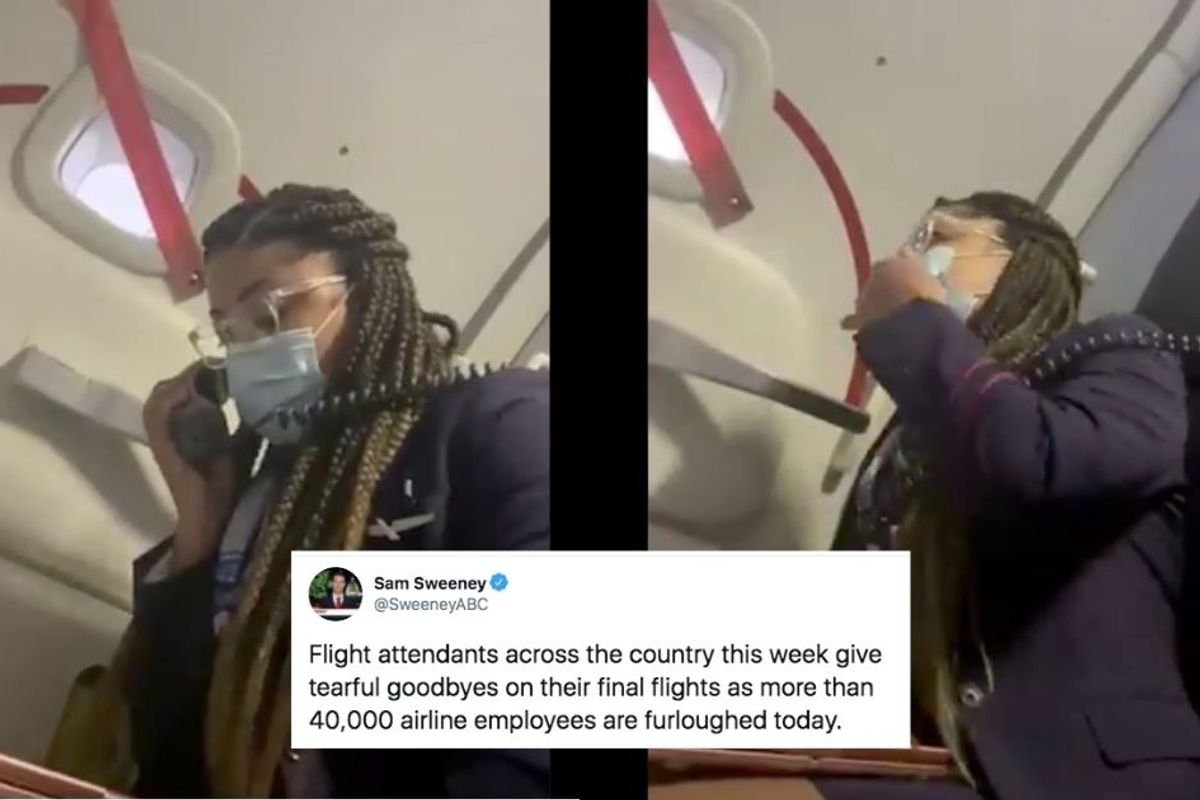 The human cost of the coronavirus pandemic can be measured in many ways. Illness and death top the list, of course, but the mental, emotional, and economic toll must be acknowledged as well. Though the woefully inconsistent and inadequate U.S. response has led to far more suffering than necessary, and although better control of the pandemic would have saved us from a lot of it, some struggles were inevitable.

One industry that was going to be hit hard one way or the other is the airline industry. With people being advised to stay home and avoid close proximity with others, especially in enclosed spaces, airplane travel has been out. And seven months in, the ongoing hit has become unsustainable. As of October 1, 40,000 airline employees have been furloughed.

One flight attendant's heartfelt farewell as she crewed her final flight has been shared by ABC's Sam Sweeney, and phew, it's a doozy. She holds back tears as she explains how American Airlines has been forced to reduce flights, which has resulted in job cuts and how much she has loved working as a flight attendant.

After thanking the passengers and the airline for the opportunity to "see this big world" and to make lifelong friendships—having to take a few breaks to compose herself as she was speaking—she called on everyone to practice kindness and compassion toward one another. It's a heart-wrenching clip that puts a human face on the economic toll the pandemic has taken.

Some efforts have been made to avoid such job losses. Oregon Representative Peter DeFazio attempted to pass a bill in the House to save those jobs—an extension of the Payroll Relief Program from the CARES Act—but it was blocked by the GOP. DeFazio gave an impassioned speech decrying the block.

DeFazio's time ran out and his request for another minute was denied.

"Well I'm sorry, I'm not gonna stop talking. I'm tired of bureaucracy around here—it's time to do real things for the American people!" he shouted. "And this is real. These people's lives are at stake."

The pandemic has been tough on all of us, but when jobs and businesses are hit by forces beyond their control and Americans are losing their livelihoods by the millions, it's time for the government to stop the bleeding any way it can. And when partisan bickering gets in the way of helping the American people, it's time to make our voices heard at the ballot box.