First we had windmills. Then wind turbines. Now it's time to meet the Windwheel.

Those delightfully zany Dutch have done it again! 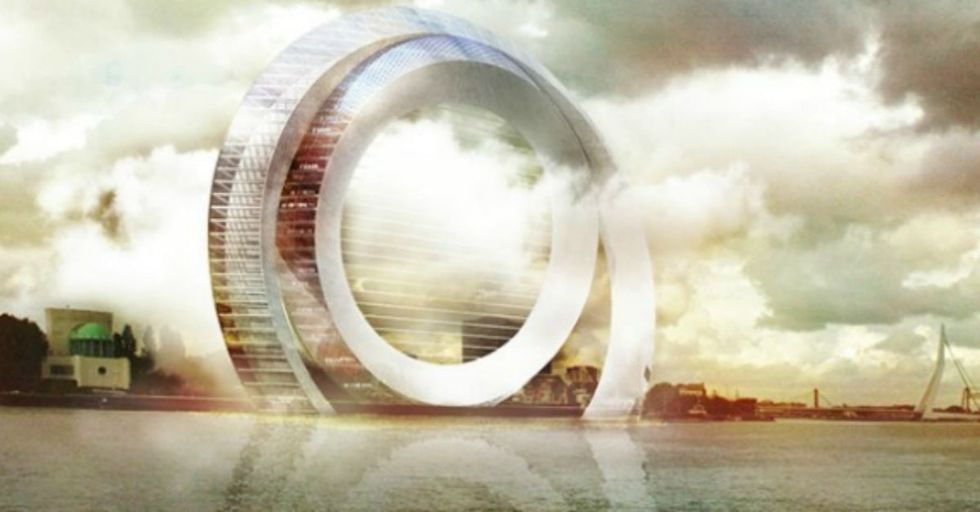 You're waking up in your beautiful new apartment, looking out on the canal it's situated upon. You sit at your kitchen counter with a cup of coffee, grab the stack of envelopes waiting to be opened, and peruse the invoices within to be paid. But one is missing.

It's the electricity bill.

You frantically search through your mail — and then you remember. You don't have an electricity bill. Because your new apartment is part of a giant circular "Windwheel" that not only generates enough power for your complex, but enough to power your whole town.

Waking up in this building would be such a trip! Image from Dutch Windwheel.

Does a giant Windwheel you can live in sound like a fantasy? Well, it's actually closer than you think.

It's a plan that's so zany it just might work, and its itty-bitty prototype is expected to be easily scalable to the sizes required for the head trip we just went on to become a reality. And it could be ready to operate and live in within 10 years.

How does this Windwheel thing work?

Here's a glimpse of the concept from the Dutch Windwheel company and the Delft University of Technology. Mary Beth Griggs explains in Popular Science:

"Horizontal beams will stretch across the center of the Windwheel. Thousands of nozzles located along them will spray positively charged water molecules into the air. When wind pushes the droplets against the beams' high-voltage electric field, it will create a negative charge.

Or here's another way of looking at that.

We know we can harness energy through mechanical conversion via windmills and wind turbines, like so:

But these Delft University of Technology geniuses wondered if they could get the energy without the mechanical part. (Short story — they can.)

"We wondered whether it is possible to produce energy from wind without the conversion via mechanical energy. It is! By letting the wind move charged particles against the direction of an electric field. How does that work? This is an electric field and a positively charged particle. This can be any object that can hold charge. For example, a ping pong ball. But for the EWICON, we use water droplets. The electric force of the field moves the particle toward the negative electrode. Now when we let the wind push the particle toward the positive electrode, the potential energy of the particle is increased — similar to pushing a rock up a mountain against gravity."

They're already using this technology on a much smaller scale and looking to improve its efficiency. Researchers think that with funding and more work on the design, it can be ready to go, in an affordable way, in a decade. And they're betting that making it a design that actually provides housing — yes, actually being able to live in one of the magical Windwheels — is a win-win economically.

Imagine going night-night in this place. Image from Dutch Windwheel.

It's also proposed, as shown in this diagram, that the Windwheel could have solar panels to enhance its energy production capacity.

It's not clear if this technology could eventually be retrofitted to benefit existing apartment buildings, and we're a bit too far from the actuality to start putting in a rental application for the first Windwheel apartment just yet, but...

2025 is the projected year that the Windwheel could be up and running.

And for people who are looking forward to seeing their electric bills go down (not to mention switching to cleaner energy), it won't be a moment too soon.