Fatphobia is real. Here's how it affected one woman. 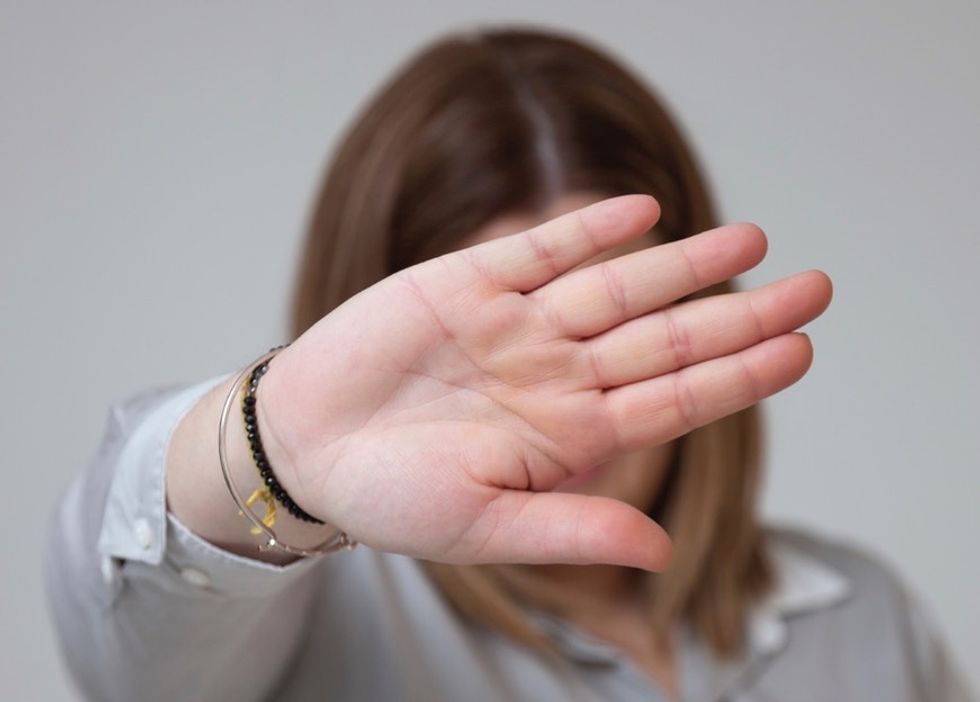 Last August, I did a family photo shoot with a professional photographer at our beach house in Connecticut.

The beach — one of those quiet, private spots where you can actually hear yourself think — was on the Long Island Sound, and the water was calm. My nephews ran around like maniacs the entire time, laughing and having fun. By all accounts, it should have been the perfect late-summer evening with my fantastic family.

But all I could think about was how fat I felt.

I was wearing a white, chiffon dress from Forever21 (let's just ignore the fact that I was 28 at the time) and a bra that was about a half cup too small. My arms felt ungainly, and my underwear was acting like a hellish pair of Spanx — way too tight and cutting into my stomach. I felt constricted and messy and just not pretty.

I had gained 20 pounds over the previous year due to depression, anxiety, and a medication.

I felt out of control in my body despite the fact that, by all appearances, I actually wasn't fat. I wasn't even really that overweight. I was 20 pounds up from a weight I had designated “good enough" back when I was a junior in college. And that weight was even another 15 pounds up from my absolute lowest, at a time when I was 24 years old and eating nothing but egg whites and the like.

When I saw the proofs a few days later after my parents had picked them up from the photographer, I felt numb.

I had been a stocky child, but when I hit high school, I gained more weight. Then I went on to college to a drama program that insisted that fat people were just "butterflies that hadn't burst forth from their cocoons of excessive flesh." My acting teacher, for example, told me that "castability" was paramount and that I needed to get my weight down if I wanted to be considered for more parts.

The first two years of my acting career weren't at all about improving my craft but about the frustrations I felt about having to "discipline" my body. Disciplining, of course, implying that my body was somehow misbehaving by daring to be anything other than thin.

After I finally lost weight through slightly nefarious means (kickboxing twice a day and a diet of tuna sandwiches and green tea), one of my acting teachers said to me, encouragingly, “You look beautiful. But you could lose even more weight around your hips."

One of my acting teachers said to me, encouragingly, “You look beautiful. But you could lose even more weight around your hips."

I thought about that every single time I engaged in compulsive restricted eating and overexercising: "You could lose even more."

Gradually I healed my disordered eating, but the fatphobia stayed present in my mind.

Fatphobia is an invasive, corrosive fear of getting fat and of fat people themselves, and it's a constant presence in our society despite the various efforts of body-positive models, bloggers, and YouTubers.

People tend to assume that fat people hate the fact that they're fat (like everyone on "The Biggest Loser") or that the fat is a stepping stone on the way to a healthy (read: skinny) physique.

My weight had nothing to do with what I was doing or eating. But people see a heavier person and draw their own conclusions about their health. I ended up going to the doctor, where I was told that the weight gain wasn't a result of anything I had done and that I would just have to “wait it out."

That meant I couldn't do anything about it at that second. Normally, I'm a horribly impatient person. But it was actually kind of freeing to realize I didn't have to control what my body looked like. It forces you to see the bigger picture.

Instead of "waiting it out" and locking myself inside until one day I magically became a skinnier version of myself, I decided to try being OK with how I looked. No, that wasn't enough — I would love how my body looked.

I was wasting so much time hating my body.

I looked at people like Tess Holliday, a model and the creator of the #EffYourBeautyStandards movement, and realized I was wasting my time hating my body.

There were so many other great things about me, like my writing career, my vast knowledge of random information about the "Lord of the Rings" movies, and my ferocious love for my family and friends.

I'm someone who always strives to know more about myself — I ended up getting into therapy last year, which proved immensely helpful in my journey to understanding why my hatred for my own body (the glorious, amazing thing keeping me alive every day!) ran so deep.

I realized that I cared way too much about what other people thought of me.

I'm someone who has a bone-deep desire to be liked. By everyone. And I thought the way to do that was to change the way my body looked. To change the way I looked. And I was so, so wrong.

Learning how to love myself changed everything for me.

I started wearing clothes that fit my body rather than trying to jam myself into things that didn't fit. I cultivated space for myself, speaking out and lending my voice to social and feminist issues. Sure, some friends faded away, but others got even closer to me.

I worked out in ways that were fun rather punishment for my body. I started going to spinning classes and got back into yoga. I ate food that was delicious but also healthy because that's what made me feel good, even if it didn't make me lose weight.

And most importantly, I came to realize that there are so many wonderful people in this world who deserve love and happiness, and no matter what size I am, I'm one of them.

In a world of poisonous self-deprecation and self-loathing, loving yourself isn't just refreshing. It can be revolutionary.

The day was scorching hot, but the weather wasn’t going to stop a Star Wars Stormtrooper from handing out school supplies to a long line of eager children. “You guys don’t have anything illegal back there - any droids or anything?” the Stormtrooper asks, making sure he was safe from enemies before handing over a colorful backpack to a smiling boy.

The man inside the costume is Yuri Williams, founder of AFutureSuperhero And Friends, a Los Angeles nonprofit that uplifts and inspires marginalized people with small acts of kindness.

To apply, campaign organizers simply tell Upworthy how their kindness project is making a difference. Between now and the end of 2021, each accepted individual or organization will receive $500 towards an existing GoFundMe and a shout-out on Upworthy.

1: Balance Dance Project: This studio aims to bring accessible dance to all in the Sacramento, CA area. Lead fundraiser Miranda Macias says many dancers spend hours a day at Balance practicing contemporary, lyrical, hip-hop, and ballet. Balance started a GoFundMe to raise money to cover tuition for dancers from low-income communities, buy dance team uniforms, and update its facility. The $500 contribution from the Kindness Fund nudged Balance closer to its $5,000 goal.

2: Citizens of the World Mar Vista Robotics Team: In Los Angeles, middle school teacher James Pike is introducing his students to the field of robotics via a Lego-building team dedicated to solving real-world problems.

James started a GoFundMe to crowdfund supplies for his students’ team ahead of the First Lego League, a school-against-school matchup that includes robotics competitions. The team, James explained, needed help to cover half the cost of the pricey $4,000 robotics kit. Thanks to help from the Upworthy Kindness Fund and the generosity of the Citizens of the World Middle School community, the team exceeded its initial fundraising goal.

3: Black Fluidity Tattoo Club: Kiara Mills and Tann Parker want to fix a big problem in the tattoo industry: there are too few Black tattoo artists. To tackle the issue, the duo founded the Black Fluidity Tattoo Club to inspire and support Black tattooers. While the Brooklyn organization is open to any Black person, Kiara and Tann specifically want to encourage dark-skinned artists to train in an affirming space among people with similar identities.

To make room for newcomers, the club recently moved into a larger studio with a third station for apprentices or guest artists. Unlike a traditional fundraiser that supports the organization exclusively, Black Fluidity Tattoo Club will distribute proceeds from GoFundMe directly to emerging Black tattoo artists who are starting their own businesses. The small grants, supported in part with a $500 contribution from the Upworthy Kindness Fund, will go towards artists’ equipment, supplies, furnishings, and other start-up costs.

4: AFutureSuperhero And Friends’ “Hope For The Holidays”: Founder Yuri Williams is fundraising for a holiday trip to spread cheer to people in need across all fifty states.

Along with collaborator Rodney Smith Jr., Yuri will be handing out gifts to children, adults, and animals dressed as a Star Wars’ Stormtrooper, Spiderman, Deadpool, and other movie or comic book characters. Starting this month, the crew will be visiting children with disabilities or serious illnesses, bringing leashes and toys to animal shelters for people taking home a new pet, and spreading blessings to unhoused people—all while in superhero costume. This will be the third time Yuri and his nonprofit have taken this journey.

AFutureSuperhero started a GoFundMe in July to cover the cost of gifts as well as travel expenses like hotels and rental cars. To help the nonprofit reach its $15,000 goal, the Upworthy Kindness Fund contributed $500 towards this good cause.

Think you qualify for the fund? Tell us how you’re bringing kindness to your community. Grants will be awarded on a rolling basis from now through the end of 2021. For questions and more information, please check out our FAQ's and the Kindness Toolkit for resources on how to start your own kindness fundraiser.