Every female character in every Disney/Pixar animated movie from the past decade basically has the same face. 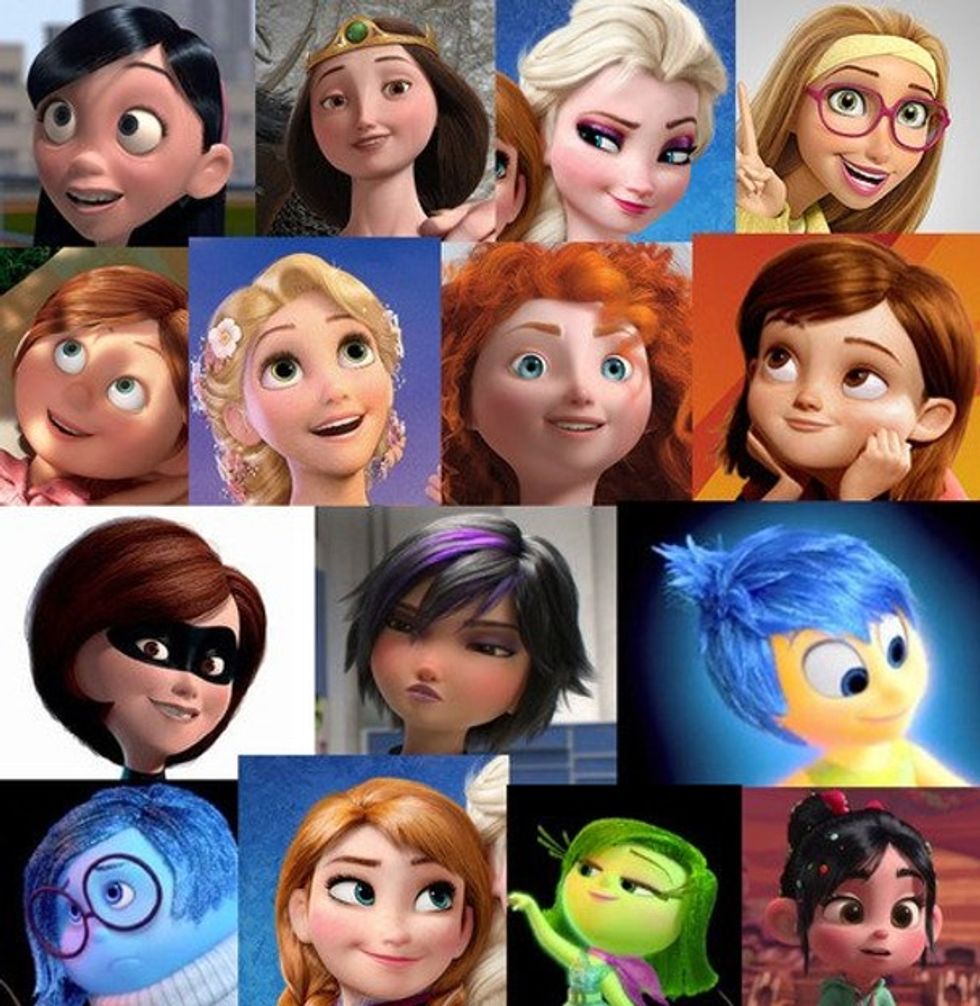 Remember when the lead animator of “Frozen” complained about how difficult it is to animate female characters?

“They have to go through these range of emotions, but you have to keep them pretty,” he said.

“So, having a film with two hero female characters was really tough, and having them both in the scene and look very different if they’re echoing the same expression; that Elsa looking angry looks different from Anna being angry.”

Yet, all of the male characters have unique and equally emotive faces — what a load of garbage, right?

It turns out that Disney’s bizarre tendency to animate female characters with minor variations of the same doe-eyed, button-nosed template extends far beyond “Frozen.”

Tumblr user Every Flavored Bean took to the site to air her grievances about a troubling new discovery. After seeing a few stills from the upcoming film “Inside Out,” they were disturbed to see this particular image:

Image by Disney via Tumblr.

“At first I thought the characters were three women and two aliens, but after seeing the trailer I realized the purple and red things were supposed to be dudes. After tracing their faces, I figured out why I was so weirded out.”

Image by Disney via Tumblr.

The three female characters in the still have what is basically the exact same facial structure: big eyes + button nose + chubby cheeks.

In order to get to the bottom of the suspected conspiracy, Every Flavored Bean, whose real name is Alex, traced the faces of various male and female characters from Disney/Pixar animated movies released over the past decade.

mages by Disney via Tumblr.

Images by Disney via Tumblr.

The results confirmed Alex’s suspicions that for some reason, Disney/Pixar refuses to animate women in any way that is realistic, unique, interesting, or — gasp — unpretty:

“Apparently every Disney woman is a clone/direct descendant of some primordial creature with huge round cheeks and a disturbingly small nose, because there is no other explanation (yes there is (it’s lazy sexism)) for the incredible lack of diversity among these female faces.DISNEY.WHY DOES EVERY WOMAN THAT YOU HAVE CREATED IN THE LAST DECADE HAVE THE EXACT SAME FACE SHAPE? AND DON’T TELL ME IT’S BECAUSE WOMEN ARE HARDER TO ANIMATE. STOP ASSUMING EVERY WOMAN HAS A ROUND BABY FACE AND A SHORT CUTE BABY NOSE. YOU CAN’T KEEP GETTING AWAY WITH THIS. GET YOUR SHIT TOGETHER. TL;DR: Boys in animated movies have faces that are square, round, skinny, fat, alien-looking, handsome, and ugly. The only face that girls get to have is some round snub-nosed baby face. That’s not right.”

The question now is why? Why does Disney insist on lagging so far behind in its physical portrayal of women?

If they’re going to attempt to push the boundaries of complex female characters and steer away from its stymied past (and sometimes present), why not make sure that the women they are portraying are as physically individual, flawed, and special as their evolving story lines?