Erykah Badu missed the mark on some recent tweets. Here's what we can all learn.

Here's why Badu's comments blame the victim, not the assaulter. 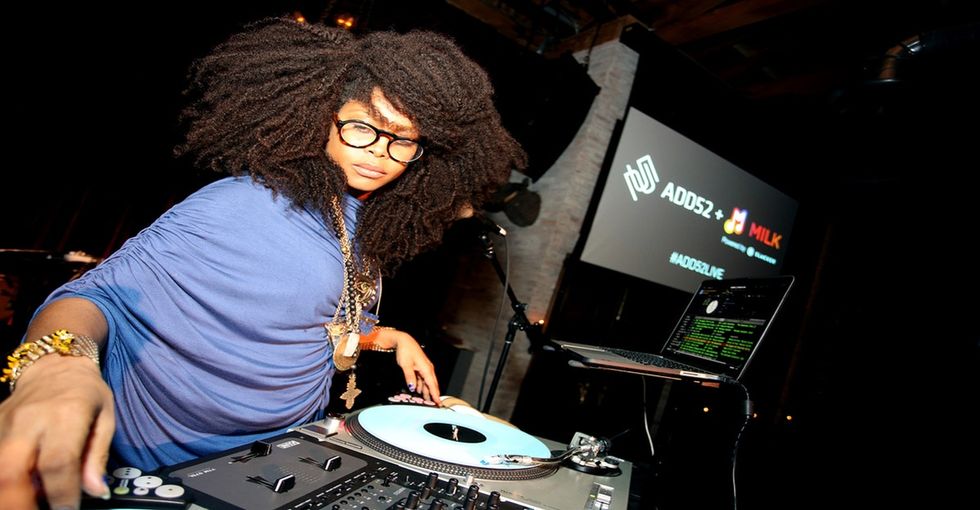 Erykah Badu is known for being an amazing performer and outspoken artist.

Photo by Rachel Murray/Getty Images for All Def Digital.

However, the singer recently shared a series of concerning tweets about sexual assault in response to a story about school uniforms.

Badu’s discussion of male and female sexuality was sparked by an Auckland school instructing female students to lengthen their skirts so male teachers wouldn’t be distracted. Many were understandably outraged.

In a disappointing series of tweets, Badu told more than 17,000 Twitter followers why she supports lengthening school uniform skirts to make young girls less distracting to their male peers.

GIF from "How to Get Away with Murder."

A 1998 study found that 7% of girls surveyed in grades 5-8 and 12% of girls in grades 9-12 said they had been sexually abused. Another study from Black Women's Blueprint found that 60% of black girls reported having experienced sexual assault before reaching the age of 18. According to the Washington Coalition of Sexual Assault Programs (WCSAP) for every black woman who reports her rape, at least 15 remain silent.

Those numbers are disturbing, and those facts only become worse when women are told they are responsible for preventing their own assaults, rapes, and even murders.

"[U] have yet to explain how longer skirts would protect and not subject young women to the sexism of society," one person tweeted at her. To which Badu did acknowledge that men should be held accountable for managing their own reactions and behavior.

However, even with Badu’s acknowledgement of men's responsibility here, her tacit approval of a plan that asks girls to take equal responsibility for preventing themselves from being preyed on by men — adult men — is still problematic.

Her words reinforce the idea that girls are responsible for whether or not a man preys on them.

Protesters demand change on perceptions of rape and sexual assault. Image via iStock.

Like so many other women — and especially black women — I grew up with warnings to "be careful around men" and "not to wear certain things" as early on as childhood. These men that we were supposed to be wary of could be any men — from a man we encountered in the waiting room at the doctor's office or on the street waiting for a bus to even men in our own families.

The idea that revealing clothing makes a person more likely to be sexually assaulted is a myth that has been repeatedly debunked. While these points of caution are certainly well-intentioned, cautionary tales from parents trying to protect their children, telling girls to cover up so men aren’t tempted only serves to assert power to the claim that adult men are uncontrollable humans.

We validate the idea that a male desire for young girls is just a fact of nature, and by doing so, we don't just put girls in danger — we reduce boys and men to thoughtless, unrestrained beings with no free will.

When Badu tweets that it is “in his nature” for a heterosexual man to be attracted to a young woman in a short skirt, she gives power to dangerous men.

She justifies the actions of people like accused killer James Dixon, who admitted to brutally and fatally beating Islan Nettles earlier this year because of what she was wearing and the fact that she was transgender.

She implies that María José Coni and Marina Menegazzo, two young women traveling in South America who were murdered by two men who gave them a place to stay, asked for their deaths.

It implies that Anita Hill, who was sexually harassed by her boss, then-SCOTUS nominee Clarence Thomas, must have been at fault somehow, not the other way around — and that her account of what happened was invalid.

It suggests that the 11-year-old Texas child who was gang raped by 18 men is to blame because she was wearing makeup, not because those young men targeted her.

It implies that these women and girls would be better off taking precautions to ensure they do not become victims — as if their attackers wouldn't find other victims instead — rather than teaching men and boys they are responsible for their own behavior.

This line of thinking tells women around the world who have been assaulted in bars and clubs, churches and businesses, schools and homes, places of danger and places of comfort, that their rapes may be justified if the conditions are right to tempt a man. We invalidate and mock their experiences when we assert that their lives and their ability to say "no" really don't matter when a man’s “natural instincts” are involved.

In the past, Badu has used her artistic platform to call out misogyny in the hip-hop industry, which makes these tweets all the more confounding.

She has also spoken out many times about the unfair criminal justice system. To use her same voice and platform to blame young girls — school-age girls — for being distracting to their male classmates and adult male teachers who supposedly are incapable of retraining themselves against such temptation is dangerous.

Seeing these tweets from her — tweets that reinforce a misogynistic culture — is extremely disappointing and completely uncharacteristic of the typically badass, woke, and talented artist.

So, no, Ms. Badu. Let’s stop telling girls to dress differently. Instead, the next time a school decides to ask all female students to dress a certain way so as not to distract their adult male teachers (who, surely, are capable of exerting self-control) or male classmates, let’s remember why treating female bodies like they’re to blame for the actions of men is a slippery slope no one wants to fall down. Doing that is much more effective in the long run.