Nearly two years after his death, three Aurora, Colorado police officers and two paramedics have been indicted by a grand jury and will face criminal charges for the killing of 23-year-old Elijah McClain. According to The Denver Post, the five individuals face charges of manslaughter and criminally negligent homicide for their roles in violently detaining McClain and injecting him with the sedative ketamine, leading to his death.

McClain's killing rocked the nation in the midst of the biggest racial justice movement the U.S. has seen since the Civil Rights era. His life mattered, and his death was a tragic example of the injustice of police brutality. The officers were originally cleared of all wrongdoing, so this grand jury indictment is one step toward accountability.

Read our story published on 6.24.20, contrasting Elijah McClain's gentle life with his unnecessarily brutal death, below.

Elijah McClain was a massage therapist who played violin for shelter kittens on his lunch break in his hometown of Aurora, Colorado, because he thought the animals were lonely. If that detail alone doesn't conjure up a picture of a gentle soul, Colorado Music described McClain as a young man who was "quirky, a pacifist, a vegetarian, enjoyed running, and known to put a smile on everyone's face."

According to The Cut, McClain's sister says he sometimes wore a ski/runner's mask because he was anemic and would often get cold. One night last August, he was walking home from the convenience store with his mask on when the police approached him, responding to a call about "a suspicious man" in the area. What ensued was "a struggle" according to police, which was only partially caught on body camera, as all of the officers' body cameras allegedly fell off during the incident.

McClain was held in a carotid hold, a controversial restraint technique banned in some cities for its potential danger, and was also given a shot of ketamine by paramedics. He had a heart attack on the way to the hospital and died there three days later, after having been declared brain dead.

He was unarmed. He was only 23. And his last words as the officers held him down are heartbreaking. 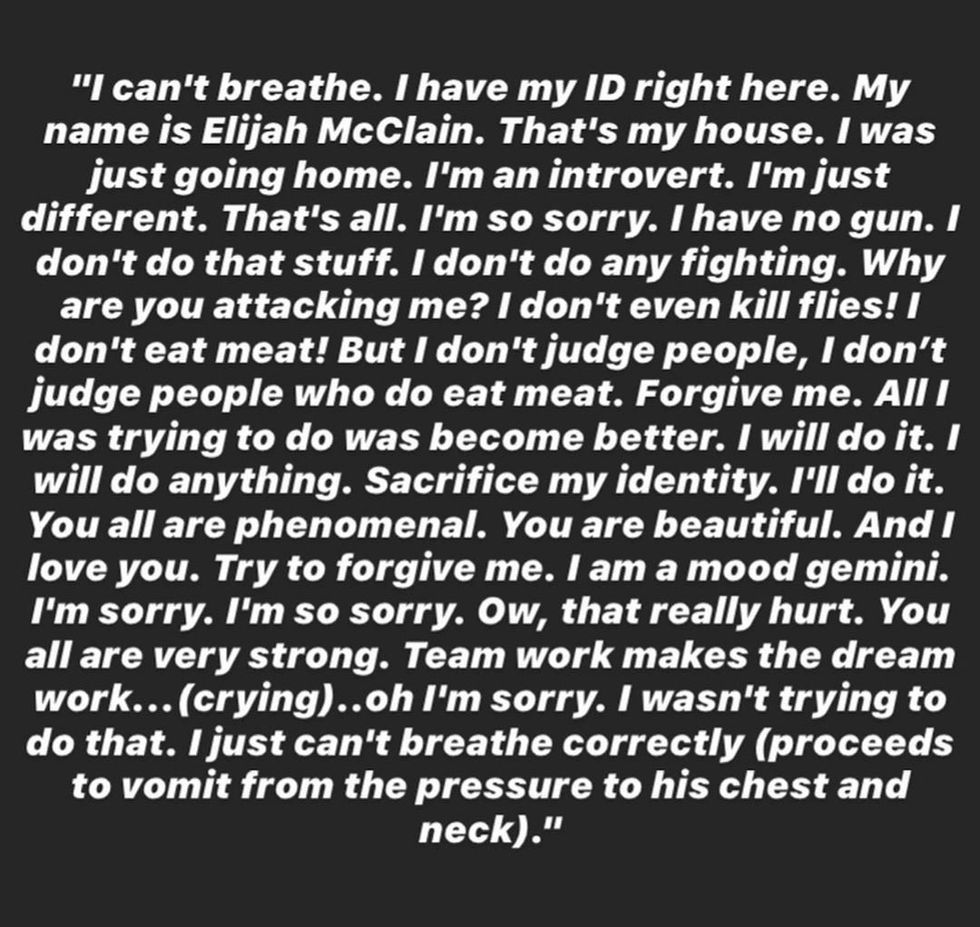 The full body camera footage of the entire evening's events was posted on YouTube by the Aurora Police Department in November, three months after McClain's death. (Discretion is advised.)

Body Worn Camera Regarding the In-Custody Death of Elijah McClainwww.youtube.com

After the body camera footage was released, according to the Sentinel, District Attorney Dave Young sent a letter to Aurora police chief Nick Metz stating, "Based on the investigation presented and the applicable Colorado law, there is no reasonable likelihood of success of proving any state crimes beyond a reasonable doubt at trial. Therefore, no state criminal charges will be filed as a result of this incident."

The officers were cleared of all wrongdoing.

However, the public outcry over the case has grown into a tsunami of calls for accountability. More than 2.2 million people have signed a Change.org petition calling for a more in-depth investigation into McClain's death.

On June 9, City Manager Jim Twombly agreed to an independent investigation of McClain's death. But even that investigation has hit snags, as the initial attorney commissioned to lead the investigation was a former police officer who specialized in defending police departments in liability cases.

"Unfortunately, an attorney with a long career in law enforcement that specializes in defending municipal police departments from liability claims doesn't qualify, in our minds, as a neutral review," the Aurora city council said in a statement.

Some policy changes have taken effect in Aurora this month. According to CBS Local in Denver, Interim Police Chief Vanessa Wilson has announced that officers can no longer use the carotid hold, they must give warnings before shooting, must intervene if they see an offer using excessive force, and relieve other officers when a use-of-force incident occurs. They will also be trained to not assume a person is suspicious based off of a 911 call.

Victims of police brutality don't need to be angels. What's wrong is wrong. But when a demonstrably tender and sweet soul like Elijah McClain is killed from a police encounter and no wrongdoing is found, it's long past time to examine the rules that govern the entire system. No one in their right mind can say this young man shouldn't be alive right now, playing violin for lonely kittens on his lunch hour.