Donald Trump's major fat-shaming problem was on full display at the debate. 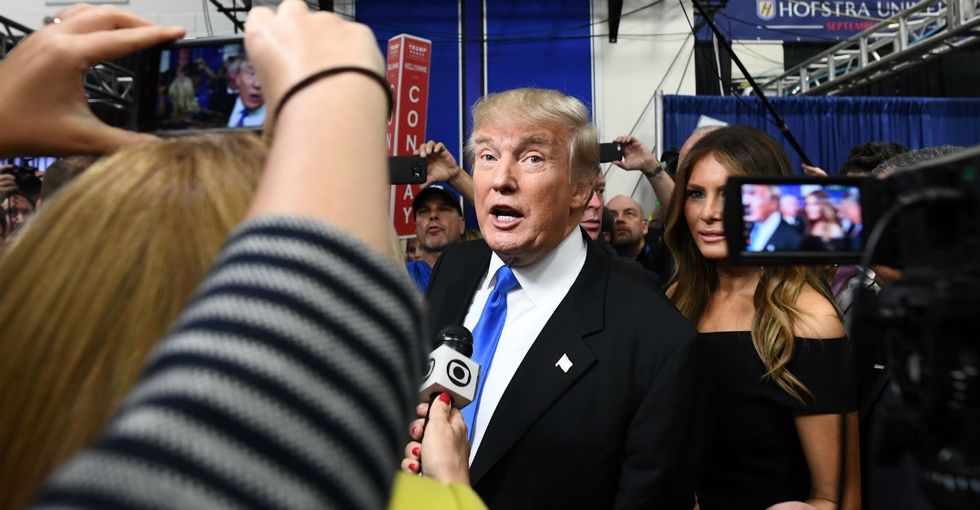 Another day, another group belittled by presidential candidate Donald Trump.

There's one group, though, that Trump has repeatedly, consistently mocked time and time again throughout his entire career, long before he got into politics — and it's one not enough people are talking about.

Trump has great disdain for fat* people. And it was on full display during and immediately after the first presidential debate on Sept. 26, 2016.

*Note: I will use the term "fat" to describe people in this article. Unlike Trump's usage, I am using "fat" as an adjective, not an insult.

Let's break down the three fat-phobic things Trump promoted at (and shortly after) the debate with some classic, cold, hard fact-checking.

Trump's two cents: After Hillary Clinton pointed out that Trump has called women "pigs, slobs, and dogs," Trump resurrected and defended his offensive, decade-old remarks against Rosie O'Donnell, claiming "she deserves it, and nobody feels sorry for her."

Fact-check: Calling O'Donnell a "slob" is a play right out of the Fat-Phobic's Handbook of Fallacies. Although our society pushes this narrative, the truth is that being fat does not mean a person is inherently lazy, unhygienic, incompetent, or any of the other negative stereotypes often ascribed to people with bigger bodies — including being a so-called "slob."

Trump's two cents: In a mind-bogglingly random aside, Trump suggested during the debate that "someone sitting on their bed that weighs 400 pounds" could have been the one who broke into the Democratic National Committee's email server — a not-so-subtle suggestion that any know-nothing, inept person could do so.

Fact-check: Again, Trump perpetuated a seemingly inconsequential — but actually pretty dangerous — connection between undesirable traits and having a body that happens to be fat.

"Trump didn’t just express the standard disgust for fat bodies," writer Lindy West penned in The Guardian. "He positioned fat people as dangers to national security. The implications are familiar, even if the context is outlandish: fat people are lazy, bedridden, unscrupulous, untrustworthy, antisocial, gluttonous (for secrets!) and worthless as anything but a punchline."

West wasn't the only one unimpressed. Former Republican rival and Trump supporter Rick Santorum was seemingly just as perplexed as many of us watching at home:

Trump's two cents: During the debate, Clinton said Trump allegedly once called former Miss Universe Alicia Machado "Miss Piggy." He doubled-down on his attacks against Machado the following morning — as though her weight would ever be a legitimate reason to condemn her as a pageant winner — explaining in an interview with "Fox and Friends" that Machado had gained "a massive amount of weight" and it had become "a real problem."

Fact-check: In his follow-up interview, Trump didn't even try to deny that Machado's weight had become an underlying issue for him. And that's ... an issue. Instead of using his platform to help change a sexist, fat-phobic industry standard, Trump allegedly threatened to take her crown away after she'd gained weight, and, astoundingly, invited reporters to film her exercising without telling her beforehand in order to show the public she was on a weight-loss regimen.

"It was very humiliating," Machado said years later of Trump's treatment. "I felt really bad, like a lab rat."

Of course, none of this is probably all that surprising to you — even if you're a Trump supporter. Voters have come to expect he'll spout whatever's on his mind, for better or worse. If that means saying something fat-phobic — like bullying overweight people at his rallies, demanding Chris Christie stop eating Oreos, or body-shaming Diet Coke drinkers — so be it.

But really, this isn't about Trump or whether his fat-phobic remarks will change the presidential race. It's about how those remarks hurt us — everyone watching at home.

Fat-shaming is often overlooked, sometimes because it becomes so frequent and so subtle that we get used to it. But we shouldn't.

Many of us have rallied together in defense of other groups — women, Muslims, military families — after Trump has insulted them, and rightly so. We should be doing the same right now for fat people.

Again, it bears repeating: "Fat" should not be an insult. It is an adjective. The problem isn't just that Donald Trump is calling people fat — it's that he uses "fat" as a catch-all term that implies a whole host of other negative, undesirable qualities.

The prevalence of fat-phobia continues to promote real-world discrimination, and comments like Trump's only add fuel to the fire.

Fat-phobic biases by medical professionals means fat people are more likely to receive poor health care services. Being fat means you look more guilty in jurors' eyes. If you're fat, you're more likely to be seen as unhealthy despite the fact you can't actually tell much about a person's health just by looking at their waistline. And because workplace discrimination is a thing, fat women are more likely to get smaller paychecks than their skinnier counterparts. (Isn't it fun when sexism and fat-phobia collide?)

To be clear, Trump's certainly not the only politician who's made fat-phobic remarks — although maybe he's the worst offender? — and expecting him to change his tune before Nov. 8 is unlikely.

I'm not holding my breath, hoping Trump transforms into a body-positivity champion — but I am hoping his fat-shaming will spur some backlash from all of us and the way we treat fat people as a society.

I'm hoping Trump's blunt, non-P.C. style will actually shed a light on how hurtful, ignorant, and dangerous this "tell it like it is" mentality can be when it comes to fat-shaming.

When reality TV show hosts make fat-phobic remarks, it's a problem — but when those remarks are coming from someone who wants to be the leader of the free world, it's an utterly unacceptable show of disrespect and discrimination.