Doctors have an idea that could save a ton of money: No more drug ads.

It'll take an act of Congress to ban the practice, but the AMA is on board. 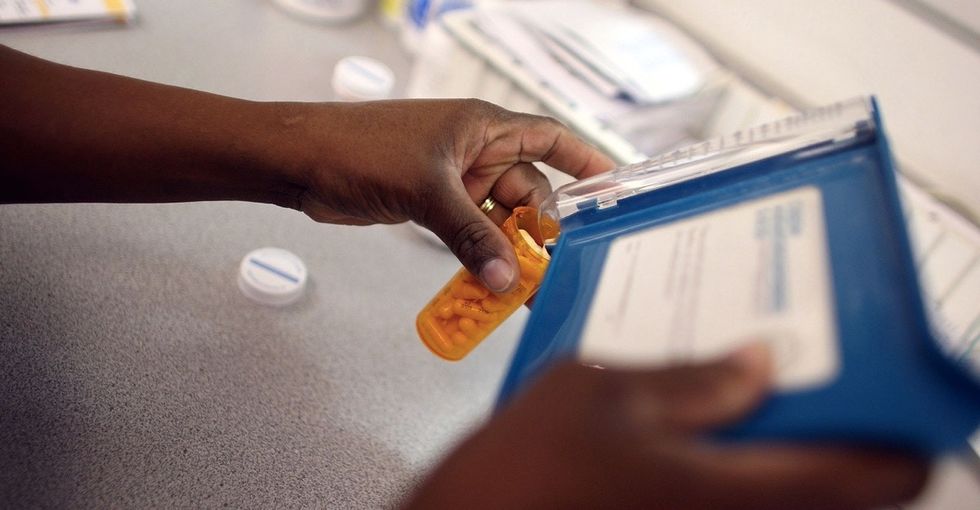 Have you ever thought about how weird it is that drug companies can advertise something you can't even buy without a prescription?

I always thought the process was supposed to be: feel sick, go to the doctor, explain my symptoms, get diagnosed by a professional, and if needed, get a prescription for a drug based on what's wrong with you.

But no, these commercials always end with the same refrain: "Ask your doctor if [our product] is right for you."

That can't be how it's supposed to work, right?

"I saw an ad that told me I should ask you if this medication is right for me, Dr. Stockphotoman." Image via iStock.

The American Medical Association announced it also thinks there's something weird about those ads.

"Today's vote in support of an advertising ban reflects concerns among physicians about the negative impact of commercially-driven promotions, and the role that marketing costs play in fueling escalating drug prices," AMA board chair-elect Patrice Harris said in November. "Direct-to-consumer advertising also inflates demand for new and more expensive drugs, even when these drugs may not be appropriate."

And while the amount of money these companies spend marketing and selling their products to doctors is also a big concern, this is a pretty big deal, too.

There are only two countries in the world that allow drug manufacturers to advertise prescription drugs direct to consumers: the United States and New Zealand. And after this announcement, the AMA hopes that number drops by half.

Drug manufacturers spend $4.5 billion on advertising to consumers each year, up 30% from just two years ago.

And $1.1 billion of that ad money in 2014 was spent by a single company, Pfizer, in promoting drugs like Lyrica, Viagara, Celebrex, and Chantix.

In addition to being a really poor way of storing medication, this just can't be sanitary. Buy a wallet, please. Image via iStock.

A strong majority of the public believes prescription pricing is a top health care issue.

An October report from the Kaiser Family Foundation found that 77% of those polled viewed "Making sure that high-cost drugs for chronic conditions are affordable to those who need them" as a top health care priority. The next most pressing issue, supported by 63% of individuals was urging the government to take action to lower prescription drug prices.

"Direct-to-consumer advertising also inflates demand for new and more expensive drugs, even when these drugs may not be appropriate."

And that's what the AMA's resolution hopes to address: the skyrocketing cost of drugs.

"In the past few years, prices on generic and brand-name prescription drugs have steadily risen and experienced a 4.7% spike in 2015, according to the Altarum Institute Center for Sustainable Health Spending," reads AMA's press release.

"I take a couple uppers. I down a couple downers But nothing compares to these blue and yellow purple pills." Image via iStock.

But if companies don't advertise, how will people know what to ask for? By trusting our doctors.

The Pharmaceutical Research and Manufacturers of America (PhRMA) is not in favor of AMA's resolution.

A representative tells Bloomberg, "Providing scientifically accurate information to patients so that they are better informed about their health care and treatment options is the goal of direct-to-consumer pharmaceutical advertising. Research shows that accurate information about disease and treatment options makes patients and doctors better partners."

And that sort of makes sense, right? But that's kind of the problem. The reason we go into doctors' offices is to have our symptoms diagnosed and treated. When we go in with a diagnosis already in mind (and with a brand name treatment to go with it), we're effectively sidestepping the whole point of having doctors.

Unfortunately, the AMA's decision doesn't actually change ... well ... anything. That's up to Congress.

And Congress has forces pushing on all sides of this issue. The most common force? Cold hard cash. That's capitalism for you.

For better care, we need to get rid of the distraction advertising plays in the process of getting diagnosed.

You can start by contacting your member of Congress and asking about their position on the AMA's recent resolution.