Why aren't more people talking about this? 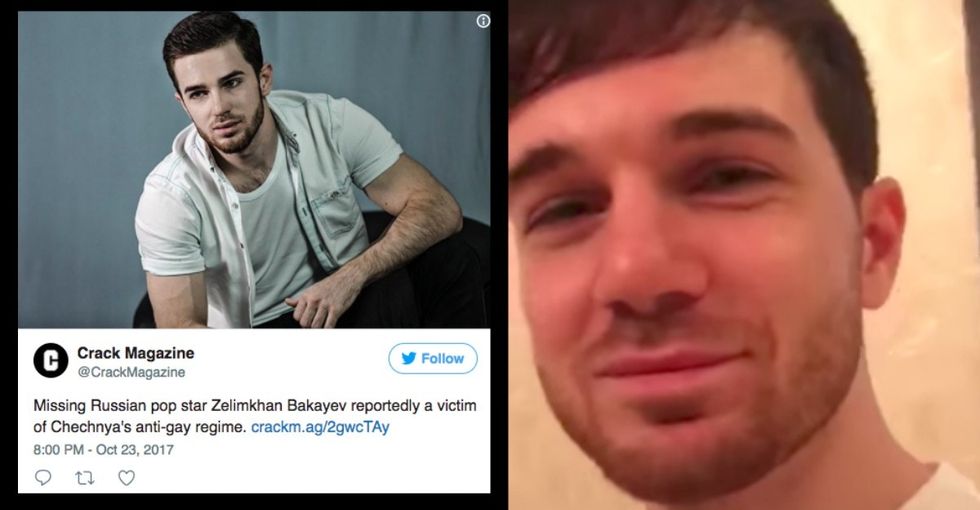 In August, Russian singer Zelimkhan Bakayev traveled from Moscow to Chechnya to celebrate his sister's wedding. Then, he vanished. His online activity came to a halt; his Instagram account was deactivated. With few options and even fewer answers, his mother called on Chechen leader Ramzan Kadyrov last month to provide clarity, desperate to know what had happened to her son.

How does a high-profile Russian singer simply ... disappear?

It's likely, officials believe, Bakayev was swept up in Chechnya's horrifying and ongoing anti-gay purge targeting queer men like him.

This past spring, Moscow newspaper Novaya Gazeta reported Chechen officials were arresting, torturing, and even murdering men believed to be gay or bisexual.

In undisclosed state prisons, officials were (and are likely continuing to) torture detainees, often pushing victims to provide information on other gay men in the region so other arrests could be made. Kadyrov reportedly set a deadline to "eliminate" Chechnya's gay and bisexual population by the start of Ramadan: May 26, 2017.

Tragically, Bakayev may be among those killed.

While Chechen officials have denied the broad accusations about the purge, multiple human rights groups operating in or around the region — notably, the Russian LGBT Network and Amnesty International — claim the arrests and murders are happening and haven't stopped in the months following initial reports.

At a press conference on Oct. 16, Russian LGBT Network founder Igor Kochetkov told reporters his organization learned Bakayev's disappearance was linked to the anti-gay purge: "At the end of August, we received confirmation of our earlier presumption that Bakayev was detained by Chechen authorities due to suspicion of homosexuality."

Following the singer's arrest in Chechnya's capital city of Grozny, bizarre YouTube videos — linked to a suspicious account that hasn't published any other content — were shared showing Bakayev alone in a room (aside from  a person filming), listening to music and drinking energy drinks, Newsweek reported. The curtains on the windows had been pulled.

In the video, Bakayev tells viewers he's spending time enjoying himself in Germany. But viewers have pointed out the drinks in the video aren't available in Germany and the furniture spotted in the room is made by a Russian company. Had the videos been made to give false hope to the public of Bakayev's safety?

Now, friends are fearing the worst. NewNowNext reported on Oct. 20 that Bakayev has been murdered, pointing to an anonymous tip as its source. As Chechnya has no free press and victims are understandably fearful to go on record, information concerning the singer has been difficult to verify. (Upworthy has reached out to the Russian LGBT Network to learn more about the status of Bakayev's situation; this article may be updated.)

The world isn't paying enough attention to Chechnya's relentless anti-gay purge. But you can help change that.

Share this article with family and friends. Contact your representatives and demand that they speak up on the matter. Sign this petition by Amnesty International calling on authorities to investigate the situation and bring those accountable to justice. Call on President Donald Trump — who has yet to speak up on the matter — to do more in pressuring Russian President Vladimir Putin and Kadyrov to halt Chechnya's crackdown on queer men in the region.

We can't let this injustice continue.

Update (10/25/17): The Russian LGBT Network confirmed via email that Bakayev remains missing: "We know only that Zelim disappeared, and that the law enforcement agencies did not do anything to find him," a communications manager from the network explains. "We cannot confirm that he is dead."