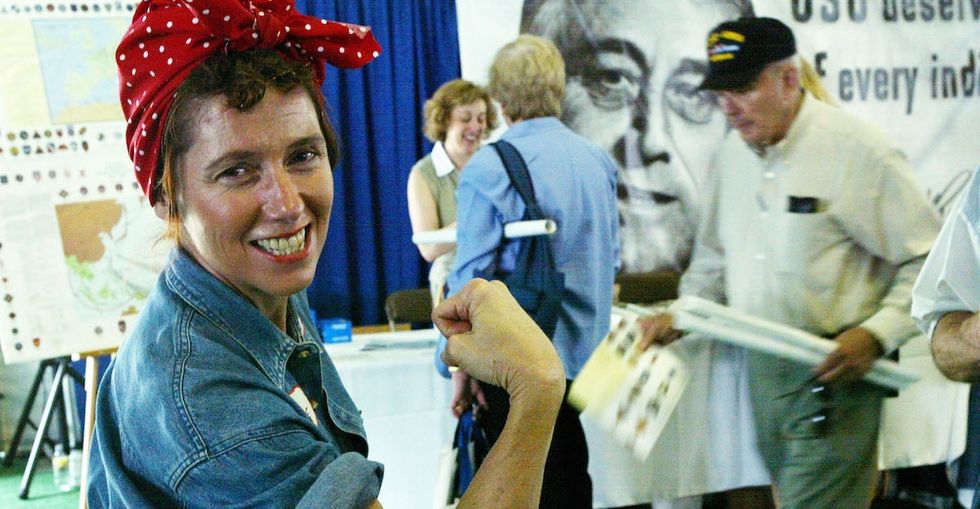 The month of March (aka Women's History Month) holds a special place in my heart.

GIF from "A League of Their Own."

Of course, it wouldn't exactly be controversial to claim that many of women's achievements often go overlooked by their coworkers, clients, and even the media ... sometimes until years after the fact.

So with that in mind, I decided to ring in Women's History Month by taking a look back at some of the incredible, world-changing inventions that we owe to the fairer sex. Here are 12 of them.

Yes, this otherworldly material that has saved the lives of countless law enforcement agents owes its invention to chemist Stephanie Kwolek, who developed it in 1964 while attempting to create a lighter, more durable material to use for car tires. Considered to be five times stronger than steel, Kevlar was patented in 1966 and is currently used in over 200 common applications.

GIF from "The Big Bang Theory."

It may be Papa who has a brand new bag according to James Brown, but in reality, Papa was only able to acquire said bag thanks to the efforts of Margaret Knight, who invented a machine capable of cutting, folding, and gluing the flat-bottomed paper bag in 1868 and later patented it in 1871. Those of us who bring lunches to work and/or suffer occasional panic attacks have never been the same.

In an effort to combat the ever-growing number of fire-related deaths being caused by ever-growing apartment complexes, New York City passed a law in 1861 requiring all multi-floor buildings to be fitted with a pair of exterior stairs. Landlords resisted at first due to how much such a set-up cost, and it wasn't until 1887, when Anna Connelly patented the iron-railed fire bridge allowing residents trapped on higher floors to scale from one roof to another, that the future of building safety as we know it was forever changed.

Maria Beasley was something of engineering dynamo in her time, securing patents for everything from foot warmers to anti-derailment devices for trains between 1878 and 1898. While it was her barrel-making machine that earned her an unprecedented payday of over $20,000 a year, Bealey's life raft, which she patented in 1882, was perhaps her most significant contribution to human history. I mean, just think of all the brilliant, lifeboat-based comedy sketches we would have missed out on without it.

5. Signal flares for that life raft

While not technically the pyro behind the flare's invention, it was the tireless efforts of Martha Coston that helped get the signal flare pushed into production. Working off a design found among her late husband's papers, Coston spent close to 10 years developing the system of flare signaling now recognized by the U.S. Navy, which became one of her first customers on the recommendation of former Capt. C.S. McCauley.

Not only were women programming computers long before "computer programmer" was even considered a job title, but it turns out that they've had a significant hand in damn-near every aspect of the computer since its birth.

Considered by many to be the world's first programmer, Ada Lovelace worked alongside "the father of the computer," Charles Babbage, to create the first computer algorithm in the early 1840s. Likewise, Navy admiral/computer scientist Dr. Grace Murray Hopper is credited with inventing one of the first high-level computer software programs (known later as COBOL) in 1959.

That thing that filled you with white-knuckled fear every time you had a doctor checkup as a kid? Thank Letitia Geer, who patented a modern one-handed syringe in 1899.

Better known as the most common method used to assess the health of a newborn baby, the Apgar score owes its name to Virginia Apgar, an obstetrical anesthesiologist who developed the test in 1952 while working at the Sloane Hospital for Women.

A trailblazing biophysicist and inventor, Mária Telkes was one of the forerunners of the solar energy movement in 1940s — well, it was less of a "movement" and more of a "thing no one had even heard about." She created both the first thermoelectric (meaning "heat to electricity") power generator and refrigerator in 1947 and 1953, respectively, and in between designed the first 100% solar heating system for the Dover Sun House in Dover, Massachusetts, alongside architect Eleanor Raymond.

Obviously, no person could ever be so bold as to make the claim of having invented stem cells, but Ann Tsukamoto was one of two people to receive a patent for a process to isolate human stem cells in 1991, which is about as close as you could get.

With all due respect to computers and solar power, those inventions are significantly lower on the list of Life's Greatest Comforts than chocolate chip cookies are — and in fact, so is everything else. Ruth Graves Wakefield knew this, which is why she invented the first chocolate chip cookie in the late 1930s.

How this woman's face is not carved into Mount Rushmore remains one of the world's greatest injustices. I mean, I can't even think of an invention greater than chocolate chip cookies...

GIF via "The World's End"

While it will never be known who was the actual inventor of beer, historian and founder of the School of Booze Jane Peyton is one of many who argues that is was women. While conducting extensive researching into the origins of beer for her book, "School of Booze," Peyton revealed to The Telegraph in 2010 that "nearly 7,000 years ago in Mesopotamia and Sumeria, so important were [women's] skills that they were the only ones allowed to brew the drink or run any taverns."

It's a theory that seems to align with how the intoxicating beverage has been perceived over the centuries. Many ancient societies typically depicted beer as being a gift from a goddess — in Sumerian culture, it was Ninkasi; for the Egyptians, it was Tenenet and Nephthys; and in Zulu mythology, it was Nokhubulwane. The list goes on.

It is said that "behind every great man is a great woman," but when looking over this list of inventions, it feels like it might be time to update that maxim, no?

Let's give it a couple of tries:

"Behind every great man ... is a shadow of where a woman maybe used to stand until she decided to do her own thing."

"Behind every great man ... is an even greater woman holding a beer and a cookie THAT SHE INVENTED."