Belize is working hard to save coral reefs. These kids may be their secret weapon. 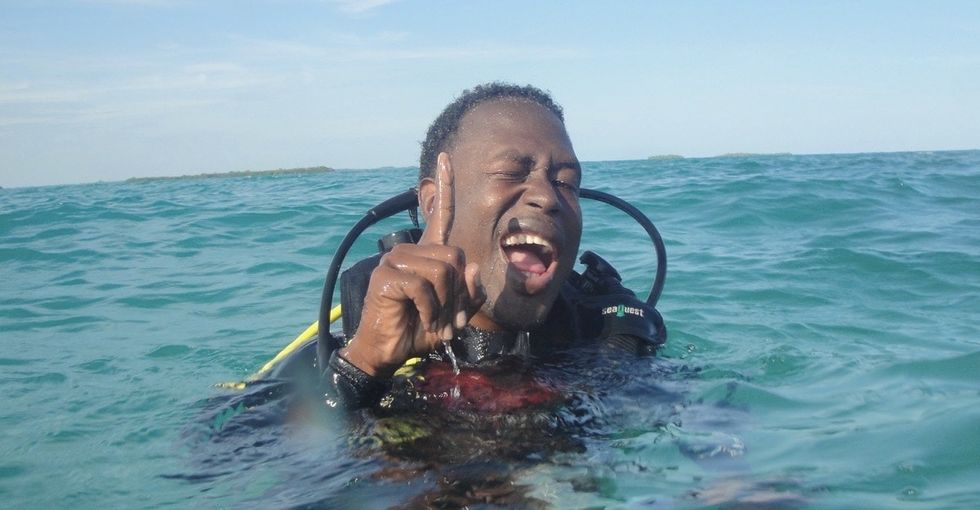 Abalone Caye is a small island off the coast of Belize, and for about a week, it's home to an important group of kids.

The island, located in the middle of the Port Honduras Marine Reserve, is home to a small research station where five local college-age kids eat, work, and live together for a week each summer before heading back to the mainland.

There's a good reason for this expedition: These kids are in training to become community reef researchers.

The Community Researcher Training Program is managed by James Foley and the Toledo Institute for Development and Environment (TIDE), an environmental institute in Belize. TIDE manages a large swath of natural areas in southern Belize, including the Port Honduras Marine Reserve. And the students, who all come from local communities, conduct research that's vital to helping us protect our coral reefs.

They learn how to do scientific research that'll help TIDE monitor and protect the reef, such as taking underwater fish counts, going out with fishermen to weigh their catches, or doing surveys of the local markets.

Foley also teaches them professional-level scuba diving as well as teamwork, which can be really important since the work means they may have to stay out on boats (or tiny islands) for hours or days at a time.

Nice, right? But let's pause for a second and zoom out. Because big picture: Our reefs are in trouble, and they desperately need good management.

Coral reefs are an amazing ecosystem, but climate change is disrupting the little animals that make reefs, causing a potentially fatal problem known as coral bleaching. What's more, poor fishing practices means that reefs have been overfished, polluted, poisoned, trawled, and even blasted with dynamite.

Looking at all these problems caused by people, it's tempting to say, "OK, fine, we'll just close them off and keep everyone out." But that's neither realistic nor fair. Communities rely on these reefs for food and income, so managed access to the reefs is necessary in most areas around the world.

But managed access isn't just about limiting the number of fishermen — it's about studying and monitoring reef health and making policy changes as necessary, which is where the Community Researcher Training Program comes in. If we can head off problems like overfishing and pollution, we can help keep reefs healthy.

Foley's program has been successful because local communities don't always trust outsiders who come in and start telling people to change.

Often these communities have been living next to and with reefs for generations. They have deep cultural, historical, and economic ties to the reefs and their way of life.

So when a foreigner comes in – who hasn't lived there, whose family hasn't spent years fishing there – and starts ordering people around, it's understandable that locals would be mistrustful.

Foley has experienced this firsthand. He said that when he first arrived at TIDE, he'd try to talk to locals the conventional way, gathering locals into a room with graphs or discussions about trends and trying to tell them about changes they needed to make. But his words weren't always received well.

"People would be standing up, interrupting me, and saying 'You don't know what you're talking about. I've been fishing here all my life, and my father before me,'" Foley said.

And outsiders aren't always the best candidates for the job anyway.

Some research or management organizations rely on foreign volunteers, but doing that can come with drawbacks. You can't always count on volunteers having a lot of scientific training. Outsiders might also not understand the local environment or culture.

Even if the outsiders are highly trained professionals, it can still be a problem. Foley mentioned seeing otherwise good science derailed by a lack of local knowledge — some bit of information the scientist missed but that all the local fishermen knew by heart.

And at the end of the day, they don't live there. While a force of foreign volunteers might care deeply about the reef on an emotional or intellectual level, they don't live with it or depend on it for their livelihoods like the locals do.

That's why putting scientific power in the hands of these local kids is an awesome idea.

In fact, many of the same fishermen who were initially distrustful of the program are now on board.

"We've actually had now fishermen standing up in meetings and saying, 'Five years ago, you telling me this, I wouldn't have believed it. But now my own daughter's collecting the data,'" Foley said.

Some of the students in the program are on an academic track already, but others are children of local fishing families and "second-chancers" — kids who've been in trouble with the law or dropped out of school and need another opportunity to succeed.

Foley's been doing this since 2011, and he says the entire program is a win-win. Even if the students don't end up as researchers themselves, they end up with a highly desirable skill set; some have since become tour guides, members of the coast guard, or even TV presenters. And they can still sometimes be called in to help from time to time, too.

This isn't just feel-good fluff, either: Good community management might be the key to saving reefs.

In July 2016, the academic journal Nature published a worldwide survey of coral reefs. The most interesting things they found were called "bright spots," places where reefs were doing substantially better than anyone expected.

A healthy reef can support a gigantic network of different plants and animals. Photo from joakant/Pixabay.

The bright spots weren't just remote, humanless areas either. Some were located right next to huge human populations and fished heavily. So what was the link between the bright spots? Where there were bright spots, local communities were actively involved in monitoring and protecting the reef.

Programs like these may end up being the heart of future reef conservation.

"It's really all about empowering local communities to participate in the management of their natural resources and building trust between the communities," said Foley.

So in the future, if you go diving and find yourself surrounded by magnificent schools of fish, sea turtles, blooms of color, and all the other signs of a healthy coral reef, you might want to remember and thank these community researchers.