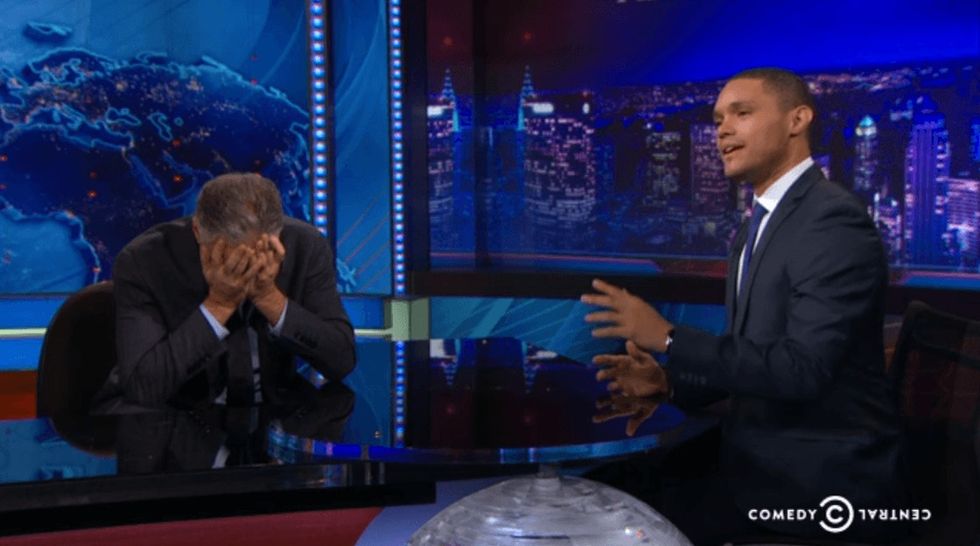 This article originally appeared on 01.22.15

Trevor Noah, one of the newest correspondents on "The Daily Show," hails from South Africa.

As a South African now living in the U.S., he wants to set the record straight about Africa.

Noah invited his new boss and their viewers to see a different side of Africa by playing a game. You can play along too.

The instructions are simple: Guess which photo was taken in Africa and which one was in the U.S.

"The beautiful highway there on the right is probably Silicon Valley. ... The one on the left, clearly been shelled by rebels. I'm going to go with ... Somalia, maybe?"

This time, Stewart was pretty confident:

"OK, this one's easy. On the left there, that's the Success Academy in Harlem. On the right there, we got ... homeless kids. I'm going to go with, uhh, in Somalia again."

Stewart thought he was starting to catch on:

"I get how this works now. The one on the right, that's Detroit."

OK, so Africa isn't just the giant mass of despair it's often made out to be. But what exactly is Noah getting at?

So let's stop paternalizing all of Africa. Our country has its own problems to deal with.

There's more. And it's really funny. Watch the video below:

Can we just admit that parenting is hard for everyone?

Parenting is hard for just about everyone. You're completely responsible for a small human that doesn't come with an instruction manual, and it's a case of trying to do the best you can with what you've got. Some people seem to think that celebrities should be infallible, so when Kevin Federline shared a video of Britney Spears being stern with her children there was always going to be negative feedback. But surprisingly, the video has, in fact, stirred up more support for the star and her parenting methods.

A good boy going for a swim.

A dramatic video from Lopburi, Thailand, shows a dog running to the rescue of a puppy that’s having trouble keeping its head above water in a fish pond. According to NowThis News, a surveillance camera captured a white dog named Soh being rescued by a larger dog named Hand.

Soh definitely appears to be struggling and calling out when, out of nowhere, Hand rushes to the rescue and pulls the dog out of the fish pond. Hand clearly could hear that Soh was in danger because it ran to its aid with purpose.

Maybe they're actually as superior as they think they are.

Cats are far more badass than we give them credit for.

Cats have a reputation for being aloof and standoffish, like they're better than everyone and simply can't be bothered. Those of us who have cats know they're not always like that … but yes, they're sometimes like that. They can be sweet and affectionate, but they want affection on their terms, they want to eat and play and sleep on their own clock, and we puny, inferior humans have little say in the matter.

There's a reason why we have obedience schools for dogs and not for cats. Maine coon or Bengal, Savannah or Siamese, ragdoll or sphynx, domestic cats of all breeds are largely untrainable little punks who lure us into loving them by blessing us with the honor of stroking their fur and hearing them purr.

But perhaps we assume too much when we think cats are full of themselves for no good reason. Maybe they are actually somewhat justified in their snootiness. Maybe they really, truly are superior to pretty much every other creature on Earth and that's why they act like it.

60 models. 12 sizes. One photo project to change how we view the human body.