Apple's giving people the tools to help them use their iPhones less. You read that right. 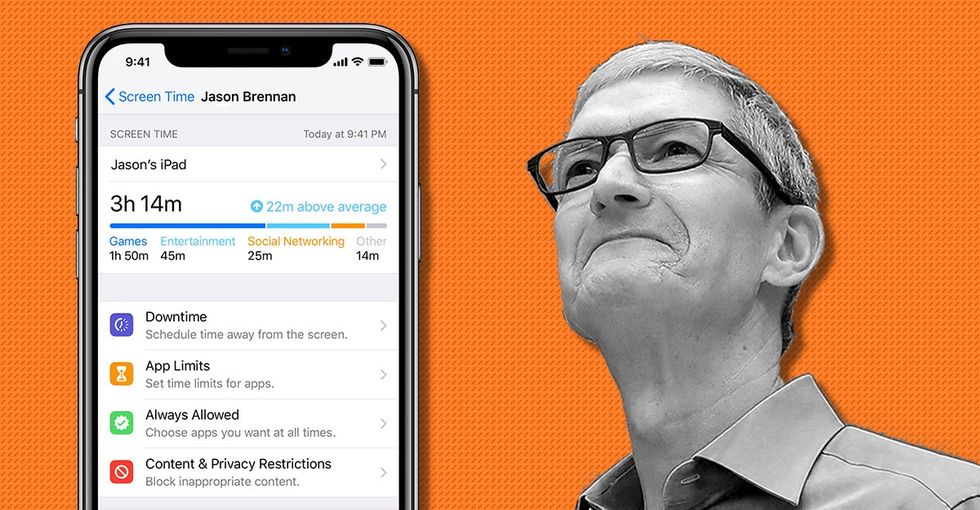 For over a decade, Apple's done everything in its power to keep your eyes, ears, and fingers glued to your cellphone. This makes their latest feature a little puzzling.

Tucked away in iOS 12, the mid-2018 iteration of Apple's mobile operating system, is a feature called Screen Time. This feature will monitor user activity about app usage, time spent on the device, and more. It will also allow people to set limits for themselves. Parental controls are nothing new when it comes to pieces of tech, but Screen Time is a little different in that it's not necessarily for children.

"With Screen Time, these new tools are empowering users who want help managing their device time and balancing the many things that are important to them," Craig Federighi, Apple's senior vice president of software engineering, said during the product announcement. In effect, Apple is giving users the option to limit themselves and the time spent on their devices.

A look at what Apple's Screen Time feature will look like on iPhone. Image from Apple.

The need for Screen Time illustrates a growing consciousness around the issue of tech addiction.

It may sound silly, but people are becoming increasingly dependent on mobile devices. Figures vary, but it's estimated that the average U.S. adult spends somewhere around four hours on their phones and tablets each day, a number that's climbed higher in recent years. Whether it's actually an "addiction" is up for debate (it's not currently listed in the American Psychiatric Association's Diagnostic and Statistical Manual of Mental Disorders), but it and similar technology-related issues are being studied.

Whether or not tech can actually be addictive, there's a lot of data to suggest that it's just simply not great for our health in large doses.

If tech addiction doesn't exist, it's not for a lack of trying.

In a November interview with Axios, Sean Parker, an early investor in Facebook and its first president, explained the driving question behind the company's development: "How do we consume as much of your time and conscious attention as possible?"

"That means that we need to sort of give you a little dopamine hit every once in a while, because someone liked or commented on a photo or a post or whatever. And that's going to get you to contribute more content, and that's going to get you ... more likes and comments. It's a social-validation feedback loop ... exactly the kind of thing that a hacker like myself would come up with, because you're exploiting a vulnerability in human psychology."

To be fair, getting people to use a product as much as possible isn't exactly a remarkable goal for any company. Facebook just succeeded in ways other businesses haven't.

Some in the tech industry are finally asking questions and drawing conclusions about the long-term effects of dependency on technology.

Former Facebook vice president of user growth Chamath Palihapitiya told an audience at Stanford University that the "short-term, dopamine-driven feedback loops we've created" pose a threat to society as a whole. "No civil discourse, no cooperation; misinformation, mistruth. And it's not an American problem — this is not about Russian ads. This is a global problem."

During its 2018 I/O conference, Google acknowledged that technology as we currently know it comes with some downsides. "Great technology should improve life, not distract from it," the company's Digital Wellbeing website proclaims. This new suite of tools, similar to Apple's Screen Time, comes with a simple goal: Ensure that "life, not the technology in it, stays front and center."

Without a doubt, tools like those in Google's Digital Wellbeing and Apple's Screen Time are a good thing. But they're probably not enough.

In his 2016 TED Talk on how "better tech could protect us from distraction," former Google design ethicist Tristan Harris laid out a plan to "restore choice" in the relationship we have with technology. The goal is to convince companies to pursue a metric of "time well spent" rather than simply time spent. Harris called on companies to judge their success on the company's "net positive contribution to human life," on designers to resist the urge to simply create unproductive time-sucks, and on consumers to "demand technology that works this way."

A healthier relationship with technology requires companies to rethink their businesses as a whole. Tools like Digital Wellbeing and Screen Time on their own don't address the underlying issue.

If you feel like you're having a tough time reducing your time on your mobile devices and you want to cut back, there are simple things you can do right now.

As co-founder and executive director at the Center for Humane Technology, Harris advocates for better design. The organization's website is full of great resources, but none better and more instantly applicable than its list of ways to "live more intentionally with your devices." Here are five suggestions for ways you can cut back on mobile device dependence:

CHT recommends turning off all notifications for everything except messaging apps, text, and email.

2. Change your display to black, white, and gray.

Did you know that you can make your iPhone display grayscale? CHT outlines how to do that, removing some of the bright colors that demand our attention.

3. Sleep with your phone in a different room.

Not only do phones have a nasty habit of keeping us up late when we're trying to sleep, but waking up next to one reinforces a habit that starts the day diving headfirst into technology.

Think about what apps you spend a lot of time mindlessly browsing. Now move them to the second screen. CHT suggests using the home screen for "apps you use for quick in-and-out tasks."

5. Use available tools and apps to help you.

Tools like Digital Wellbeing, Screen Time, and third-party apps are designed to reduce distraction. Did you know that there's an app you can download that temporarily locks you out of other apps? How about an extension that blocks out Facebook's newsfeed? There are loads of productivity apps that  make your phone usage a bit more deliberate without having to cut yourself off from technology entirely.

Technology can be wonderful, and social media can connect us in powerful new ways, but remember that too much of a good thing can have its downsides.

No one is saying that you shouldn't use the internet or your smartphone. Those things are simply a part of people's lives now. What you should do, if you want to, is set boundaries for yourself. If even the companies whose profits depend on getting people hooked on the use of their products are taking steps to help you dial things back, it's probably worth a shot.