Antarctica is the 'world's first LGBT-friendly continent,' and this penguin is pleased. 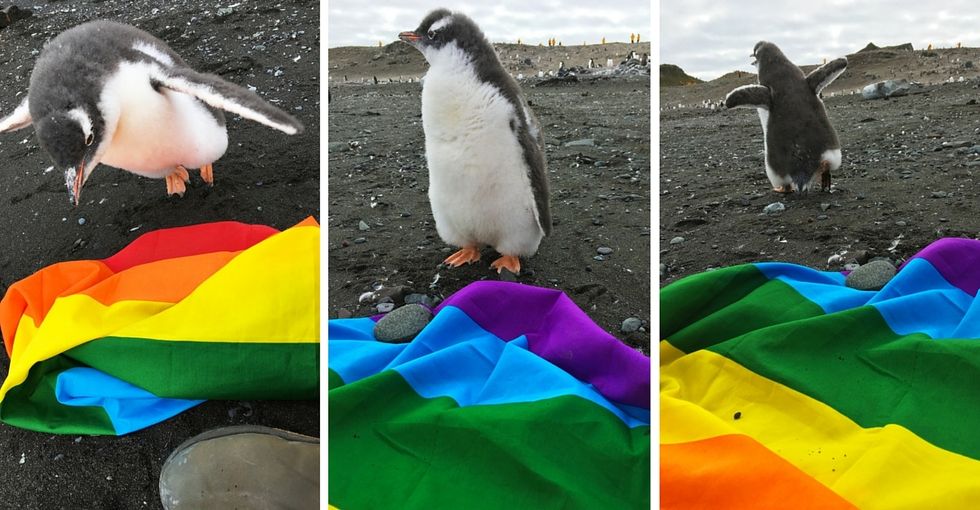 Yes, gay penguins are, in fact, a thing.

For example, this furry little guy standing tall next to a rainbow flag is totally on board the equality train for his queer bird brothers and sisters:

The group Planting Peace snapped this pic while trekking across Antarctica on a pretty worthwhile adventure. All photos courtesy of Planting Peace, used with permission.

(Your move, rest of the world.)

Of course, that title is largely symbolic — but that doesn't mean the point Planting Peace is trying to make isn't a very real one.

The group's goal is to remind us that in many parts of the world, LGBT rights are nonexistent — despite the fact the UN Human Rights Council clearly specifies LGBT people as deserving of the same rights and protections as straight, cisgender folks.

Yeah, we've come a (very) long way in the U.S. But it's still illegal to be gay in dozens of countries throughout the world, as Planting Peace pointed out on its blog.

"Let this declaration serve as a catalyst to create the momentum needed to bring LGBT rights to every continent in the world," the group wrote. "Visibility and advocacy for the rights of sexual minorities is desperately needed."

If the name Planting Peace rings a bell, it's because this isn't the first time the group has made waves online.

Most notably, the nonprofit — which focuses on humanitarian and environmental initiatives to keep "spreading peace in a hurting world" — created the Equality House adjacent to the Westboro Baptist Church in Kansas in order to counter the "church's" hateful, homophobic messaging.

Or maybe you remember when Gandalf and Dumbledore tied the knot in celebration of queer love (a move that was praised by J.K. Rowling)? Yep, Planting Peace was behind that too.

Or maybe you recall that amazing billboard that pointed out the big flaw in now-infamous homophobe Kim Davis' argument against marriage equality?

Combating discrimination is a serious job.

But Planting Peace is an example of how you can take the not-so-serious route in helping to change hearts, minds, and laws, too.

One penguin at a time.