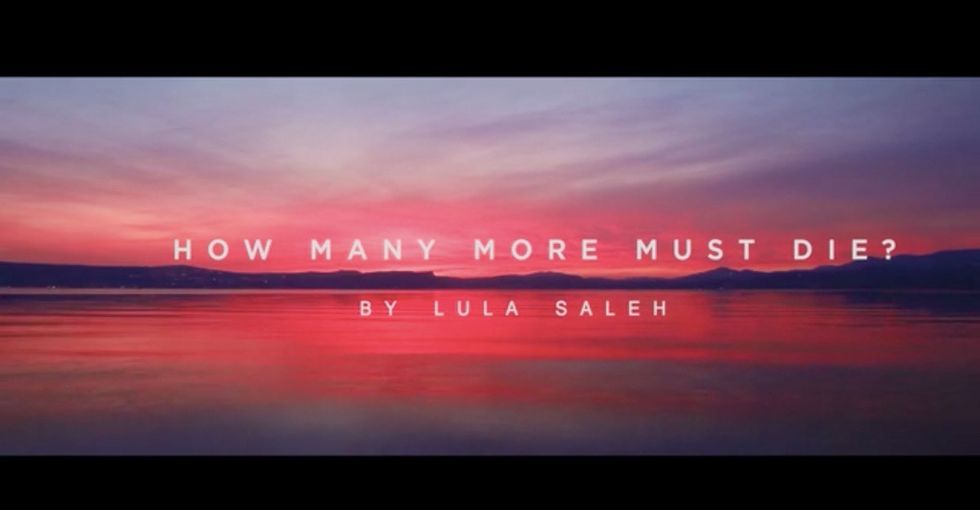 In her spoken word piece, "How Many More?" Lula Saleh shines a light on the treacherous journeys refugees endure and their uncertain futures if they survive the trip.

‌Throughout her stirring piece, equal parts poem and song, Saleh questions not just governments turning away refugees at their borders, but everyone who turns a blind eye to human suffering. ‌‌‌‌

All GIFs from Infiniti Pictures/Vimeo.

Saleh is the  daughter of immigrants and an immigrant herself, so this message is deeply personal.

Saleh is an Ethiopian-Eritrean American and spent her childhood on four different continents, so her global perspective and life as a third-culture kid informs much of her work.

Whether or not you're an immigrant, her words are poignant, thought-provoking, and more relevant than ever.

With continuing crises in South Sudan, Nigeria, and the Central African Republic, and recent conflicts in Burundi and Yemen, sub-Saharan Africa now hosts more than 18 million refugees. That's more than 26% of the world's refugee population.

Additionally, millions of people throughout the continent are also displaced within their own countries due to natural disasters, ongoing violence, and conflicts. In 2015, an estimated 12 million people in 21 African countries experienced ongoing displacement. In Nigeria alone, the figure reached 1.8 million people displaced at the end of 2016.

While much of the world's attention has gone to the refugee population fleeing war-torn Syria and Libya, journeying to western Europe, it's important to remember and support organizations providing emergency shelters, supplies, education, and medical care to refugees and displaced people across Africa as well.

This is a global problem that will require thoughtful, compassionate solutions. There's enough passion, energy, and heart to go around.