An open letter to Barack Obama regarding that first post-presidency speech. 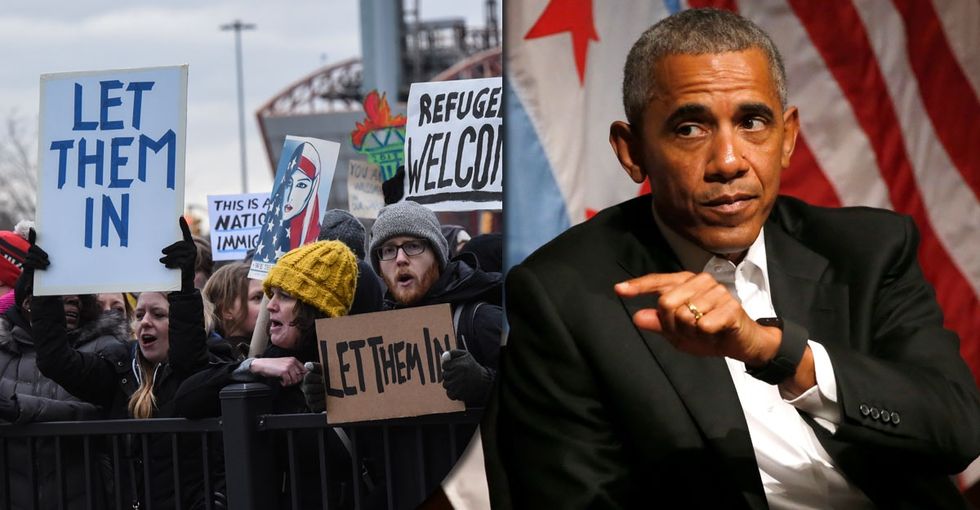 Can we call you Barack now?

You earned that time off.

We saw your speech in Chicago the other day.

You still got it with the jokes!

Man, that was a good speech. So good it made us cry. Not sure it was a happy cry.

A man reacts to protesters at the Women's March in January. Photo by Andrew Caballero-Reynolds/AFP/Getty Images.

Gotta be honest, when you left the White House, our emotions were not in a good place.

An emotional Gerardo Ruiz reacts to results of the U.S. presidential election on Nov. 8, 2016. Photo by Frederic J. Brown/AFP/Getty Images.

In the back of our minds, we secretly hoped that you'd come galloping back atop a golden unicorn, laminated copy of the Constitution in hand, and tell us to follow your lead with those famous words you ... uh, never really said.

And we know you were worried about us when you left...

...that we might not be up to the challenge.

But life is funny.

When you went away, something kind of weird happened.

We didn't shut the door, pull up the covers, and go to sleep for 500 years.

Protesters outside the National Press Club and the Deplorable Ball in Washington, D.C., in January. Photo by Paul J. Richards/AFP/Getty Images.

We got up, and we got organized.

And we handled this protesting stuff on our own. Because we had no other choice.

In a way, peaceing out to Fiji was one of the best things you could have done for us.

While you were enjoying a well-earned restorative kitesurf with Branson...

Protesters settle in at the Women's March on Washington. Photo by Mario Tama/Getty Images.

While you were regaining your sense of style...

...we were piling into airports to protest an unjust Muslim ban.

Demonstrators at O'Hare Airport protest the executive order that refuses admittance to refugees and places a ban on travel from seven Muslim-majority countries. Photo by Scott Olson/Getty Images.

We were chanting in the cold.

We were putting our law degrees to work on a chilly terminal floor at 4 a.m.

And we were winning.

While you were hanging out in the South Pacific with Oprah and Springsteen...

...we were organizing in our communities, calling our elected officials, and holding their feet to the fire.

We got Paul Ryan to admit that "Obamacare is the law of the land."

U.S. Speaker of the House Paul Ryan speaks after Trump's health care bill was pulled from the House of Representatives on March 24, 2017. Photo by Win McNamee/Getty Images.

Tens of thousands of women decided to run for office.

A new generation of activists was born, and an older generation came roaring back to life.

(From left, in back) Ginny Suss, Carmen Perez, Gloria Steinem, Linda Sarsour, and Tamika Mallory and (in front) Mia Ives-Rublee appear onstage at the Women's March on Washington. Photo by Theo Wargo/Getty Images.

We remembered what you said when you left office. You warned us what was at stake.

You encouraged us to get out and fight for our values. In person.

You reminded us what democracy requires of us. Specifically ... us. And not just when there's a big election on the horizon.

We thought you'd have to hold our hand through it. But here's what we learned:

It turns out, we're pretty good at this stuff on our own.

People take part in a protest called No Ban! No Wall! Get Loud! at Grand Central Station in March 2017. Photo by Kena Betancur/AFP/Getty Images.

When the chips are down, we can pull ourselves together and fight back.

The crowd reacts to U.S. Rep. Jason Chaffetz at a town hall meeting in Utah in February. Photo by Rick Bowmer/AP.

We don't always need you to show us the way after all.

The March for Science on April 22, 2017, spanned many cities, including Los Angeles. Photo by Sarah Morris/Getty Images.

But we're glad you're back and down to help.

In the words of our all-time favorite meme of you...

Thanks for the pep talk.

Glad to have you on the team. Let's do this.