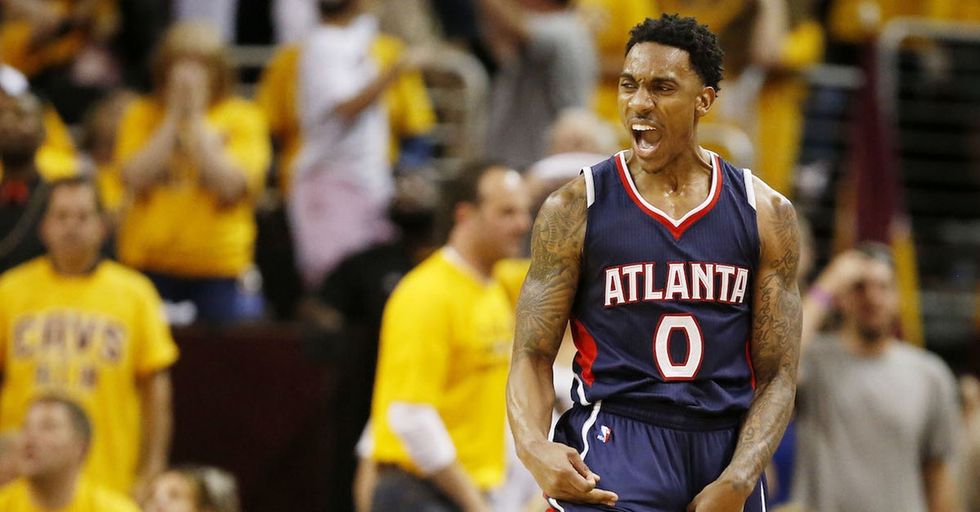 NBA star Jeff Teague will make around $8.8 million this season. And he just moved into his parents' basement.

Teague, a first round pick of the Atlanta Hawks in 2009, has played seven seasons in the NBA. This offseason, though, he was traded to the Indiana Pacers —— not far from his hometown of Indianapolis, where he already owns a home.

The funny thing is, Teague gave the house to his parents a few years back since he was spending all his time in Atlanta. Now that he's back in town, he's moving back into the house — and he's not asking his parents to leave.

"They got the master, I just got the basement," he said in an interview on Fox Sports 97.5

When asked how long he expected to live with his folks, Teague said plainly, "The whole year." In response to this, the hosts jokingly asked if he had a curfew, a bedtime, or had to do chores.

You might expect a hot-shot athlete to quickly offer up some explanation for living at home, like I'm busy looking for a place, or It's only temporary.

But not Teague. He didn't seem fazed by the jokes, and he didn't offer to elaborate.

Teague isn't alone when it comes to living with family.

In fact, recent findings from Pew Research shows that for the first time in 130 years, living at home with parents is the most common living arrangement for 18-34-year-olds in America. And internationally, this kind of arrangement has been super common for a while.

Some people are quick to jump on data like this as evidence of a coddled generation unable to solve problems for themselves. Folks even call this generation the "boomerang generation" (as in, they always come back).

But there are a lot of other factors going on here, most of which have nothing to do with coddling or laziness. Here are a few:

1. Young people aren't rushing to commit to a romantic partner, and a lot will never get married.

Marriage is great and all, but it's not mandatory. Photo by Lê Düng/Flickr.

One big reason for the rise in young people living at home is that "romantic coupling" has seen a sharp decline: In other words, young people are waiting longer and longer to move in with spouses (if they ever do at all, and a lot aren't).

And for many single folks, living with family beats living alone.

2. Jobs that can pay enough to keep up with rising housing costs are hard to find.

While employment isn't a problem for Teague, a lot of young people live at home to stay afloat while looking for a job or trying to save as much of their paycheck as they can for a down payment on their own home. It sure doesn't help that housing costs have been on the rise for years.

Add in the fact that the average college graduate these days comes out of school with over $30,000 in student debt, and it just makes economic sense for some young people to live with their parents when they can.

3. Parents are living for a really long time and some need help.

They raised you! Helping out when they get older is the least you can do. Photo by Sean Gallup/Getty Images.

Some estimates say the number of adults caring for their aging parents has tripled in the past 15 years, which makes sense because life expectancy has been rising for decades.

This kind of care can be taxing for young adults; they may have to take time away from work, pay out of pocket for extra help, or even just spend a ton of time helping their parents with daily tasks.

Moving back home can help with affordability and convenience for people in this situation.

4. Some young people actually want to live at home.

In Psychology Today, Bella DePaulo, Ph.D., referenced one study that surveyed 18-24-year-olds who had never left their parents' homes. Most of them said part of the reason they stayed was because — gasp — they actually liked living there.

She also writes that there aren't major differences in life satisfaction between parents of adults who never left home, those who left and never came back, or those who have moved in and out over time. So maybe getting to spend a little extra time together in the same house isn't the worst thing in the world.

If a 28-year-old millionaire wants to live at home, maybe it's time for us to recognize that it's a perfectly acceptable choice for anyone.

What if, instead of valuing moving out on our own above all else, we valued people who grow up to be happy, empathetic, productive members of society ... even if they're doing all of that from their parents' basement?

In other words, if a situation works for you and your family: go for it! It's clearly working for the Teagues. We may not know exactly why or how their arrangement works, but Teague obviously doesn't feel like he owes anyone an explanation.

And that's the way it should be.