American Airlines was forced to apologize after booting a mother and son with a completely harmless 'rash.' 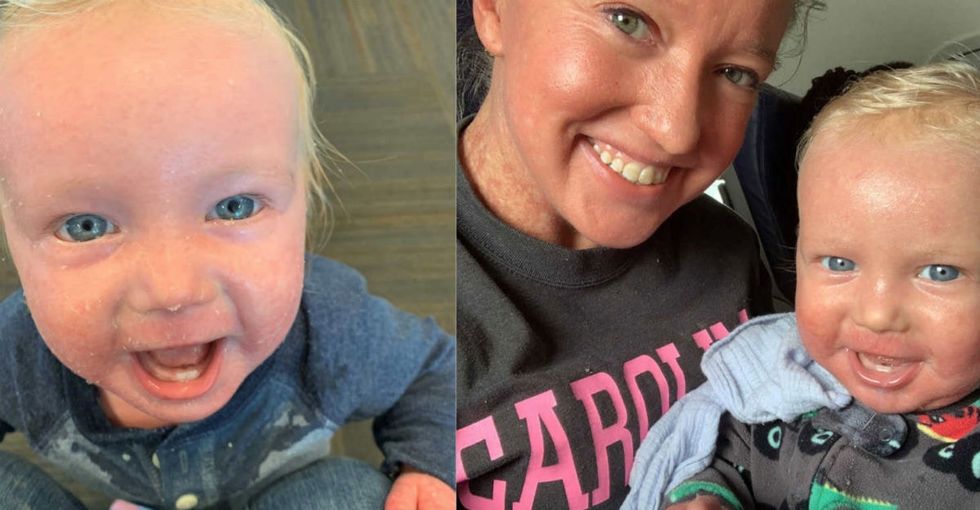 As if exorbitant checked bag fees weren’t bad enough… American Airlines was forced to apologize to Jordan Flake after wrongfully booting Flake and her one-year-old son from a recent flight to South Carolina.

Flake, who was heading home after visiting her military husband before his deployment, was shamed for her skin condition by American Airlines staff.

Shortly before takeoff, an employee quietly asked Flake about her “rash.” Both Flake and her son, Jackson, have a genetic (and non-contagious) skin condition which causes dry and scaly skin.

Flake and her son were forced to leave the flight over something that in no way put anyone in danger. In a bit of painful irony, this happened on Rare Disease Day.

Flake posted about her experience on the website LoveWhat Matters.

According to Flake, “the employee asked if I had a letter from a doctor stating it was OK for me to fly. I explained to him it was called Ichthyosis, a genetic skin condition I share with my son.”

“He walked up to the front to talk to the crew. He apparently also Googled it during that time. He came back and said he apologized, but we ‘wouldn’t be able to fly,’ and we ‘had to get off the plane,’” wrote Flake.

“He helped me get my bags and Jackson. He talked to the pilot as we were getting off. The pilot seemed OK with it, but the flight attendant rudely said (without even acknowledging me) ‘well she doesn’t have a letter from a doctor, so…’”

Flake was rightfully upset by the incident. The flight attendant called attention to Flake’s body in a negative way. “I have never felt more aware and embarrassed about my skin, or the condition I share with my son,” wrote Flake.

“After I left and got in my hotel, I had to go to the store. I felt like everyone was staring at us because I now had this negative feeling about myself. I should never feel ashamed of myself for the way I was born. This was unacceptable and uncalled for. I have never been asked to show a letter. I have never been told by a doctor that I had to have documentation stating I wasn’t contagious, or whatever they were assuming."

"In 2019, it’s time we stop discriminating. Ask questions, and listen.”

Even though the experience was unpleasant, Flake feels as if it can lead to growth and awareness.

“If anything comes out of this, I hope it’s that whatever individual put this into action realizes they were wrong and unkind, and will think twice next time. If I am not to judge people based on their gender, skin color, or relationship status, then I should not be judged based off of the way I was born,” Flake wrote.

Nobody should be given a hard time because of a skin condition. Even if someone isn’t aware of a specific skin condition, they can still listen to the people who have it. Why shame someone when you can understand them instead? Hopefully, the next time that flight attendant encounters someone with less than perfect skin, they won’t be so quick to judge.

Keep ReadingShow less
heroes
Get stories worth sharing delivered to your inbox
By signing up you agree to Upworthy's privacy policy.
Internet