America Ferrera's speech at the Women's March sends a powerful message against hate.

The 'Superstore' actress takes a stand for our country's core beliefs. 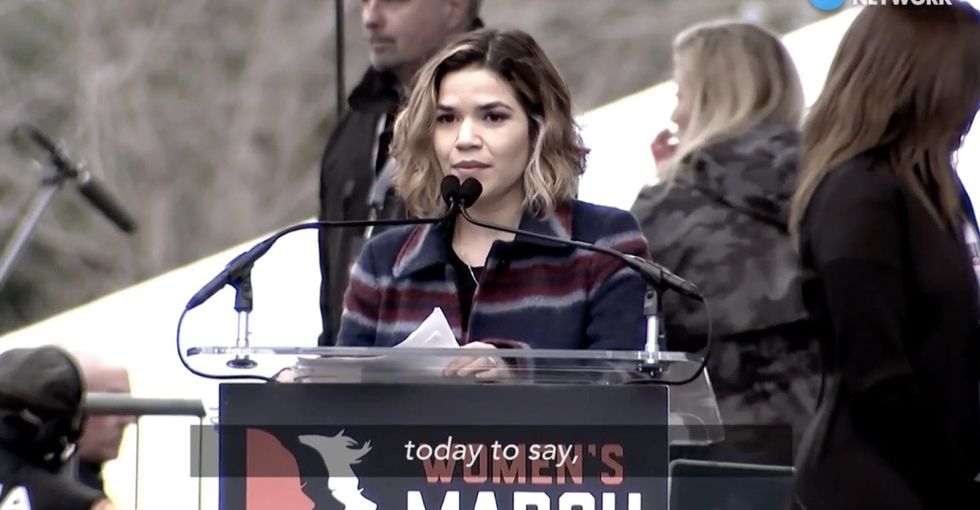 "We are America," actor America Ferrera told a crowd of thousands at Washington, D.C.'s Women's March.

The message, a rebuke of the idea that any one politician can truly represent the great diversity that makes the U.S. the country it is today, came just one day after President Donald Trump was sworn into office.

"It’s been a heart-wrenching time to be a woman and an immigrant in this country ― a platform of hate and division assumed power yesterday," Ferrera told the marchers. "But the president is not America. His cabinet is not America. Congress is not America. We are America."

Actress America Ferrera speaks at the #WomensMarch in Washington, DC: "Our rights have all been under attack" https://t.co/fVsrXa6oaj
— CNN Politics (@CNN Politics)1485012010.0

The daughter of Honduran immigrants, Ferrera holds an acute awareness of what some of Trump's policies would mean for people like her parents.

"We march today for the moral core of this nation against which our new president is waging a war," she said. "He would like us to forget the words 'Give me your tired, your poor, your huddled masses yearning to breathe free' and instead take up a credo of hate, fear, and suspicion of one another. But we are gathered here and across the country and around the world today to say, Mr. Trump, we refuse."

Trump may be our president, but that does not mean he gets to dictate our country's values.

Ferrera spoke out against forms of division — some of which existed long before Trump's political rise — and urged the country to stand in solidarity with people of different races, ages, genders, sexualities, and countries of origin.

Human rights should not be a matter of debate, and we should not allow ourselves to lose those rights just because a politician says so. We cannot and should not go down without a fight. Ferrera's speech sends that message loud and clear.

To be sure, elections have consequences. The question remains, though, to what end? We must fight to affect the policy decisions our politicians — including Trump — make. We must push back on injustice. We must never forget who we are.

Watch a clip of Ferrera's speech below: