After tweeting on the #ShoutYourAbortion hashtag, these women got an earful.

They're not gonna take it. 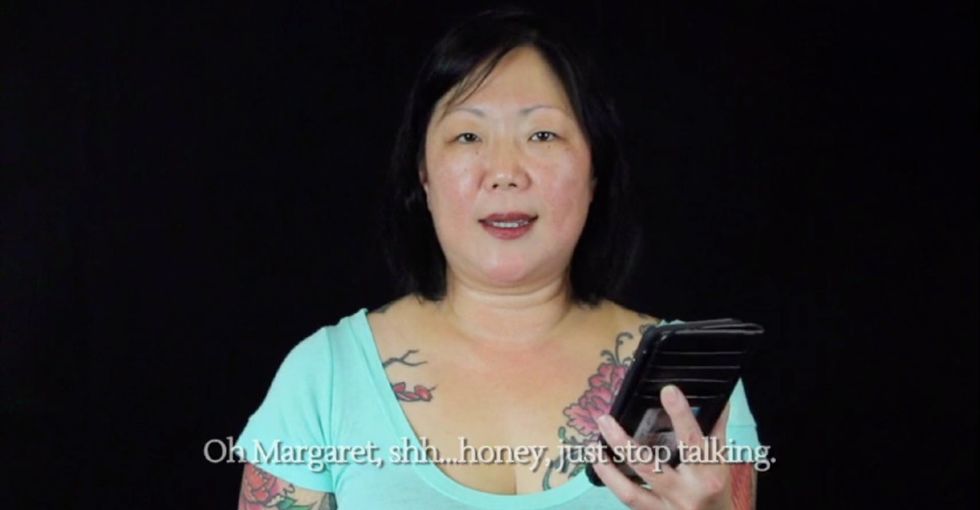 A new video from A is For takes a look at the always friendly (terrifying) world of being a woman on the Internet.

It doesn't really matter what the topic being discussed happens to be; as sure as the sun will rise, women will find themselves on the receiving end of threats, lewd messages, and just general awfulness.

Amelia Bonow, #ShoutYourAbortion founder. GIFs via A is For.

So, in a video inspired by Jimmy Kimmel Live's "Celebrities Read Mean Tweets" series of clips, A is For brought us "Abortion Tweets Theater."

The video features women reading tweets they received after participating in the #ShoutYourAbortion hashtag.

The hashtag began as a way for those who have had abortions to share their stories with the world. Why? Because society views utter shame, self-loathing, sadness, and/or regret as the only acceptable ways someone should feel about having an abortion. The hashtag helped round up some really interesting stories that touched on the why, when, and how of people who've had them.

The goal was to break down the stigma that surrounds a perfectly safe and legal procedure. As might be expected, the reaction from certain corners of the Internet was less than positive.

Death threats made up a fair segment of the tweets.

There were a disturbing number of references to Hitler.

There were some folks demanding that anyone "shouting their abortion" story should kill themselves.

And then just a bit of name-calling added in for good measure.

So why #ShoutYourAbortion? Why endure this type of harassment? Because what other option is there, really?

It takes bravery to come forward and speak openly about something society has told you to keep hidden, but if there's any hope of changing that expectation, people need to make themselves heard. #ShoutYourAbortion was not a collection of people "bragging" about having an abortion; it was simply people telling their stories.

You can watch the full, uncensored video below.