After Hillary Clinton's historic nomination, a sign appeared at Susan B. Anthony's grave. 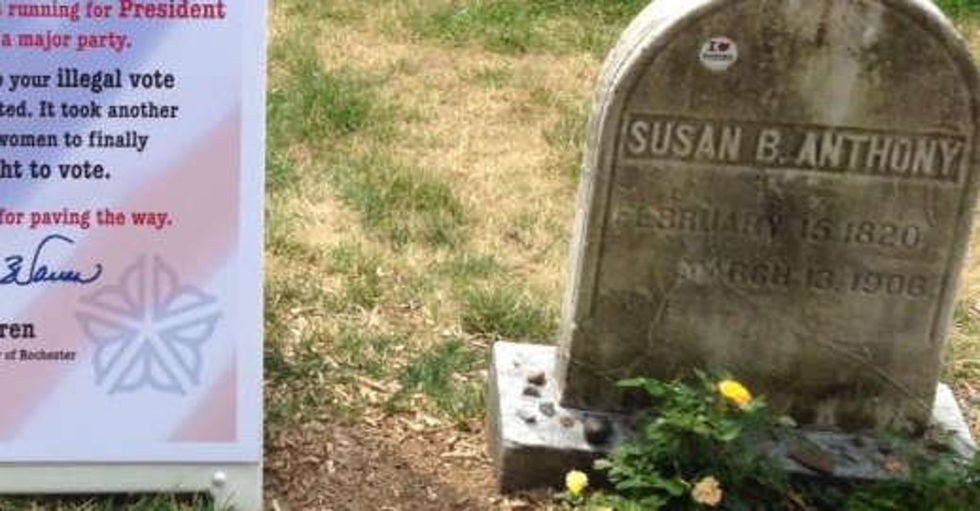 Photo by City of Rochester, used with permission.

On Wednesday, July 27, the mayor of Anthony's hometown, decided it was time to update the famed suffragist on the progress of her life's work — by posting a sign next to her headstone.

The sign reads: "Dear Susan B., We thought you might like to know that for the first time in history, a woman is running for president representing a major party. 144 years ago your illegal vote got you arrested. It took another 48 years for women to finally gain the right to vote. Thank you for paving the way." Photo by City of Rochester, New York, Mayor's Office/Facebook, used with permission.

Lovely Warren, who was elected Rochester's first woman mayor in 2014, told Upworthy that she wrote the tribute to celebrate Anthony, a personal hero.

"Had she not joined with other women to fight for change, I probably wouldn't be where I'm at today," Warren said.

The tribute included two sign boards, where visitors could register their thanks to Anthony. According to the mayor, both sign boards have been filled.

Visitors sign the tribute board. Photo by City of Rochester, used with permission.

"That was one thing that my grandmother really instilled in me, and my cousins, and my family, that you never forget those people that made the sacrifices for you," continued Warren.

Warren said she hopes the sign helps those who stop by Anthony's gravesite appreciate the historic significance of Hillary Clinton's candidacy — even if they don't plan to vote for her in November.

The tribute, she explained, is also a reminder to keep fighting for the causes Anthony championed, but was unable to see through in her lifetime.

"I want everyone to recognize that this is about moving forward, regardless of anything," Warren said. "Never forget where we came from. Never forget that women didn't have the right to vote, and we had to pass a constitutional amendment to give women the right to vote. Same thing for African-Americans. Don't forget about the fact that even to this very day, women earn less than men."

"No matter what happens in November, I think that the fact that we're having the conversation is the most important piece," Sarah Abbamonte, a spokesperson for the National Susan B. Anthony Museum, told Upworthy.

Anthony was born in Adams, Massachusetts, in 1820, and started her career as an abolitionist before eventually turning her attention to suffrage.

She was arrested and fined for casting a ballot in 1872 — but refused to pay the penalty. The 19th Amendment, which guarantees women the right to vote, was passed the year Anthony would have turned 100.

Abbamonte said that Anthony was inspired by Victoria Woodhull and Belva Ann Lockwood — women who ran for president in Anthony's lifetime — and would have been eager to see a woman so close to the White House.

She hopes that Clinton's run — like Anthony's activism — will inspire future generations in the same way.

Photo by City of Rochester, used with permission.

"Who knows?" Abbamonte said. "There could be some young girl who's watching the news and says, 'Hey, I want to do that.' And she could go on to change the world in ways we can't even anticipate now."

The new daddy 'poo timer' is a funny gift idea, but it calls attention to a real issue

Tod Perry
via Dude I Want That

There are many, many things that change in a household after children arrive. The number of toys and bright-colored items strewn about the house make it look like a clown moved in.

Parents soon give up any chance of watching a TV show they enjoy until after the children go to bed.