A short comic gives the simplest, most perfect explanation of privilege I've ever seen. 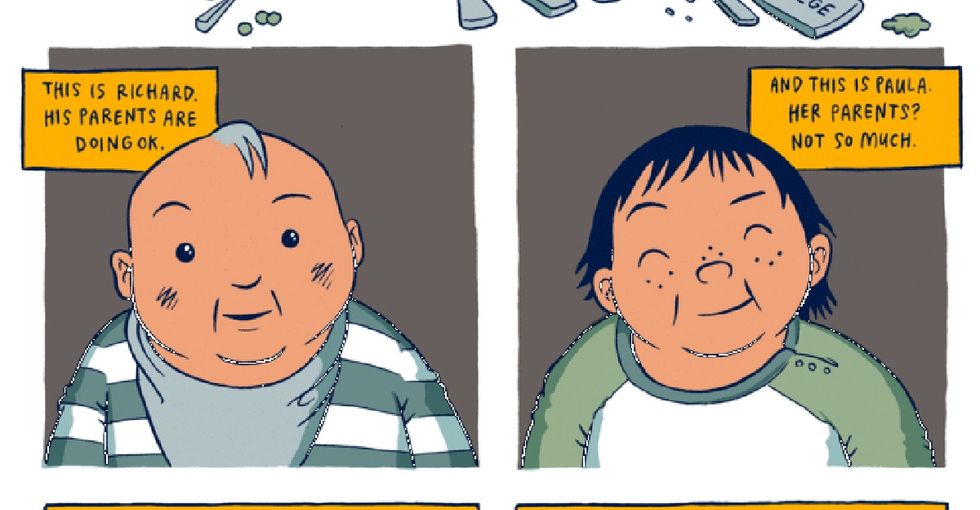 This article originally appeared on 01.20.16

Privilege can be a hard thing to talk about.

Oftentimes, when it's implied or stated that someone is "privileged," they can feel defensive or upset. They may have worked very hard for what they have accomplished and they may have overcome many obstacles to accomplish it. And the word "privilege" can make a person feel as though that work is being diminished.

The key point about privilege, though, is that it doesn't mean that a person was raised by wealthy parents, had everything handed to them, and didn't have to do much other than show up.

Privilege means that some of us have advantages over others for any number of reasons we don't control — like who we are, where we come from, the color of our skin, or certain things that have happened in our lives.

Even when things haven't come easy for some people, they can still have privileges that others don't have.

Illustrator Toby Morris did some thinking about the concept of inequality and privilege, and he found one major problem.

He did a lot of research to learn about it, but as he started to really understand privilege, he found that a lot of the information about privilege felt very academic and technical. He felt it was important to "talk about this heavy stuff in a really simple and clear way," Morris explained to me in an email interview.

That's what led him to create and illustrate this incredible comic on privilege for the The Wireless.

He did an amazing job. Check it out:

This comic is property of The Wireless, where it originally appeared. It's shared here with permission.

This is a great way to explain privilege to someone who's having a hard time understanding — or someone who doesn't want to recognize it.

"Comics are very human and accessible — they're non-threatening and quite inviting to a reader," Morris said. "It's a lot less daunting than picking up a giant book or trying to decipher a really long or really dense article."

Make no mistake: Morris isn't taking away from hard work in his comic.

"I'm not trying to say I'm against that idea that if we work hard, we succeed," he said. "I would like to think that is true, for the most part, but I just think people often forget or don't realise that our starting points, or our paths to success, aren't all even. Some people have to overcome more obstacles in the path to succeeding than others."

He was also quick to point out that this isn't about anyone needing to feel bad or guilty for the privileges that they have, but rather it's about honesty and understanding — because maybe that's what could lead us to a better place.

"Acknowledging the issue is one step towards addressing it hopefully," he said.

Ultimately, success — or lack thereof — can be about hard work and other factors, some of which are beyond our control.

A lot of people have been able to relate to this comic — both sides of it — and have reached out to Morris to share.

"Personally, I've grown up somewhere in the middle," he said. Because his dad was in the army, Morris moved around a lot as a kid. "I experienced a lot of different neighbourhoods and schools and friendship groups — some well off, some not so much — and that experience lead me to this belief that ultimately people are all pretty similar wherever you go, we just don't all have the same chances in life."