A shelter told a Hollywood writer that their residents wanted to help. So he ran with it. 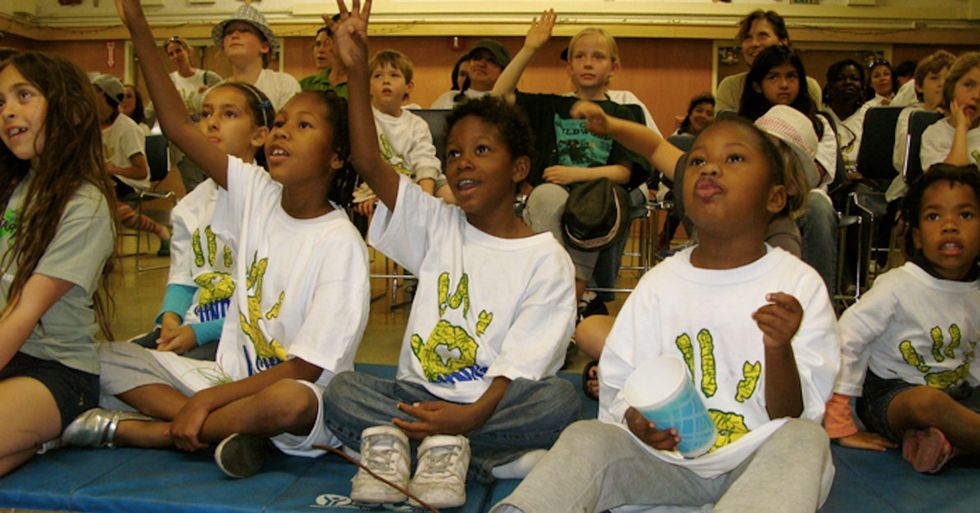 In 2002, entertainment producer David Levinson wanted to do something good for his community. So he called up a local shelter for runaway teens and asked what type of help they needed.

He says the caseworker he spoke to said something really interesting: "She said, 'Our kids don't need help. They want to give help.'"

That surprised him. The kids at the shelter didn't have much — and yet, they still wanted to give to others.

All photos courtesy of Big Sunday.

With this in mind, Levinson organized a carwash to raise money for Students Run LA, which trains at-risk youth to run a marathon. Volunteers came not just from the shelter as well as many different youth groups from around the city.

"They raised about 400 bucks, which was nice," Levinson says. "But what was great was that they did it together."

That was an aha moment for Levinson, who decided his goal wasn't community service, but rather, community-building.

From this, Levinson created Big Sunday — a nonprofit with the mission of using service to bring communities together.

Big Sunday does lots of things to help build communities. They organize events to bring people together. They coordinate places for people to donate their old stuff. They find sponsors to create emergency funds for people in need. And, no matter the person, they will always have something for everyone to do — and everyone is always welcome.

Not all of their events are service-oriented, but service does make up the majority because, according to Levinson, its inclusivity makes it the best way to bring people together.

Of course, some people can't afford to prioritize helping others because they're in need of help themselves. And that's OK! But for anyone with a desire to help, no limitation will prevent Big Sunday from finding a way for them to do so.

Some people have time, but no money — they become volunteers. Some have money, but no time — they provide funding for projects like the Big Sunday Emergency Fund, which helps people with unexpected expenses.

For any prohibitive activity — something physical, something expensive, something difficult, something that requires a specific skill — Big Sunday finds a way for everyone to participate.

At the heart of Big Sunday's mission is Levinson's belief that community-building is what the world needs most.

"There's so much hatred and animosity out there," Levinson says, "but it's really fear." Fear of the unknown, fear of things we've never interacted with and can't understand — these are the stumbling blocks that Levinson believes community-building can help eliminate.

"Now that person you're standing next to isn't the lady from Beverly Hills or the kid from Watts, or the family from Boyle Heights or the couple from Koreatown. They're a person with a name," Levinson explains. "It's way hard to hate somebody when they have a name."

The best thing about Big Sunday? They want to get everyone involved.

"We specialize in the reluctant volunteer," Levinson laughs.

The Big Sunday team prides itself on being able to find a helpful activity for absolutely everyone. Their list is long — offering everything from monthly events to service-oriented special occasion planning to coordinated donations and more. And their staff is just waiting to meet their next request. "We like a challenge," Levinson claims.

So get involved! It's super easy to get involved with Big Sunday — after all, their mission is to make volunteering possible for everyone! You can get started on their about page, which has lists of their established activities, to give you an idea of what you might be interested in.

But you don't need to work with Big Sunday to do something good for your community. Check your local churches, scout groups, community centers, and volunteer organizations. If you have money but no time, consider donating cash or food to a worthy cause. If you have time, but no money, look for clean-ups or food drives where you can spend a Saturday or two!

Big Sunday isn't just an organization — it's an attitude, and a shining example for communities everywhere. No matter where we live, who we are, or what we bring to the table, we have something we can do to help another person. And in doing that, we might just bring our community a little closer.

Clarification 7/25/2017: The headline has been changed to clarify Levinson's role.