A Professor Looked At 15 Years' Worth Of Information. Then A Designer Packed It Into 1 Punchy GIF.

A law professor looked at "credible allegations" of voter fraud in the U.S. from 2000 to 2014. Here's what he found in one mesmerizing GIF. 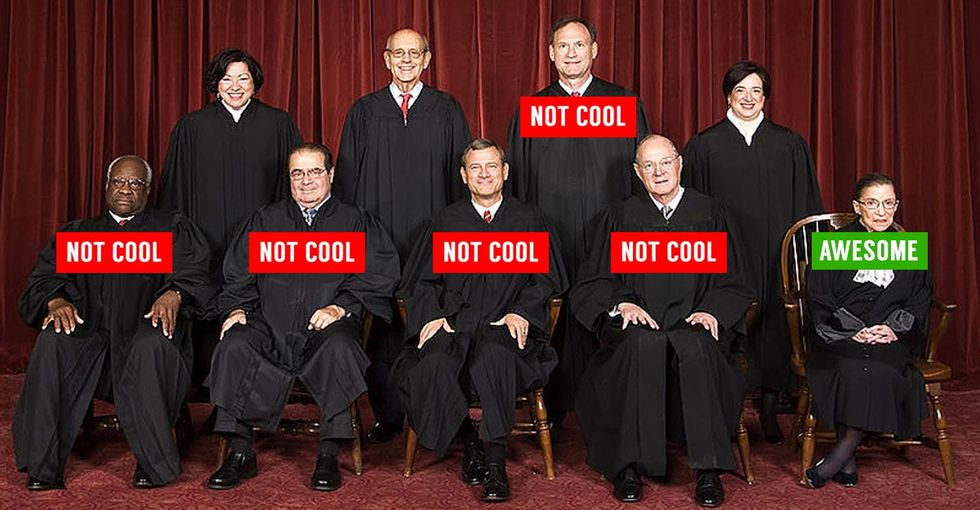 Conservative politicians across the U.S. are using voter fraud as a scapegoat to pass laws — like voter ID requirements or reduced early voting — that are making it harder for certain constituents to cast their ballots. Such laws were once considered to be wholly unconstitutional.

The Voting Rights Act of 1965 (VRA), which basically banned racism at the polls, is the most successful civil rights law ever enacted by the U.S. Congress. But in 2013, the Supreme Court — specifically Justices Roberts, Scalia, Kennedy, Thomas, and Alito — undid a VRA provision that cleared barriers to voting in areas where minority voters were heavily silenced at the polls.

The decision was a shameful exercise in either missing the point (which is really hard to believe) or simply not giving a shit about the consequences. Their message: Times have changed! Just look at all these black people and their votes!

Not all of them agreed. Justice Ginsburg whipped her opposition with a 37-page dissent endorsed by Justices Sotomayor, Breyer, and Kagan. She reminded them that Congress (with good reason and strong bipartisan support) had already decided the VRA should stay intact and in full force for the time being.

Then she said they were wrong. Straight up. "Egregiously" at that.

The majority decision even acknowledges voter discrimination is still a problem:

To which Ginsburg responded with this:

Instead of ruling in a way that might actually help to eliminate that discrimination, those five justices thought it best to reduce what protections minority voters do have.

And these headlines are just a sampling of what's happened since: