A dad took these touching photos of his 'astronaut' son exploring planet Earth. 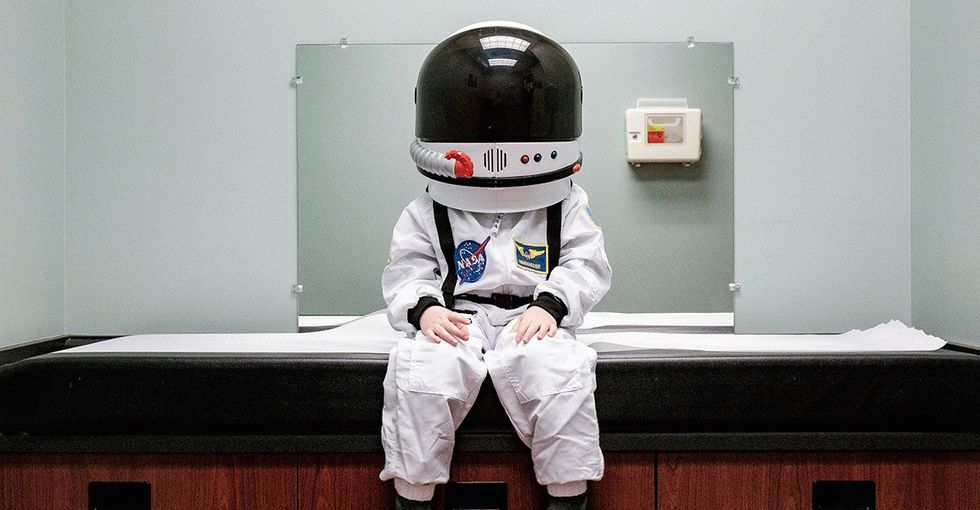 Photographer Aaron Sheldon was at the doctor's office with his son when he stumbled onto the perfect metaphor for childhood.

"[Harrison] was scared to sit on the exam table because it's a little high upfor a 3-year-old," Aaron recalled. "So I'm talking with him about being brave, and whattypes of people are brave and have to sit on exam tables. And we'retalking about policemen and firemen and he said, 'Hey, how aboutastronauts? Are they brave?'"

"So he pretended he was an astronaut, sat on the table, and did agreat job."

It was there that Aaron's adorable photo project, "Small Steps Are Giant Leaps," was born.

When Harrison had to go back for another checkup a few months later, Aaron brought his camera. And a space suit.

Astronaut Harrison sits on an exam table. All photos by Aaron Sheldon, used with permission.

From that exam room, the two traveled to all sorts of new places. Like a far-off land known only as "Target."

And to a tiny indoor ocean. Otherwise known as a swimming pool.

Harrison gears up for a swim.

And to a place filled with the most fantastic creatures you've ever seen.

Harrison watches a polar bear at the zoo.

The more places they went, the more Aaron started to realize that this astronaut thing went beyond just bravery. It was about exploration and boldly venturing into unknown territory.

Which, for kids, is almost everywhere.

Even somewhere as simple as a movie theater.

Harrison chows down on popcorn at the movies.

Aaron says the project highlights just how curious his son and kids like him are about the world.

You can tell by the questions Aaron's son asks during and after shoots.

Harrison gets ready for a plane trip.

Looking at the photos "would prompt him to think of aquestion about space or photography," Aaron said. "Like, 'How do astronauts do laundry in space?'; 'Do they eat spaghetti and meatballs in space?' So that was kind of theincubator of new ideas: OK, how can we show that question in a story,in an image?"

He also wants other parents to see the photos and remember that our kids are like little Earth-bound astronauts: endlessly curious and on a mission to better understand, well, everything.

Harrison waits patiently at the laundromat.

"We need to help them be explorers inour everyday world."

When we get irritated or frustrated or exhausted by our kids (and as a fellow parent, believe me, I know we do), Aaron hopes we'll take a moment to remember what the world looks like through their eyes.

Or, in Harrison's case, their visor.

Harrison waits at the barbershop.

One day last year, Aaron and Harrison were riding around their hometown of Columbus, Ohio, on a bus. And it was a blast ... at first.

Aaron said his son was having the time of his life just looking out the window at the passing scenery. But then, "it's time to get off the bus, and he's just not listening to me and I'm starting to get a little ticked off," Aaron said.

"And I realize: 'Hey, this isn't justa bus ride for him. This is a new experience. So chill and give him acouple of minutes to really enjoy it.'"

Though the project is nearly over and Harrison will eventually outgrow his space suit, that powerful lesson will stick with Aaron forever.