A Buffalo body shop knew just what to do when a truck covered in racist slurs pulled in. 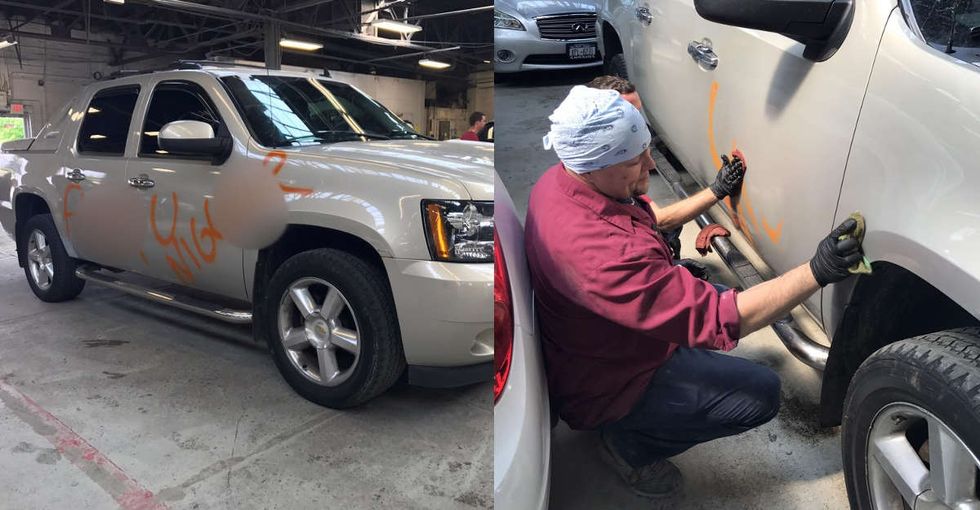 On a beautiful Tuesday morning, a customer pulled up to Frank Todaro's Buffalo, New York, body shop in a silver truck covered in ugly racial slurs.

"I noticed the shop got real quiet, so I turned around and I saw this graffiti with terrible language on it. And I was like, ‘Wow is this really happening?'" recalls Todaro.

Henry King, the truck's owner, told WKBW that the graffiti appeared the morning after an altercation with two neighbors, who allegedly told the South Buffalo resident, "We'll get you kicked off this street. You don't belong here."

Police are still investigating the incident.

"I really didn’t ask any questions — how, what, why. I just knew we had to get that off," Todaro says.

Like a NASCAR pit crew, Todaro's team jumped in and scrubbed the car clean. The paint was off in 30 minutes.

After finding the right chemical to remove the paint, seven or eight of the shop's technicians worked on the truck until the graffiti was removed, according to Todaro.

"It was nice to have that feeling around the shop that everyone came together and cared for someone else," Todaro said.

When the cleanup was complete, Todaro refused to take King's money.

“Buffalo is the city of good neighbors. That’s our foundation. We should be known for that," he said.

Many commenters praised the shop for quickly and selflessly supporting a neighbor.

Other Buffalo residents noted that the attack accurately reflects their experiences of racism in the city and urged their neighbors to do better.

"After the first day of just watching this go viral and people commenting, sharing their own opinions and their own experiences, I’m like, 'Wow, there is a problem out there, and you know what, if I’m going to be that guy that kind of gets things going and hopefully more positive comes out. I am all about it," Todaro says of the reactions to the post.

Todaro and his team received a proclamation from Buffalo's mayor and calls from local politicians in the days since the spur-the-moment repair.

King, too, called to express his thanks.

Still, the shop owner says, the experience has taught him that when it comes to bigotry and racism, there are still many repairs to make.

"We won the battle on this one, but we've still gotta win the war."