A Boston bus driver surprised passengers with an unscheduled stop — for lemonade.

After a lemon of a winter, a Boston bus driver enjoys some lemonade with his passengers. 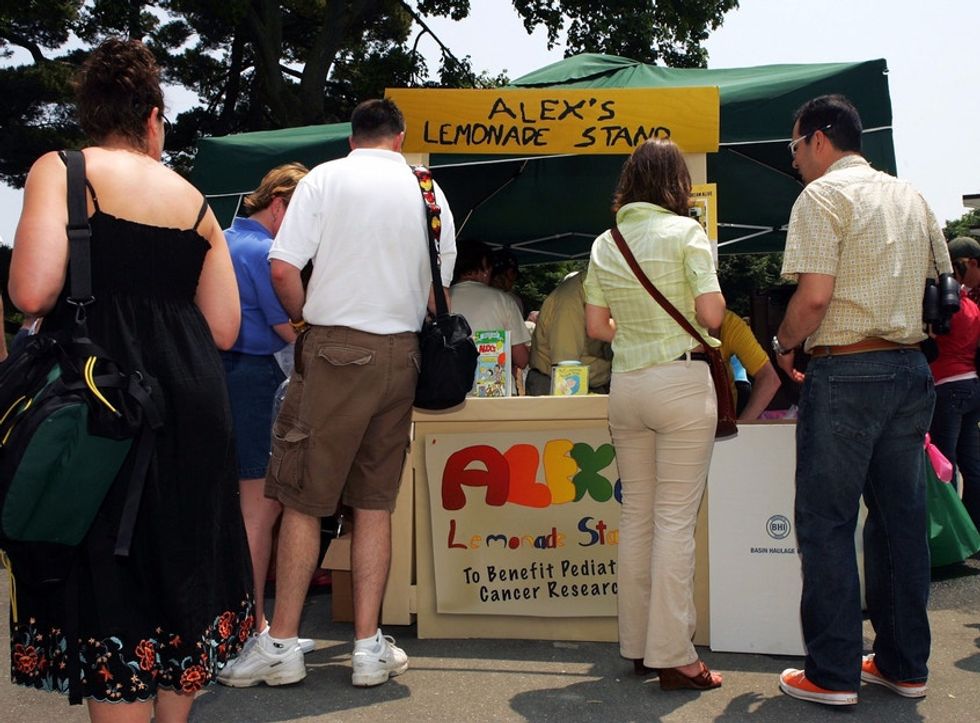 Depending on the day, "driving in Boston" sounds like either a joke or a horror film.

GIF from factually recorded U.S. history and definitely not this commercial for Dodge Challenger.

But one MBTA bus driver found a way to make the summer heat a little more bearable for his passengers.

During an afternoon lull on his daily bus route, driver John Lohan made an unscheduled stop at a local lemonade stand.

Lohan noticed a lemonade stand in the neighborhood of West Roxbury during his daily rounds along the 35 bus route. After a few trips back and forth, Lohan decided to make his move.

He waited for things to quiet down in the afternoon, when there were only six passengers on the bus, and he made sure that they were all in agreement before he made the stop.

“I said to them, 'If any of you are in a hurry or need to make a connection, I'll keep going,'" he told Boston.com. “I thought it would take 90 seconds, tops. ... I wait at red lights longer than that."

Of course, they went along with it. Wouldn't you?

GIF from "Good Will Hunting."

He treated all six passengers to a deliciously affordable beverage, then got right back on the road.

Not every bus driver can stop to buy lemonade for his passengers. But maybe if we found a better way to fund public transportation, we could worry less about getting where we need to go and enjoy a few more unscheduled pit stops along the way.

At the very least, maybe we could get some new trains that didn't fail in two separate record-breaking blizzards more than 30 years apart.

GIF from "Good Will Hunting."

It was a small gesture, but Mr. Lohan's generosity made more than a few people's days.

If nothing else, stories like this are a good reminder that the side-of-the-road lemonade stand industry is basically immune to inflation — despite the fact that Boston is one of the most expensive cities in the country.

“The lemonade only cost 50 cents and he bought seven of them. He gave us 10 dollars, so, he's awesome!" 14-year-old lemonade stand owner Erin Starkey told reporters from WBZ-TV.

"I was surprised by that," Lohan said. "Decades ago, it was 50 cents. ... It was the cheapest round, the least expensive round I ever sprung for."

Cheers to that, Mr. Lohan. Sláinte!