A big, beautiful wall is currently being built across the entire width of Africa. 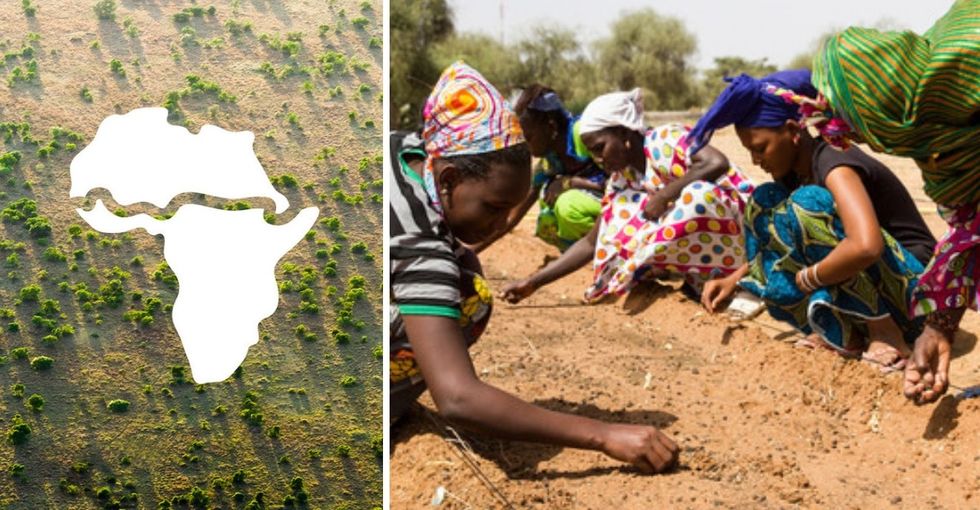 While the U.S. argues over building a wall on the U.S. Mexican border, a massive "green" wall is going up across the continent of Africa.

When we think of walls, we usually think of a structure to keep people and/or animals out or in. But The Great Green Wall being built across Africa has an entirely different purpose.

The Sahel region, along the southern border of the Sahara desert, is one of the poorest regions in the world, and one of the most impacted by climate change so far. Persistent drought and lack of food has created conflicts over resources and forced people to migrate away from the region. The Great Green Wall project is an ambitious attempt to mitigate the environmental and economic effects of climate change in this part of Africa, utilizing nature itself to do so.

The goal is to create a 6000-mile (8000 km) "living wonder" across the entire width of the continent, from Senegal to Djibouti, restoring the degraded land and creating millions of jobs in the process. The project involves planting trees and other vegetation—hence the "green wall"—but its impact goes far beyond adding greenery to the landscape.

The Great Green Wall tackles many issues at once, including many of the UN's Sustainable Development Goals.

The UN hopes to make significant progress in improving the lives of people around the globe by 2030 with its Sustainable Development Goals. The Great Green Wall helps with many of them. It helps battle poverty by providing food security and opportunity for farming and businesses to grow from it. It supports gender equality by improving water security so women and girls don't have to walk long distances to collect water and by empowering women with new opportunities. It provides environmental resistance to climate change in an area where temperatures are rising the fastest.

It's also an important symbol of peace, unity, and hope in a world that can sometimes feel hopelessly divided. Twenty African nations have joined together on the project since its inception a decade ago. The wall is now 15% underway, and while ongoing support is needed for the work to accelerate to a good pace, the groundwork has been laid. If this desolate region can be brought to life environmentally, economically, and societally, it will show the rest of the world what's possible when diverse people work together toward a common goal.

When complete, the Great Green Wall will be the largest living structure on the planet, three times the size of the Great Barrier Reef.

The project an enormous undertaking for sure. But many international organizations, including the African Union, European Union, World Bank, and United Nations are partnering to bring it to fruition.

The African Union Commissioner for the Sahara and Sahel Great Green Wall Initiative, Elvis Paul Tangam, says that the key to the project is how it involves and empowers the people. “The Great Green Wall is about development; it’s about sustainable, climate-smart development, at all levels...It’s about ownership, and that has been the failure of development aid, because people were never identified with it. But this time they identify. This is our thing.”

"The Great Green Wall promises to be a real game-changer, providing a brighter future for rural youth in Africa and a chance to revitalize whole communities," says Monique Barbut, Executive Secretary of the UNCCD. "It can unite young people around a common, epic ambition: to ‘Grow a 21st Century World Wonder,' across borders and across Africa."

And Ireland's President, Michael D. Higgins says, "With its capacity to unite nations and communities in solidarity, the Great Green Wall represents the best kind of international cooperation that will be required in this century."

A wall that unites people and creates economic opportunity for people living on either side of it? So here for it. If you are too, The Great Green Wall asks that you share the project and sign the Great Green Pledge that helps them have more power to lobby governments and organizations to support the movement.

Let's let the world know that this is the kind of wall we'd like to see more of.

A groundbreaking 360° film about Africa’s Great Green Wall, and the people growing it.

Surprise, it's anxiety. Here are 5 things that can help rein in anxiety throughout the day.