9 reasons why writing in a journal should be your only resolution in the new year.

If you've got a list of resolutions, this one thing will cover them ALL. 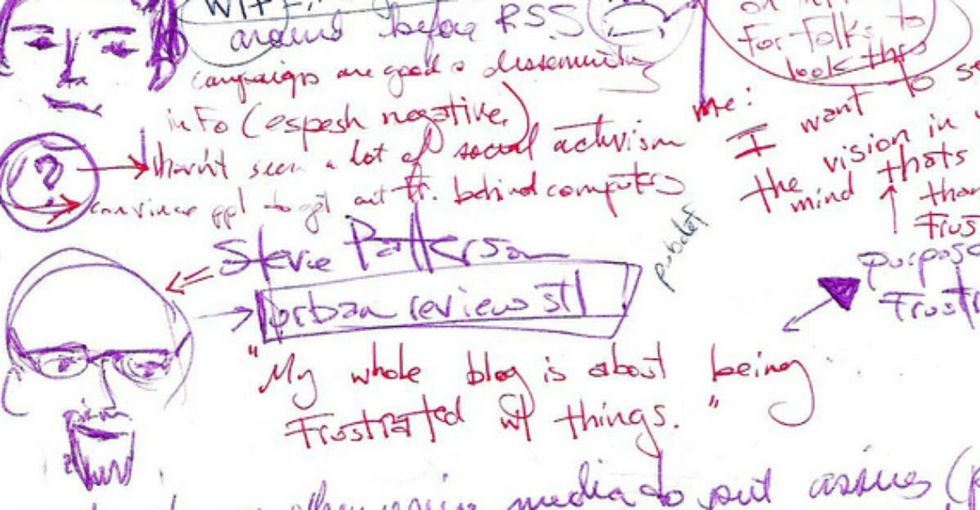 Once upon a time in Texas, some computer engineers got fired.

After four months of unemployment, not a single one of them had found a new job. Something a little surprising gave them hope ... and better results in their job hunt.

In a study led by University of Texas researcher James W. Pennebaker, a group of the jobless professionals got in touch with their feelings and wrote about it, diary style. 20 minutes. Writing. Emotions. Repeat. Daily.

It's what Pennebaker wanted to test. Could this emotional writing practice reduce stress and help solve the problems these engineers were having?

"Listen, Frank. We're going to write about our feelings in a diary. Just accept it." Image by SDASM Archives/Flickr.

In the group that got all up in their feelings and put them down on paper, more than 26% found a new job.

"So if i don't address my feelings in an emotional journal, I'm less likely to find my next job? Whoa." More on this below. Image by Nasjonalbiblioteket/Flickr.

The other engineers wrote about non-emotional stuff like time management, or they wrote nothing at all. Less than 5% of those in this group found a job.

And as it turns out, emotionally expressive writing is useful for so much more than finding a job.

It can improve your health, your happiness, your goals, your love life ... everything! And for those of you thinking, "Whatever diaries are dumb," try thinking of journaling or freewriting as PRODUCTIVE MEDITATION.

Writing in a journal should be your ONLY New Year's resolution this year. And I'll prove it to you.

Name a resolution, and we'll keep it using — you guessed it — a writing practice! Let's get started.

1. If your resolution is to be healthier:

All images by Lori White.

Journaling can help you with your immunity.

Ever heard of T lymphocytes? Me neither, until I learned that regular journaling can strengthen these important immune cells. More research, chronicled at PsychCentral, also shows that journaling can reduce symptoms of asthma and rheumatoid arthritis.

2. If your resolution is to be happier:

Emotional writing can heal mental and emotional wounds ... after about two weeks.

I know I've been cheerleading for emotional journaling, but know this: the first two weeks will be rough. In one study, during the beginning of emotional writing, subjects got more depressed, and some of their blood pressures even increased!

Writing about trauma is uncomfortable in the short run, but after a brief period of time, the costs can disappear and the benefits emerge ― and they last.

As one participant admitted, "Although I have not talked with anyone about what I wrote, I was finally able to deal with it, work through the pain instead of trying to block it out. Now it doesn't hurt to think about it."

3. If your resolution is to lose weight:

Journaling helps process emotions, which are an often ignored obstacle to weight loss and healthy habits!

OK, first, you're perfect the way you are. And second, long-term studies found no relationship between only weight loss and health improvements. Weight loss doesn't contribute to a healthier you, but healthy habits do! So maybe think about a resolution to form some healthier habits.

The emotional aspect of weight loss is overlooked, and journaling is proven to help with emotional processing.

"When people are given the opportunity to write about emotional upheavals, they often experience improved health. ... They go to the doctor less. They have changes in immune function. If they are first-year college students, their grades tend to go up. People will tell us months afterward that it’s been a very beneficial experience for them."

4. If your resolution is to be less stressed:

Pennebaker believes that writing about stress can help you come to terms with it.

5. If your resolution is to heal that cut on your finger from when you were slicing the holiday ham:

6. If your resolution is to get a new job:

Journaling can help you find a job faster, but not necessarily get more interviews.

An interesting tidbit on this from the study of the laid off engineer story at the very beginning of this article:

"Interestingly, expressive writing didn't land the engineers any more interviews. It just increased the odds that they were hired when they did have an interview. "

And if you think the whole thing about the expressive journal-ers getting jobs is a little too good to be true, it's worth noting that the scientists who first did this study have been able to replicate it many more times.

7. If your resolution is to write more:

Journaling daily not only can help heal the emotional blocks of insecurity, perfectionism, and other fun demons ... it can train you to just write, censor-free, and to just generally make things.

Emotional journaling, aka the concept of morning pages, is a basic tenet of a book titled "The Artist's Way" — which has sold millions of copies. Plus, it's a book I like and I create things for a living!

8. If your resolution is to be a more creative soul:

Journaling can get your right brain involved.

Problem solving gets relegated to your analytical left brain most of the time, but sometimes analyzing a problem ain't gonna cut it. That's when it's great to get your RIGHT brain involved. And one of the quickest ways to do that is through writing!

There's even a theory, based on MRI imaging, that activating your brain and then resting it leads to more a-ha moments.

9. If your resolution is to be better at your job:

Plain ol' emotional writing will make you miss less work and get better grades, but writing about how your work is making a difference might make you better at that job!

A study of fundraising found that when people working in stressful fundraising jobs journaled about how their job was making a difference for just a few days, it increased their hourly effort by 29% over the following two weeks.

Excuse me I have some deadlines coming up, so I'm gonna take 20 minutes now to write about how this article is making a difference ... hold on a sec.

Start journaling when you feel ready. Set a time. Stick to it.

Get in your feelings.

Pennebaker's research has shown that writing about traumatic events only improves health when people describe facts and feelings.

Throw in some gratitude and maybe a line or two about achieving future goals and dreams and the difference you're making in life. Don't be too strict.

Trust yourself! You know what's making you feel better!

You'll be in good company. George Washington, Virginia Woolf, Pablo Picasso, Richard Branson, and Mark Twain are just some of the members of the diary club.

Don't worry about the writing being "good." Writing is like dancing! We can all dance in our own way ... and no one gets to tell you you're dancing "wrong" because they're not you.

It might sound pretty out there to be all "I'm writing in my diary now!" — but there's nothing flighty or youthfully naive about decades of scientific research that show that something as simple (AND FREE!) as writing for 20 minutes a day can change your life.

Resolutions are annoying: They make you feel bad, and they're often just plain annoying to try to meet. I'm sharing this so that we can all be done with those obnoxious, shaming, icky-feeling New Year's resolutions.

All we need to do to get started on a better year — according to research! — is put a pen to paper. It's free. It's easy. And you deserve ALL that it can bring you in 2016.