9 adorable pics of a Brazilian rugby player getting proposed to by her girlfriend.

'I wanted to show people that love wins.' 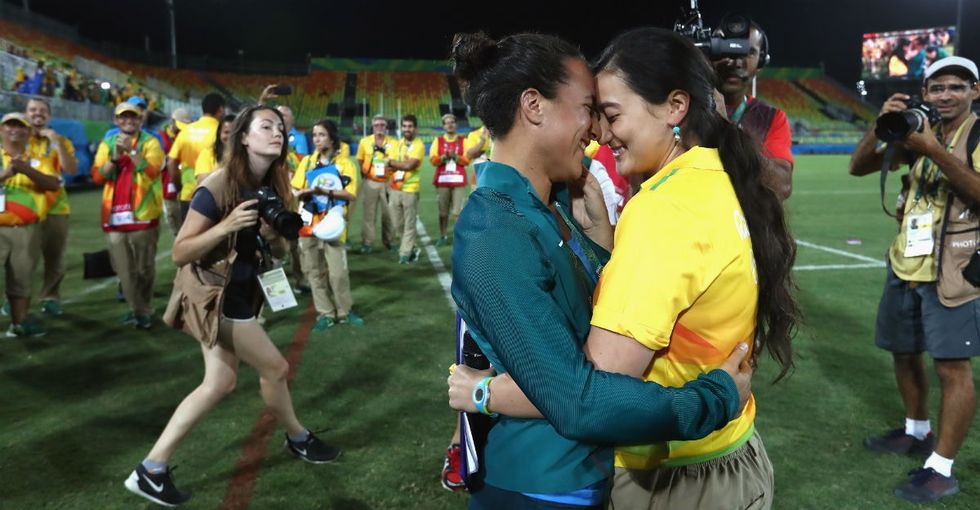 There were tears, laughs, and balloons after the Brazilian women's rugby team finished playing on Aug. 8, 2016, at the Rio Olympics.

But none of that had anything to do with the team snagging a medal (Team Brazil finished ninth, after all).

It had to do with one couple's very special moment.

Player Isadora Cerullo was brought to tears because she'd just been proposed to by her girlfriend, Marjorie Enya.

Cerullo had just worked her magic on the rugby pitch, and Enya is the manager at the Olympic venue where the women's matches went down.

So the scene really couldn't have been more fitting.

The couple, who both live in Sao Paulo, have been together for two years.

And under the bright lights of Deodoro Stadium, they decided to make it official.

"I know rugby people are amazing and they would embrace it," Enya said about the proposal, according to the BBC. "She is the love of my life."

Two women kissing on the world stage shows just how far we've come when it comes to LGBTQ rights and visibility.

Throughout the past 15 years, marriage equality has crept across much of the globe, predominantly in Europe and the Americas. Currently, same-sex marriage is legal nationwide in 21 countries (and counting).

But the global spread of marriage equality doesn't tell the whole story.

Progress usually results in pushback — and it has certainly, and unfortunately, been the case when it comes to the rights of LGBTQ people.

Homosexuality is still banned in far more places than where same-sex marriage is recognized. In several countries, it's punishable by death.

And while many Americans celebrated the Supreme Court decision that legalized marriage equality nationwide, a global push for more tolerance by the Obama administration may be causing more harm than good in certain regions of the globe, as it's "triggered people’s defense mechanism" against progress.

In the U.S., the rise of costly, transphobic "bathroom bills" shows how an unintended consequence of progress is oftentimes emboldened bigotry. And in Brazil — where Enya and Cerullo's engagement was largely met with elation and where same-sex marriage has been legal since 2013 — an alarming rise in anti-LGBTQ violence has put many officials on edge.

The current global climate of LGBTQ rights and protections is far more complicated than many people realize.

Despite the challenges that remain, however, Cerullo and Enya's beautiful engagement reflects a world that's, overall, becoming increasingly open to LGBTQ love.

And the power of that moment certainly wasn't lost on Enya, who said she wasn't nervous to pop the question so publicly.

As she noted, "I wanted to show people that love wins."