7 couples who combined last names and the amazing reasons they did it. 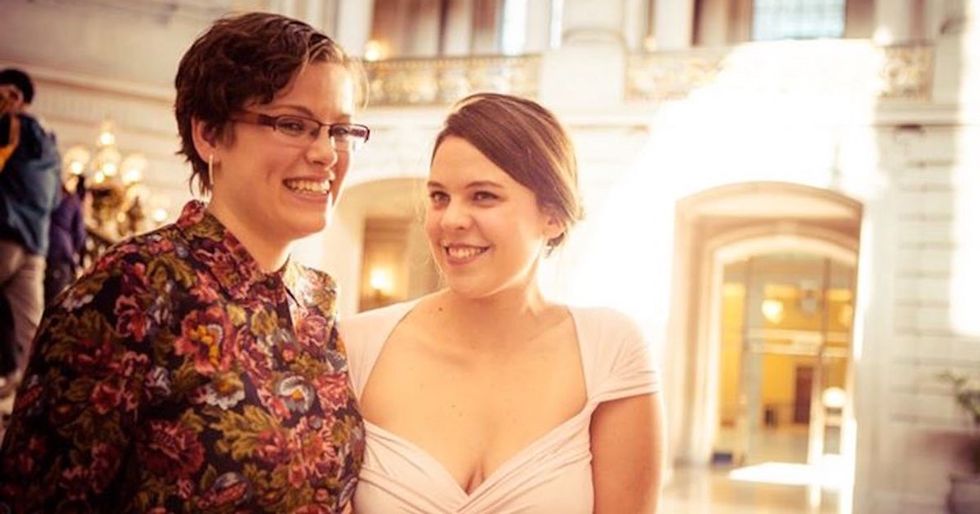 Brangelina. Kimye. "Combined names" are a key step in becoming a celebrity "it" couple. But regular people all over the U.S. are doing the same thing. And making it legal.

I recently read about the phenomenon of married couples legally taking a smushed-together — or otherwise completely invented — version of their last names. Smith and Johnson become the Smithsons, for example. I started asking around: Had anyone else heard of this?

Turns out, a ton of people had. Almost everyone I asked knew a couple who had done it officially, done it unofficially, or at least thought about it.

It might sound kind of odd, but there are a lot of great reasons modern couples choose to do something like this — everything from gender equality (FTW!) to giving the kids a fresh family identity to make their own.

Here are eight forward-thinking, creative, and diverse couples who chose to use a combined name, and why they did it.

These two turned to an unlikely tool when they decided to combine names: an anagram generator.

"We wanted a family name to share with the kids," Carla says. She says they almost had guests at their wedding vote on their top five favorite names. Instead, they wound up choosing on their own.

"We dropped our middle birth names, moved our maiden names to our middle names, and added the new last name," she says.

And lived happily ever after.

When Eckenrode and Christensen got married, they had some understandably complicated feelings about the institution.

Questioning the long upheld standards of marriage gave the couple a lot of freedom to define their own union how they saw fit. The first thing to go? The historic coverture laws that originated today's commonplace tradition of a woman relinquishing a part of her identity, her name, and assuming her husband's.

"We are a family, and we share every part of our lives with each other, and we also desired to share a name," Blair says. "So we got creative and here we are — a nontraditionally created name for a 'nontraditional' marriage."

3. Sally and Ryan Stauffer = the Elainskas

When these two first got married, they did what Sally calls "the normal thing," and went with her husband's last name of Stauffer. A few years later, Ryan had a confession to make — he wished they'd gone another route.

"In the end we decided to combine Gaelic to represent his ancestry and Polish to represent mine," Sally says. They chose words that loosely translated to "people of art," plus a few tweaks to make it easy to spell and pronounce, and suddenly they were the Elainskas.

Their families have had mixed reactions, Sally says, but there's only one thing that really matters: "I couldn't be happier with the decision and with my perfect partner!"

When these two tied the knot, they both agreed it'd be best to keep their own last names. The kids? That was a different story.

"We both felt a little weird about not having a little bit of [both] our names in our kid," Sonia says. That's when they got the idea to combine, and Abramoss just felt like a winning combination.

"My dad did not like it at all, but I think he got over it," she says. "It feels neat to have our kid's' names be a combo of ours, since our kids are a perfect combo of the two of us."

"Sara has a very strong attachment to her family name. She’s the last Kunitake grandchild, and she hesitated to give the name up," Jonah says. "Also, she has invested a lot in building her brand professionally as Sara Kunitake and didn’t want to have to rebuild as Sara Horowitz."

So they merged to become the Horotakes. "We really like the sound of it and it merges our Japanese and Jewish heritage."

Feminism has been an important thread throughout Jesse and Lissa's relationship.

"As our relationship deepened, I felt it was important to be completely equal in our relationship," Jesse says. "We both wear engagement rings. I didn't get on one knee — so we looked each other in the eye."

Jesse says most people are really supportive, or even jealous they didn't think of it, but his parents keep asking, 'Are you really doing that?"

"They may need more time," he says.

Ash says the couple talked a lot about "how neither of us were really attached to our family names and how it would be nice to share a name once we were married."

Her alternative? Pick something random, but meaningful. It got the couple talking about their shared love of outer space.

"We joked about Lightyear, after Buzz, and then one of us — probably me because I am nothing if not overjoyed at being obnoxious — said, 'We should just pick something random ... like, rocketship.' And it just stuck."

From there, the paperwork was a breeze, and the Rocketships became the coolest family in the solar system.