29 pictures of people refusing to accept the status quo. 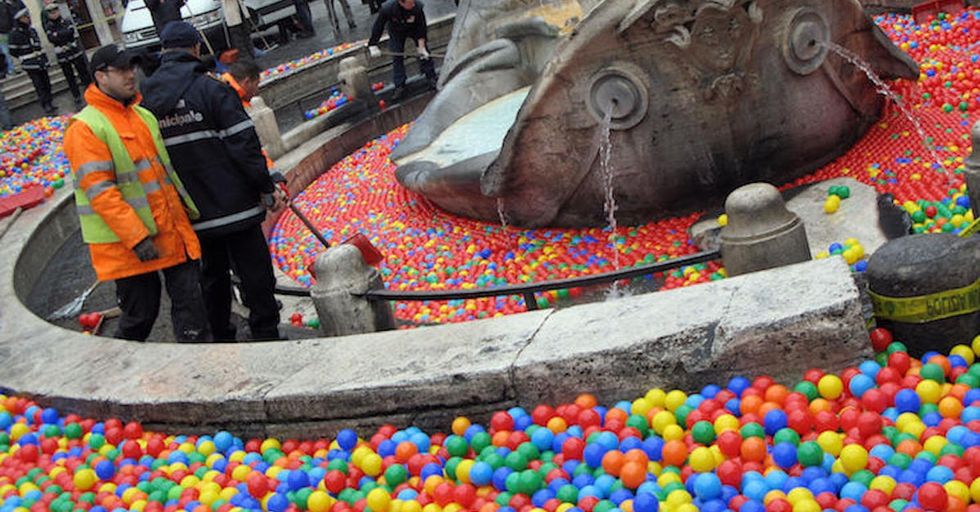 The world is too important, and life is too short, for us to accept that it cannot become better than it is.

And so many people won't. Over the past 100 years, protestors have fought for equal rights, education access, justice, and democracy, creating epic and emotional art in the service of making our world more fair.

These are a few of the sculptures, murals, and performances that caught our eye, moved our hearts, and made us think. Up first: a few classics.

1. In May 1913, women marched in New York's Suffrage Parade carrying the American flag and demanding the right to vote.

2. In June 1917, these pro-prohibition British children took to the streets, demanding sweets.

3. In the 1920s, American Prohibition-era protestors made their desires known with a giant barrel of beer.

4. In May 1989, pro-democracy protestors and art institute students built a 30-foot-tall statue dubbed "The Goddess of Democracy" and planted it in Beijing's Tiananmen Square.

This photo was taken May 30. Just days later, the government tanks rolled in.

5. In San Sebastian, Spain, supporters of the pro-independence movement covered the field of Anoeta stadium in long cloths representing a ballot box.

6. Ukraine is no stranger to political protests. This photo, filled with orange balloons and festoons (the colors of 2004's presidential candidate Viktor Yuschenko), was taken on the sixth day of protests after a disputed election.

Protests would continue for another two months.

Why umbrellas? Because they are excellent for blocking pepper spray, the crowd-dispersing weapon-of-choice for military and police.

8. In the Umbrella Revolution's camps, art installations were a symbol of the creative expression sought by the pro-democracy protestors.

9. In March 2016, thousands of protestors — including these extremely unflattering inflatable effigies — filled the streets of Sao Paulo.

Some protestors use art to call for urgent, transformative justice.

10. These Czech activists imprisoned themselves in Prague's Wenceslas Square to protest unlawful detainment at Guantanamo Bay.

The protestors bound their feet and hands, wore black sacks over their heads, and covered their ears with headphones. They called their protest "Two Cubic Meters of Human Rights," a reference to the size of their cages.

11. A protestor lies on sculptor Ai Weiwei's sunflower seeds installation in London's Tate Modern Museum after covering the piece in flyers demanding the artist's release from detention in China.

Each seed in Weiwei's installation is handmade from porcelain, then hand-painted. There were approximately 100 million made for this piece, which the Tate Modern described as questioning, "What does it mean to be an individual in today's society?"

12. After leaving Johannesburg's 2002 global summit on sustainable development in disgust, environmentalists pinned placards on a nearby art installation. Each one reads "betrayed" in a different language.

13. In September 2010, Argentinian teachers marched through Buenos Aires with a mighty pencil while demanding increases in education funding.

Other times protest art can transform tragedy into beauty.

Between 2010 and 2011, post-electoral violence cost the lives of over 3,000 people nationwide in Côte d'Ivoire.

15. After the only bridge linking Mitrovica's Albanian and Serbian neighborhoods was blocked with cement barricades, Albanian artists created one out of waterlily pads instead.

16. During 2012's Rio+20 conference on sustainability, an artist created these giant fish from discarded plastic bottles.

The fish were hollow, allowing them to be illuminated from within at night. The sign nearby encourages passerby to "Recicle suas atitudes" ("Recycle your attitudes").

17. In May 2013, activists floated 12,000 candles on a river in Sclessin — one for every job that would be lost to closures at nearby steel plants.

19. To set an example for openness and tolerance, German artist Kurt Fleckenstein installed 175 prayer rugs in front of a church in Dresden in 2015.

20. As world leaders negotiated a climate deal in Paris, artist Olafur Eliasson brought pieces of Greenland's ice cap to melt in front of the Pantheon.

Some protests demand a little theatricality.

21. At this 2003 protest in Avignon, French artists staged a "die in" to protest government welfare reform.

22. The face of Greenpeace's Save the Arctic campaign is a polar bear, so it's only natural they'd make a giant one (with moving limbs!) to celebrate their big victory against Arctic drilling.

The polar bear first appeared outside the U.K. headquarters of Royal Dutch Shell in September 2015 after the company announced it was suspending its preliminary drilling campaign in the Arctic. It later travelled to the UN climate talks in Paris. Fun fact: just out of frame in this photo? Actress and activist Emma Thompson.

23. In July 2013 in southern France, the women of Banyuls-sur-Mer put modesty on the line, as they strung garlands of bras across streets to protest a private marina project.

24. On the last day of the COP16 climate talks in Cancun, youth activists dramatized a rescue for the "drowning" negotiators with a giant life preserver and some much-needed optimism.

Other protests use art and performance to transform pain and let people heal.

25. For her entire senior year at Columbia University, Emma Sulkowicz carried her mattress everywhere to protest the school's lack of action on rape allegations she brought against another student.

She even brought the mattress to her graduation ceremony.

26. Shortly after indigenous activists posed for this photo, they finished digging a trench through this temporary dam, "freeing" the Xingu River and allowing it to resume its natural path.

"Pare Belo Monte" translates to "Free Belo Monte." It refers to the site of Brazil's controversial Belo Monte Dam on the Xingu River. When completed, the dam will displace thousands of Indigenous people and flood their traditional villages.

27. With negotiations once again locked in a stalemate, hundreds of schoolchildren in Durban, South Africa, created this living lion to encourage world leaders at the COP17 climate talks to have courage to effect change.

And sometimes artistic protests can look a little silly.

28. Whatever your position on Facebook, it's hard not to Like this float of its founder Mark Zuckerberg created for Viareggio's annual Carneval parade.

29. When Italian artist Graziano Cecchini poured thousands of colored balls down Rome's Spanish steps in 2008, he said each one "represented a lie told by politicians."

As folk singer and activist Phil Ochs' lyrics are often paraphrased: "In such ugly times, the only true protest is beauty."

We're proud these artists and agitators are part of our world. They make it — and us — so much better.